Two days back, foreign minister of Tuvalu, a tiny Pacific island nation, delivered his message at the climate summit in Glasgow, standing in knee-deep sea water.

The message was powerful and the way he conveyed it was even more powerful.

The minister, Simon Kofe, issued a warning to the world, mostly the developed one, to cut emissions drastically or the country might go under water soon.

“Climate change and sea level rise are deadly and existential threats to Tuvalu and low atoll lying countries,” Kofe said. “No matter if we feel the effects today like we do in Tuvalu, or in 100 years, we will all still feel the dire effects of this global crisis one day,” the foreign minister added.

Kofe’s real message for the world

By standing knee-deep in seawater, Kofe wanted to highlight how his low-lying Pacific island nation has been negatively impacted by climate change and faces the threat of disappearing completely if sea levels continue to rise.

He expressed optimism about the progress at COP26 so far, but said the good thoughts should be backed by adequate action on the ground. 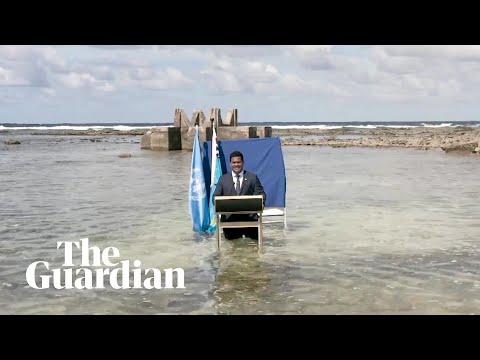 “The reality here as you’ve seen in the video is rising sea levels, a lot of erosion along the coast, we’re seeing a lot of extreme weather and changes in weather patterns,” he said.

Explaining why he chose to deliver his message in this unique manner, Kofe said, “These are the challenges that we are facing in Tuvalu and we were hoping that the media could convey these messages to the people to show what we’re dealing with on a day to day basis.”

Kofe said his country is seriously thinking about the worst case scenario where an entire nation may need to be relocated within the next 50 to 100 years because of rising sea levels.

“Although we are advocating for larger nations to make stronger commitments against climate change, we are being proactive to prepare for the worst case,” he said.

Fiji has publicly offered to provide refuge to all of Tuvalu’s 11,000 residents, but Kofe believes that may not suffice. “It’s a quick fix and defeats the advocacy that we’re promoting at the moment,” he said.

“Relocation is a last resort for us and the primary focus for us is to get bigger nations to cut back on their emissions.”

Impact on the ground

The island nation has seen sea levels rise by about 0.5 cms every year since 1993. Scientists say that by the end of this century the levels could rise by a meter or more. Tuvalu and other low-lying nations in the Pacific could be submerged.

Looking at the worst case scenario, foreign minister Kofe said they are looking at all the possible legal options to keep ownership of its maritime zones and recognition as a state.

Also read: Why India is upset over deliberations at the ongoing COP26 summit

A Tuvalu’s tourism website stated that about 4,000 of its citizens are already living in New Zealand, and the government aims to relocate the rest at the earliest.

What did other island nations say at COP?

A good number of island nations could not send their representatives to Glasgow due to COVID restrictions. Ironically, these countries are at a greater risk and demand immediate action. “Our islands are slowly being eaten by the sea, one by one. If we do not reverse this trend, the Maldives will cease to exist by the end of the century,” Maldivian President Ibrahim Mohamed Solih told CNBC.

As per one World Bank report, the Marshall Islands may lose their status as a nation if sea levels continue to rise at this rate.

The leaders of island nations have unequivocally asked the world’s big polluters to put emissions cut as their top priority.

India Prime Minister Narendra Modi, speaking at Glasgow, highlighted the threat to small island countries due to climate change and launched an initiative, titled Infrastructure for Resilient Island States (IRIS), an effort to save the most vulnerable countries from going under water. UK Prime Minister Boris Johnson seconded India’s proposal.

Prime Minister Modi had said, “Small island developing states were most threatened with climate change. For them, it is a matter of life and death, a challenge to their existence. Calamities due to climate change can become a devastation for them. It is not only a challenge for their lives but also for their economy.”

Also read: Meat on the plate? Livestock rearing for food major cause of climate crisis

On what is India doing for these countries, Modi said: “We trained their citizens in solar technologies and made continuous contributions for development. India’s space agency ISRO will build a special data window for SIDS (small island developing states). With this, SIDS will continue to get timely information about cyclones, coral-reef monitoring, coast-line monitoring etc. through satellite.”