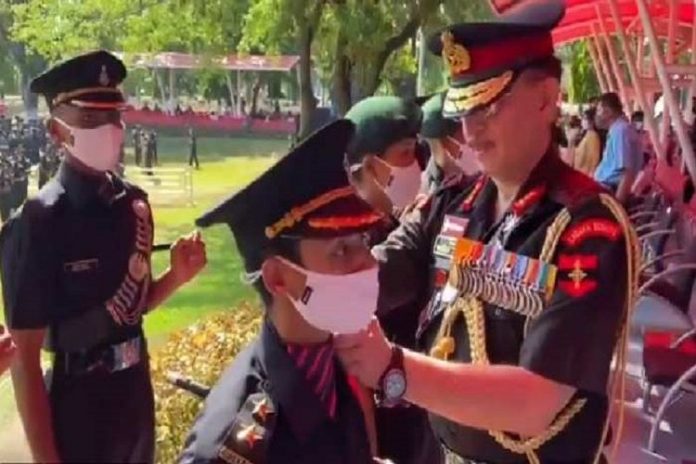 Nitika Kaul is an extraordinary woman, something which the Indian Army recognised on Saturday (May 29) at a ceremony at the Officers Training Academy in Tamil Nadu’s Chennai. Befittingly, Chief of the Army’s Northern Command Lieutenant General YK Joshi placed stars on Kaul’s shoulders.

“#MajVibhutiShankarDhoundiyal, made the Supreme Sacrifice at #Pulwama in 2019, was awarded SC (P). Today his wife @Nitikakaul dons #IndianArmy uniform; paying him a befitting tribute. A proud moment for her as Lt Gen Y K Joshi, #ArmyCdrNC himself pips the Stars on her shoulders!” PRO Udhampur tweeted and shared a video.

The couple got married in April 2018 and Maj Vibhuti Shankar Dhoundiyal was due to return home in April 2019 to celebrate his first wedding anniversary. On February 14, 2019, Major Dhoundiyal was one among the four soldiers —Sepoy Hari Singh, 27, Havaldar Sheo Ram, 37, and Sepoy Ajay Kumar, 27 — who died in an 18-hour gunbattle in Pulwama, Kashmir.

Major Dhoundiyal was awarded Shaurya Chakra for his sacrifice for the nation.

That forces eliminated, among others, a Jaish-e-Mohammad terrorist suspected to be the key conspirator in the terror attack a week earlier in the same district that led to the killing of around 40 CRPF personnel.

Nitika Kaul then was an employee with a private firm. “I went back to work around 15 days after my husband’s death because I wanted to keep myself busy. It is natural to have a breakdown, but we needed to accept the situation. I had to find positivity in my daily routine and stand up on my feet once again,” she added.

She then joined Officers’ Training Academy in Chennai. Eleven months of training later, she has now been commissioned into the Ordnance Corp of the Indian Army, posted under the Southwestern Command. It was her way of paying a “real tribute” to the officer and feeling close to him.

“I took my own time to recover from the loss… I decided to sit for the Short Service Commission examination as my thoughts about him lingered on. The big day came when I filled up the form in September last year. I decided that I want to walk on a similar path like my husband,” Kaul said.