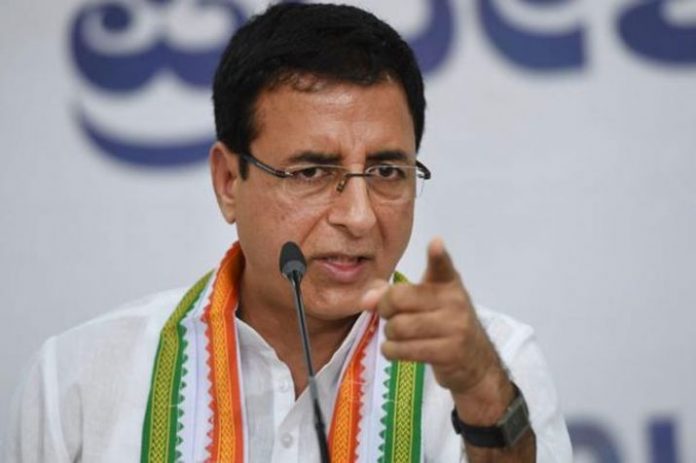 Surjewala asked TMC to introspect if it was going to end up strengthening the BJP by trying to carve a space for itself in Goa. Pic: PTI photo

The Congress on Tuesday (October 27) slammed the Trinamool Congress for its high-powered and aggressive bid to participate in the upcoming Goa Assembly elections reminding the Mamata Banerjee-led party that elections is not “tourism”.

As the TMC is poised to make an aggressive pitch in the forthcoming Assembly elections in Goa with West Bengal Chief Minister Mamata Banerjee all set to visit the seaside tourist haven later this week, the Congress asked the party to introspect whether it was going to end up strengthening the BJP by trying to carve out a space for itself in Goa.

Senior Congress leaders like Adhir Ranjan Chowdhury had been criticising the TMC for throwing in their hat in the ring for the Goa elections. However, on Tuesday, the Congress officially questioned the TMC’s move, said an Indian Express report.

Pointing out that every party has a right to fight elections, Randeep Surjewala, the Congress communication department head said that TMC had fought the last Assembly elections in Goa as well. “But what did they do for five years after that? Elections are not tourism where you fight one election and then you go away and reappear after five years,” he said. Elections are not tourism where you go to Goa for two months or five months… and then go back, he reiterated.

Also read: Will riding on star-power help TMC in its Goa gambit?

According to Surjewala, the Congress is the only party fighting for Goa, transparency, accountability, people of Goa and the rights of the people of Goa. But the other political parties like the BJP was fighting for the kind of corruption that the state had seen.

The Congress leader then went on to ask other political parties to also  ask themselves if they were strengthening the cause of BJP or were they really in contest for their own place in the polity of Goa? He added that he would leave it to them to decide the answer to that question.

Surjewala went to on to point out that Congress is the “only political party” which has fought the BJP and the Narendra Modi government’s policies for the last seven years and not crumbled, he said.

The Congress, he said, has fought the BJP “single-handedly, without being cowed down and without retracting even a step, at the cost of many personal sacrifices. Though they have been persecuted recklessly and unjustifiably by the ruling dispensation.”

However, Opposition parties, caved in to pressures like ED notices. Whenever Opposition party leaders are summoned to ED offices or CBI offices, “even unjustifiably”, he said, which is also part of a “persecution plan”, many times the leaders have retracted or some of them have compromised.

That is because it is the duty of the Congress to stand with everybody who is being wrongly persecuted, he reiterated.roa Assembly elections reminding the Mamata Banerjee-led party that elections is not “tourism”.