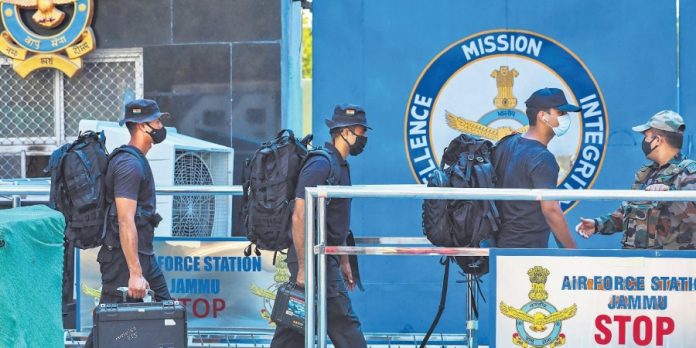 A top Indian Army commander has said the technology used in the June 27 twin drone strike on Jammu air force station hinted at the involvement of “state support” as well as the role of Pakistan-based Jaish-e-Mohammed and Lashkar-e-Taiba.

“We are well aware that these assets and tech — drone warfare, for example — cannot just be made on the roadside. These indicate state-supported systems and technology… and state-supported, or state-sponsored, technology definitely indicates Jaish and Lashkar,” Lt General DP Pandey, Corps Commander of the 15 Corps in Srinagar told NDTV.

He refused to share details of the ongoing investigation, but said an initial analysis of data indicated “a certain level of guidance from state actors”.

He said the Army is “well aware that these assets and technology like drones and drone warfare are state-supported systems” and that such threats may even increase.

The armed forces, he said, will look to stay ahead of such threats and are exploring options and proactive solutions to address all such challenges.

“The capability or capacity exists to modify drones, which are locally available as well… with a certain level of guidance from state actors. They can be modified to carry out these attacks,” the General said when asked if the drones were locally operated or were flown across the border.

General Pandey also indicated a link between the level and intensity of terror attacks in Jammu and Kashmir with the relative stability in the region. He said the Kashmir Valley security situation was potentially the best in the past four to five years.

“Every time there is stability in the Valley, or the Jammu & Kashmir region, as we have seen recently, there will always be the introduction of new systems or actors to counter this… and the next level in this is greater deniability – an attempt to say this is possibly internal,” he said.

“This (new) threat is live and going to keep on increasing… but we are aware and have taken advanced measures over the past few days to re-orient ourselves. As a unit, the Army is looking for proactive solutions and I am very confident that we can take care of this challenge as well,” the General told the news channel.