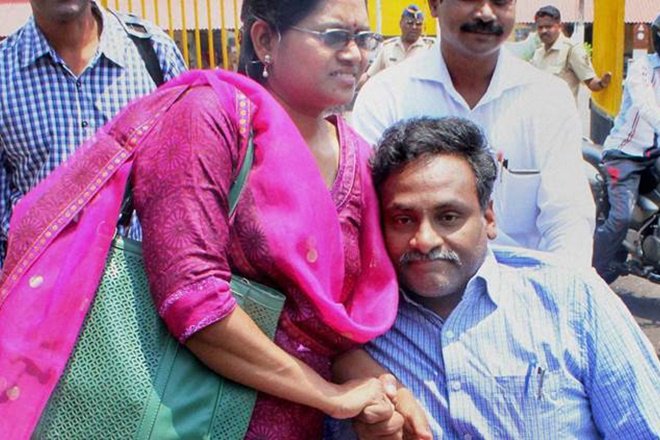 The Maharashtra government on Friday (July 24) opposed the bail plea of former Delhi University professor G.N. Saibaba in the Bombay High Court bench, saying he is being given proper medical care and kept in a separate cell where there is no fear of contracting COVID-19.

Saibaba, who is wheelchair-bound with over 90 per cent physical disability, is serving a life sentence for links with Maoists and has been lodged in the Nagpur Central Jail since May 2014.

Last week, he filed a bail application before the Nagpur bench of the Bombay High Court.

Saibaba, in his plea filed through advocate Nihal Singh Rathod, sought bail on medial grounds so that he can get treatment outside. The former university professor had submitted that he has been suffering from various ailments and was prone to
contracting COVID-19 after outbreak of coronavirus in the jail.

The court had issued a notice to the state government on his bail plea which was heard on Friday by the division bench of Justices Z.A. Haq and S.M. Modak.

The state, through Special Public Prosecutor P.K. Sathianathan, in a reply submitted to the HC said it is disputing Saibaba’s right to claim bail again.

His earlier bail application had been rejected on March 25, 2019, Sathianathan said. Secondly, he is being given proper medical care in the jail’s hospital, the state told the court.

“He is in a separate cell, where there are no coronavirus cases. Hence, there is no need to release him on bail,” the prosecution said.

The bench posted the matter for further hearing on July 28.

On Monday disability rights organisation National Platform for the Rights of the Disabled sought the help of National Human Rights Commission to shift Saibaba who suffers 90% disability from a post-polio paralytic condition to a medical facility.

The organisation’s General Secretary Muraleedharan said in a letter to NHRC chief HL Dattu that Saibaba was ” mistreated and mishandled by the police and jail staff on a regular basis.”

“Apart from it being overcrowded many guards and prisoners (one even close to his cell) have been infected with the dreaded Covid-19. Given his weak physical condition, his co-morbidities, cardiac problem combined with high blood pressure as also a compromised immune system, there is every possibility that Dr Saibaba may contract the virus,” he wrote in the letter, reported Scroll.

Over 150 prisoners and 40 staffers of the Nagpur Central Prison have so far tested positive for coronavirus. The jail houses nearly 1,800 inmates while 265 police
personnel are attached to it.

In March 2017, a sessions court in Maharashtra’s Gadchiroli district convicted Saibaba and four others, including a journalist and a Jawaharlal Nehru University (JNU) student, for Maoist links and engaging in activities amounting to “waging war against the country”. The court held Saibaba and others guilty under the stringent Unlawful Activities Prevention Act (UAPA).

Heavy rainfall throws life in Mumbai out of gear