US President Donald Trump, who is on a two-day visit to India, said on Tuesday (February 25) that he didn’t discuss the violent attacks that are ripping new Delhi apart with Prime Minister Narendra Modi and that it was “up to India”.

When questioned about his opinion on the Citizenship (Amendment) Act (CAA), he refused to take a stand and said, “I don’t want to say anything on CAA. It is up to India. I hope it will take the right decision for its people.” 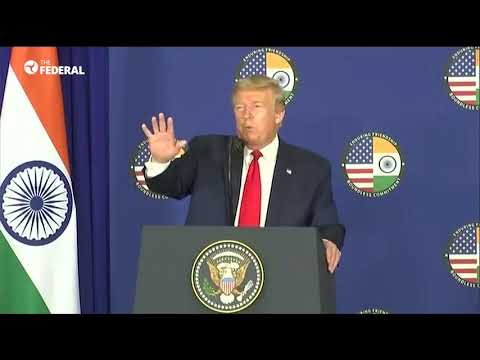 Trump kept his answers vague for most of the questions and justified it saying, “I’m gonna be not at all controversial because… I don’t want to blow the two days plus two days of travel on one answer, one little answer, like John will ask me one simple question and you will blow it out and that will be the end of the trip. You won’t even talk about the trip. So I will be very conservative in my answers if you don’t mind.”

Describing the Kashmir issue as a “big problem” between India and Pakistan, he said it was “a thorn in a lot of people’s sides” and reiterated his offer to mediate between the two countries to ease the tension.

“If anything I can do to mediate, I will do,” he said, adding that Pakistan figured in his talks with Modi. “I have a good equation with Pakistan PM Imran Khan. They are working to control cross-border terrorism,” he said.

With the outbreak of coronavirus across the globe, Trump said without further elaboration that they were “very close to a vaccine”.