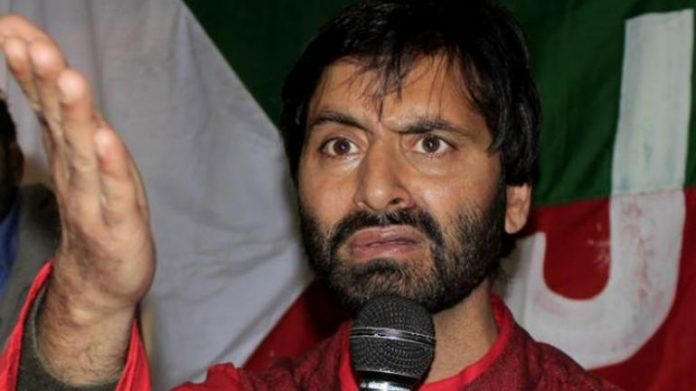 A Delhi court on April 10 sent JKLF chief Yasin Malik to NIA custody till April 22 after it sought his custodial interrogation in connection with a case related to funding of separatists and terror groups in Jammu and Kashmir.

Malik was produced before special judge Rakesh Syal where the National Investigation Agency sought the courts permission to arrest the accused which was allowed, a court source said. The NIA then arrested him inside the courtroom and sought 15-day custodial interrogation.

While seeking his remand, NIA counsel informed the special judge that it has credible evidence to prove that Malik received funds from Pakistan. The proceedings in the case were heard in-camera. Malik was brought to the national capital after a court in Kashmir granted his transit remand to the NIA. He was shifted to Delhis Tihar Jail on April 9 after the NIA secured his production remand in connection with the terror funding case. Malik will be facing questions from the NIA related to funding of his organisation.

The Jammu and Kashmir High Court has reserved its judgment on a plea of the CBI for reopening three-decade-old cases in which Malik was an accused. The Jammu Kashmir Liberation Front (JKLF) chief is facing charges of kidnapping and murder for being allegedly involved in abducting Rubaiya Sayeed, daughter of then Union Home Minister Mufti Mohammad Sayeed in 1989, and killing of four Indian Air Force personnel in the early part of 1990.

NIA had approached a special court in Jammu, seeking Maliks remand for custodial interrogation in the terror-funding case. The NIA probe seeks to identify the chain of players behind the financing of terrorist activities, pelting of stones on security forces, burning down of schools and damaging of government establishments. The case also names Hafiz Saeed, the Pakistan-based chief of Jamaat-ud-Dawah, the front for the banned Lashker-e-Taiba, as an accused.

Besides, it names organisations such as Hurriyat Conference factions led by Syed Ali Shah Geelani and Mirwaiz Umar Farooq, the Hizbul Mujahideen and the Dukhtaran-e-Millat. The JKLF was recently banned under the Unlawful Activities (Prevention) Act.