Congress MPs staged a walkout in Lok Sabha on Monday (March 16) amid an uproar as party leader Rahul Gandhi was not allowed to ask a second supplementary related to wilful defaulters after he raised the issued the bad loans during the Question Hour.

In his first supplementary during the Question Hour, Gandhi sought a list of 50 top wilful defaulters, including funds given and the amount written off by banks, but he did not get a proper answer in a written reply, reported news agency PTI.

The House soon witnessed noisy scenes and a walkout by Congress members as Gandhi was not allowed to ask a second supplementary. The protests came after Speaker Om Birla announced the end of Question Hour at noon as the designated time for it is 11 am to noon. 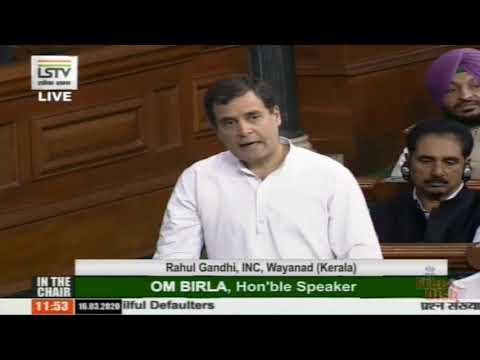 “The Indian economy is going through a difficult period. Banking system is facing difficulties, banking is failing and many more banks are going to fail. One of the main reasons for the failure of banks is stealing of bank money by a large number of people. The prime minister had said those who have stolen the money will be brought back and punished. But I have not got the answer to my simple question,” said Gandhi.

When Minister of State for Finance Anurag Thakur started replying to the question, Gandhi and Congress leader in the House Adhir Ranjan Chowdhury protested, saying Union Finance Minister Nirmala Sitharaman, who was present in the House, should reply.

Thakur said the Congress was trying to put the blame on the NDA government for irregularities committed in banks during the previous UPA regime. The minister said the Narendra Modi government reviewed the asset quality of banks and performance of banks has improved to a great extent due to various steps taken by the government.

“The list of all bank defaulters above ₹25 lakh loans is available on the website of the Central Information Commission. I have the list and if the Chair allows me, I am ready to table it in the House,” said Thakur.

Thakur said ₹4.8 lakh crore defaulting loans were recovered ever since the Modi government came and a number of steps were taken, including enactment of the Fugitive Economic Offenders Act, so that the guilty can be punished.

Referring to the recent Yes Bank crisis, Thakur said the union finance minister had already said banks are safe and the money deposited in Yes Bank is also safe. 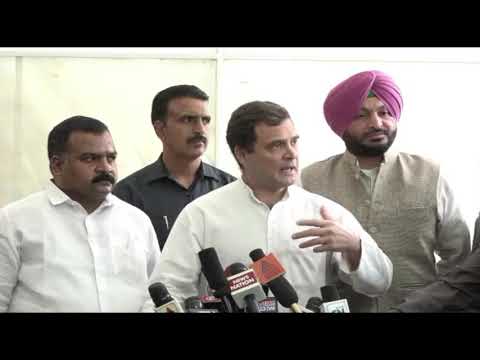 He said there were many instances of irregularities during the UPA government and that include forcing bankers to buy paintings at exorbitant price — in an indirect reference to Rahul Gandhi’s sister Priyanka Vadra selling a painting to the Yes Bank founder Rana Kapoor, who was recently arrested.

The Speaker then ended the Question Hour and moved to the next item of the agenda. With this, Gandhi strongly protested saying he should be given the opportunity to ask the second supplementary as is the norm. However, the Speaker ignored Gandhi’s request and continued with the business of the House.

Gandhi was immediately joined by Chowdhury and other members. At least a dozen Congress members rushed to the Well of the House and started sloganeering saying grave injustice has been done to the Congress leader. As the Speaker continued to ignore the protests, the Congress members staged a walk out.