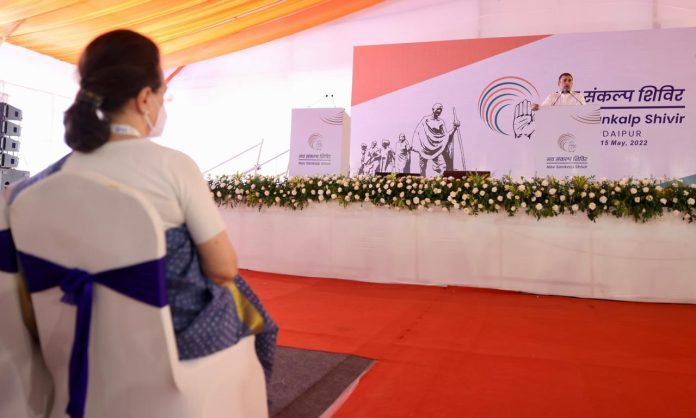 Sonia Gandhi watches as her son and Congress leader Rahul Gandhi gives a speech at the conclusion of party enclave Chintan Shivir in Udaipur, on Sunday, May 15, 2022.

The Congress Working Committee (CWC) on Sunday (May 15) gave its approval for several organisational reforms including the ‘one family, one ticket’ rule with a rider as it adopted the ‘Udaipur Nav Sankalp Declaration’.

As the party’s three-day ‘Chintan Shivir’ concluded in Udaipur on Sunday, the party’s president Sonia Gandhi said, “Detailed recommendations of the organisation group that are not part of the Declaration will be acted upon expeditiously.”

Also read: What the 6 Congress panels recommended at Chintan Shivir

“A task force will be set up to drive the process of internal reforms discussed in Udaipur. Reforms will cover all aspects of organisation. The composition of the task force to be notified in the next two to three days,” she added.

The ‘one family, one ticket’ rule that was given the nod comes with an exception for the second member of the family who has worked for the party for five or more years.

As part of the declaration, it was also announced that no person should hold one party position for more than five years while the CWC and all levels of the party will have 50% of members aged below 50.

Among other recommendations by the party’s six panels that got CWC’s approval include, in the next 90 to 180 days, all vacancies across all party units will be filled up, Mandal-level committees to be formed, Public Insight Department for scientific feedback from the public to be set up, a national training institute to train party leaders and workers on various issues to be set up, At AICC, a department for election management will be formed, and performance audit of office bearers across all levels to be carried out.

Also read: Chintan Shivir: Sonia as tough on Modi govt as on Congress revival, but…

Ajay Maken, the party’s general secretary, said that six reports were submitted and some of the recommendations are part of the declaration while other proposals are under consideration by the Congress president.

Also, it was decided that the party’s coordinator for North-eastern states to be made ex-officio permanent invitee to the CWC.

To mark the 75 years of India’s independence, the Congress will organise 75 km padyatras by district committees.

The party also decided on a complete overhauling of the communication strategy.

The CWC also cleared the recommendations of the social empowerment panel. It includes the party’s demand for legislative backing for SC/ST sub-plans, the immediate passage and implementation of the women’s reservation bill.

The party will launch leadership missions for SC, ST, OBC, and minorities, and will set up a social justice advisory panel to give regular inputs to the Congress president. There will be six monthly special meetings across different levels of party organisation dedicated to discuss issues concerning SC, ST, OBC and minorities.

The Congress also demanded a caste census and said it will launch an agitation for this. The party will also launch a ‘Sadbhavna Mission’ to reach out to SC, ST, OBC, and minorities.

The youth panel’s recommendations were also approved with a cut-off age for tickets to contest all polls.

There is a reason we allow conversation. This party’s DNA is a conversation between the people of this country.