More than 60 Congress MPs, detained by the police during the party’s protest in Delhi against price rise and unemployment, were released after about six hours, Congress general secretary Jairam Ramesh said on Friday.

Former Congress chief Rahul Gandhi, Priyanka Gandhi Vadra, K C Venugopal, Adhir Ranjan Chowdhury and Gaurav Gogoi were among the MPs detained and taken away from Vijay Chowk, outside AICC headquarters and other places in the national capital. They were released later in the evening.

#WATCH | Police detain Congress leader Priyanka Gandhi Vadra from outside AICC HQ in Delhi where she had joined other leaders and workers of the party in the protest against unemployment and inflation.

She was later detained by police during the Congress protest pic.twitter.com/s7lqYqsnEh

“Congress MPs have been released after being detained for almost 6 hours for protesting peacefully and democratically against price rise, unemployment and GST,” Ramesh, who had also been detained, tweeted. The Congress has opposed the Goods and Services Tax (GST) hike on essential items. In a statement, the Delhi Police said a total 335 protesters, including 65 MPs, had been detained under the Delhi Police Act in order to “maintain law and order” in the area. Intimation about detention of MPs/MLAs is being sent to the respective competent authorities, the police said. 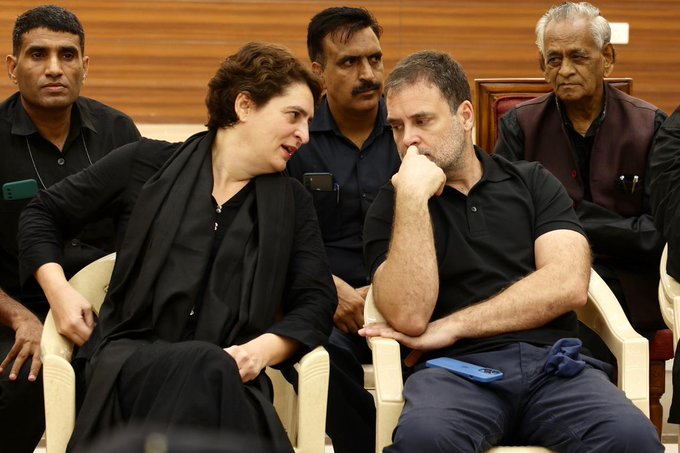 Democracy is a memory. pic.twitter.com/CnobQwSm44

“When the police personnel moved in to contain the situation, the protestors tried to obstruct the police officers from performing their duties, manhandled and injured them. Appropriate legal action is being taken into the matter,” the police said

Speaking to the media at Vijay Chowk, Rahul  said, “We are here to raise the issue of price rise,” adding that “democracy is being murdered”.

Asked if the MPs were manhandled, he answered in the affirmative.

He alleged that some of the party MPs were even “beaten up” by police. “Again today, Congress MPs denied democratic right to protest against price rise, unemployment and GST. Bundled into police vans at Vijay Chowk. It’s clear, only those who are afraid try to instil fear!” party leader Jairam Ramesh said in a tweet.

Chowdhury, the Congress leader in the Lok Sabha, said the party is trying to draw the attention of a government that is completely “indifferent to the astronomical price rise”.
At Vijay Chowk, the Congress protesters were seen resisting police personnel who were trying to take them away.

Congress leader Manish Tewari posted a video message on Twitter from a police bus, saying they were trying to march towards the Rashtrapati Bhavan when they were detained at Vijay Chowk.

Leaders and workers of the Congress assembled at the party headquarters here to participate in the nationwide protest against price rise, the Goods and Services Tax (GST) hike on essential items and unemployment.

The party is also protesting against the government’s alleged misuse of probe agencies to target its leaders.

Earlier, Delhi police has denied permission to the Opposition party to stage a protest in the national capital as prohibitory orders are in place in the New Delhi district.

The Congress workers also seek to gherao Prime Minister Narendra Modis residence.
The protesting Congress MPs tied lemons, chillies and empty packets of dairy products around their neck as a mark of protest.

Meanwhile, security at the Congress headquarters has been beefed up as the party workers, led by Priyanka Gandhi Vadra, are slated to gherao the prime minister’s residence.

A large number of police personnel has been deployed at 24, Akbar road amid heavy rains in Central Delhi.

The entire lane leading up to the Congress office has been barricaded and the media barred to enter the party office.