Congress leader Rahul Gandhi on Sunday slammed Prime Minister Narendra Modi over the ₹59,000-crore deal Rafale deal, into which France has just launched a probe. He posted an image on Instagram with the caption ‘Chor ki dadhi’ (thief’s beard). 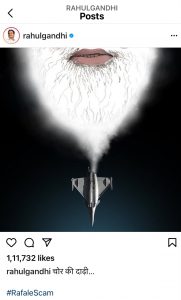 Respnding to the post, BJP IT department in-charge Amit Malviya said on Twitter: “Rahul Gandhi, after having heaped choicest abuses in the run up to 2019, has now stooped down to this level. People across India have rejected him but he is most welcome to fight 2024 elections on this issue!”

Rahul Gandhi, after having heaped choicest abuses in the run up to 2019, has now stooped down to this level.

People across India have rejected him then but he is most welcome to fight 2024 elections on this issue! pic.twitter.com/l85Genh8eg

Meanwhile, the Congress on Sunday said that for the ruling BJP, national security is just a slogan, and translates into little for the welfare of the country.

The Congress has been the strongest critic of the Indian government’s deal with French defence manufacturer Dassault Aviation to purchase Rafale jets for the Air Force. A large chunk of orders under the offset clause in the ₹59,000-crore deal went to Anil Ambani-led firms, which led to accusations of crony capitalism against the Narendra Modi government.

Related news: ₹59,000-cr Rafale deal back in the spotlight as France orders probe

“Post-Independence, all Central governments have regarded national security as a serious issue and have refrained from politicising it,” Congress national spokesperson Pawan Khera was quoted as saying at a press conference.

France has launched probe into the Rafale deal over allegations of corruption, favouritism, influence peddling and money laundering. Khera asked to know why the Centre was yet to respond to it.

“There has been no response from the Centre till now. What was Rafale? It was an inter-governmental deal. France has launched an investigation. On the other hand, forget about investigation — the Indian government has not even given one comment. And this is the government which is only known for talking,” he said. “The Prime Minister, Defence minister and other members of the Cabinet are silent.”

The ‘echo of this silence’ is audible globally, he added.

On Saturday, the Congress demanded a joint parliamentary committee (JPC) probe into the Rafale deal. The corruption in the deal had finally been exposed, it said, adding that its leader Rahul Gandhi’s stand had finally been ‘vindicated’.

It may be recalled that Rahul had repeatedly alleged corruption in the Rafale deal, but an Indian court dismissed all charges.