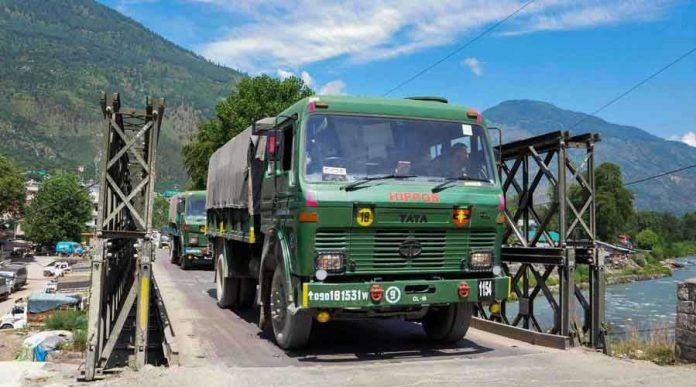 India and China have deployed thousands of troops in Ladakh and elsewhere following the stand-off in June last year. File Photo

The 12th round of India-China Corps Commander-level talks are rescheduled for August first week, but there are apprehensions in New Delhi about a fresh intrusion in the Demchok in eastern Ladakh where the Chinese have reportedly put up tents on the India side of Charding Nala, a media reports said on July 26.

Government officials described the people occupying these tents as “so-called civilians,” saying that even though India has been asking them to go back, “their presence remains,” The Indian Express reported.

Demchok has witnessed face-offs, leading the two sides to agree that Demchok and Trig Heights were contentious points on the Line of Actual Control during meetings of the India-China joint working groups in the 1990s.

Five friction points have been added to the LAC in eastern Ladakh over the last year after the current stand-off began, officials told The Express.

These five friction points are KM120 in the Galwan Valley, PP15 and PP17A in the Shyok Sula area, Rechin La, and Rezang La, officials said.

China had suggested the 12th round of talks on July 26, but India, which observes the day as Kargil Day to commemorate the victory over Pakistan in the 1999 Kargil war, suggested postponement by a few days. The talks are now likely in the first week of August, or earlier, sources said.

The last Corps Commander-level talks to discuss the disengagement and eventual de-escalation in eastern Ladakh, where India and China are involved in a stand-off since May 2020, were held in April this year.

The two sides have been in touch over the hotline. Since the last year’s standoff, the two have exchanged messages nearly 1,500 times over the hotlines at Daulat Beg Oldie and Chushul, The Express quoted the officials as saying.

The talks have not progressed as India has insisted on disengagement from all friction points first, but China wants de-escalation, and for the additional troops in the depth areas to go back to their original bases before the rest of the friction points are disengaged.

A senior government official said the “situation is stable” though it is not yet at “2019 level.” There have not been “any transgressions” by China since February. “They are willing to disengage, but they like to negotiate,” the official was quoted as saying. Disengagement will happen, he said, “but it will take time”.