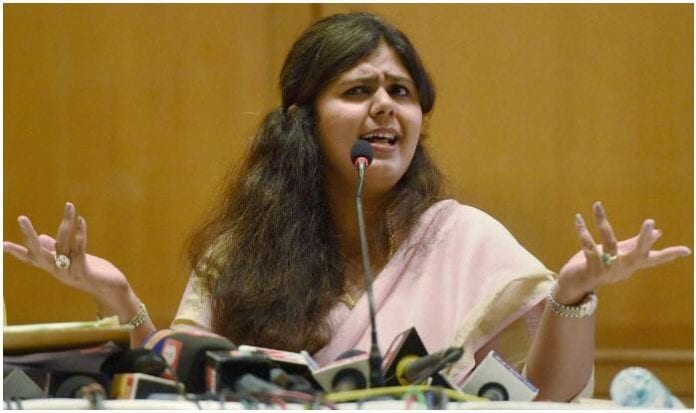 The Bharatiya Janata Party’s (BJP’s) lotus symbol as well as images of Prime Minister Narendra Modi and other leaders are missing from the banners put in place for the gathering called on Thursday (December 12) by party leader Pankaja Munde at the memorial of her late father Gopinath Munde in Maharashtra’s Beed.

Pankaja, who belongs to an OBC community, had caused a flutter earlier this month with a social media post on her “future journey” in view of the changed political scenario in the state.

Recently, BJP’s former ally Shiv Sena formed a government with the support of the NCP and Congress.

Pankaja had invited her followers to Gopinathgad in Parli on December 12 on the occasion of the birth anniversary of late Munde, a BJP stalwart. Though Pankaja, a former minister, had clarified that she was not leaving the BJP, all eyes are on the Thursday’s event expecting that she might make some announcement.

On the eve of the programme, Maharashtra BJP unit chief Chandrakant Patil said on Wednesday (December 12) that nobody would quit the BJP when asked about Pankaja.

Queried on the photos of the PM, BJP chief Amit Shah and senior Maharashtra leaders not finding space on the banners in Beed, Pankaja’s sister and local BJP MP Pritam Munde said they didn’t want to keep Gopinath Munde’s image restricted to any particular political party.

“My father was a public personality. Hundreds of thousands of people from various regions and political background have deep respect for him. We have not used the BJP’s poll symbol, lotus, as well as photos of Modiji or Shahji because we do want to restrict Gopinath Munde’s image to any political party,” she told reporters.

Munde lost the assembly polls against her cousin and NCP candidate Dhananjay Munde from her home turf Parli in Beed district. Since the results were out on October 24, Pankaja did not visit her hometown, raising speculations about her future plans.

BJP veteran and OBC leader Eknath Khadse had publicly alleged that some leaders of the party had played an active role in the poll defeat of his daughter Rohini in Jalgaon district, and Pankaja Munde.

Pankaja and her family members organise a public function at Gopinathgad every year to mark Munde’s birth anniversary. Many senior leaders, including the then chief minister Devendra Fadnavis, had attended the programme in the past.

Pankaja and Khadse are believed to be detractors of Fadnavis.

After Khadse, will Pankaja Munde be the next to leave BJP?