US President Donald Trump and his wife Melania, who arrived in India on Monday afternoon, were accorded a ceremonial reception at the Rashtrapati Bhawan on Tuesday (February 25).

Trump arrived in Delhi on Monday evening for the main and final leg of his maiden trip to India, during which he will hold extensive talks with Prime Minister Narendra Modi.

The US President is accompanied by wife Melania, daughter Ivanka, son-in-law Jared Kushner and top brass of his administration. He arrived in Ahmedabad around noon for a little less than 36-hour-long trip to India. 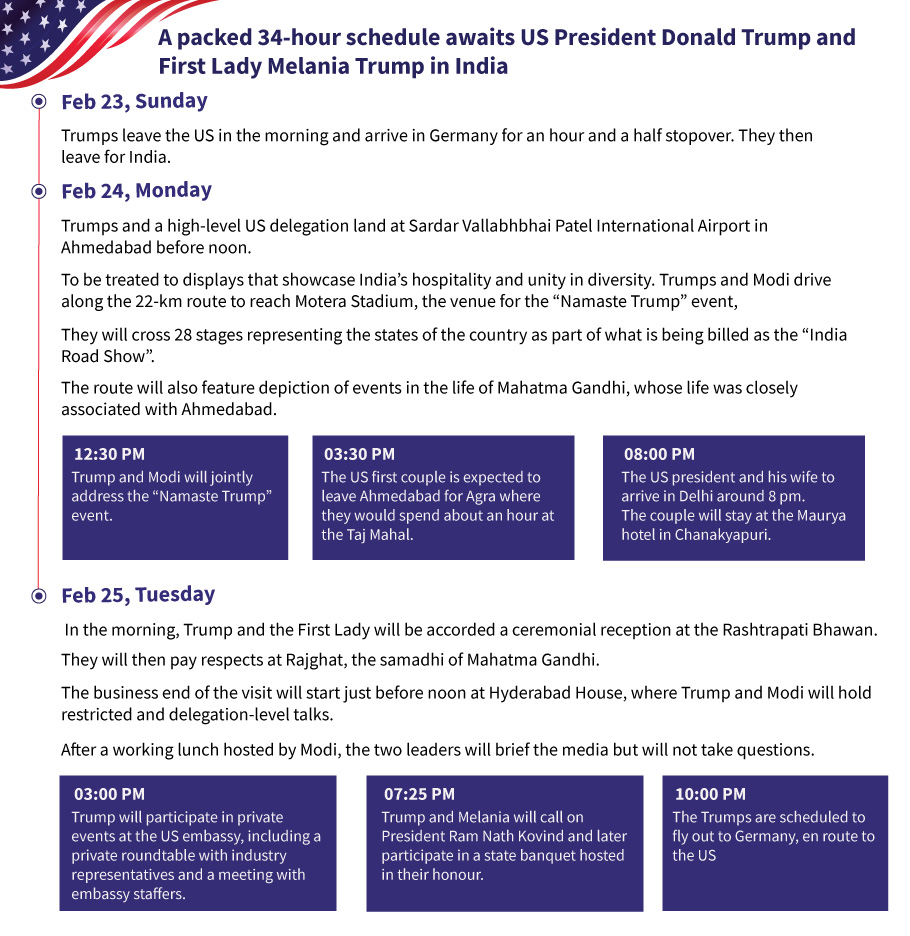 After attending the ‘Namaste Trump’ event at Sardar Patel stadium in Ahmedabad’s Motera, he and his delegation travelled to Agra where they visited the Taj Mahal.

Trump was received at the airport here by Union Minister Hardeep Singh Puri and a number of senior officials. In Delhi, the US President will be staying at the ITC Maurya hotel.

The US first couple will be accorded a ceremonial welcome at the Rashtrapati Bhavan on Tuesday morning, following which they will also pay tributes to Mahatma Gandhi at Rajghat, the memorial of the Father of the Nation.

Subsequently, Prime Minister Modi will host a lunch for the visiting president and his family. Thereafter, the two leaders brief the media but not take any questions. The two heads of state will also hold a restricted and delegation-level talks at the Hyderabad House in the national capital.

At 3 pm, Trump will attend private events at the US embassy, including a private roundtable with industry representatives and a meeting with embassy staffers.

The US first couple will call on President Ram Nath Kovind at 7:25 pm and later participate in a state banquet hosted in their honour. They are scheduled to fly out of India at 10 pm en route to Germany.