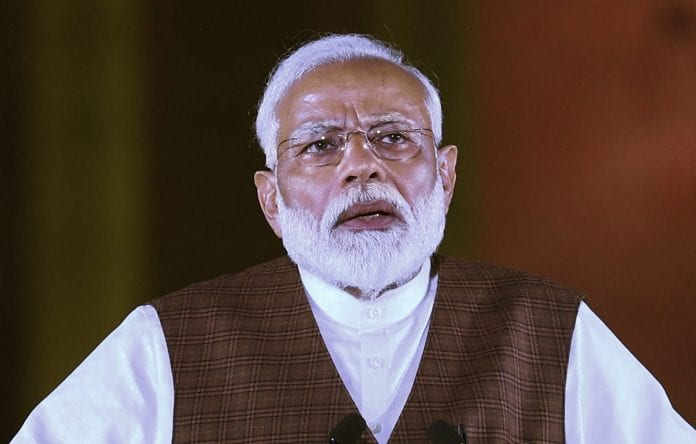 Prime Minister Narendra Modi on Friday (November 8) appealed to citizens of India to maintain peace and harmony after the Supreme Court delivers its verdict in the politically-sensitive Ayodhya land dispute case on Saturday.

In a tweet on Friday, Prime Minister Modi appealed to the citizens of India saying, “it should be our priority to strengthen our tradition of maintaining peace and harmony after Ayodhya verdict.” “Supreme Court verdict on Ayodhya will not be matter of victory or loss for anyone,” he further said. He had earlier asked his ministers and party leaders to refrain from making unnecessary statements on the Ayodhya issue, according to sources.

Security beefed up across India

Meanwhile, security was beefed up across the country in view of the verdict. Authorities said that social media posts will be monitored to ensure that no attempt is made to vitiate the atmosphere by spreading fake or inflammatory content and necessary arrangements have been made to ensure safety and security of religious places.

Chief Justice of India Ranjan Gogoi on Friday morning held an hour-long meeting with Uttar Pradesh Chief Secretary Rajendra Kumar Tiwari and Director General of Police Om Prakash Singh who apprised him about the security arrangements made to maintain law and order in the state. Uttar Pradesh government also announced closure of all educational and training institutes till Monday. Saturday is a non-working day for courts.

The demolition of the Babri masjid at the disputed site on December 6, 1992 had sparked communal riots in the country and the administration has been on its toes ahead of the verdict in the land dispute case.

Multi-layered security arrangements have been put in place in the temple town of Ayodhya, which has been turned into a fortress with deployment of sixty companies (90-125 personnel each) of the PAC and paramilitary forces. Drones and CCTV cameras were also being used to monitor the situation.Be it the area near the Ramjanmabhoomi police station, “karyashala” of Ram Janmabhoomi Nyas or other parts of the town, policemen were diligently checking all vehicles.

Uttar Pradesh Chief Minister Aditynath reviewed the law and order situation in each district and appealed for peace. Similar review meeting were also held in other states following a general advisory issued by Ministry of Home Affairs (MHA) on Thursday asking them to deploy adequate security personnel at all sensitive places.

Delhi Police has beefed up security across the national capital and stepped up partolling in sensitive areas in the city, officials said, adding social media platforms will also be monitored, the police said. Delhi Police will also initiate strict legal action against those found indulging in any activity which may adversely affect the peace and tranquillity of the society, a senior police officer said.

Social media posts and WhatsApp messages that incite communal hatred or violence would draw severe punishment, including jail term, for offenders, the Gautam Buddh Nagar administration said on Friday. The offenders would not only be arrested but action against them would be taken under the Gangsters Act and the National Security Act (NSA), District Magistrate B N Singh said in an official statement.

The Noida Police also carried out a flag march in mixed population areas and densely crowded locations. Clerics and priests of various faiths also renewed their appeal to people to honour the Supreme Court verdict on the Ram Janmabhoomi-Babri Masjid dispute and respect religious sentiments.

“We should all respect the judgment. We should exercise restraint and not hurt religious sentiments of any community,” Imam of the Lucknow Eidgah Maulana Khalid Rasheed Firangi Mahali told news agency PTI. He said an all-religion meeting was recently organised at the Islamic Centre here to discuss several aspects before the judgment.

Also read | Ensure law and order in view of SC verdict on Ayodhya: Gehlot to police

“The Ayodhya case is the biggest and most sensitive case of independent India. Hence, it is the responsibility of every citizen to honour the verdict and maintain peace,” Mahali said. He appealed to all clerics to tell Muslims “not to feel afraid and repose their faith in the Constitution and the judiciary”.

Father Donald De Souza, Chancellor of the Catholic Diocese of Lucknow told PTI, “Ours is a functional democracy, and rule of law has to be followed by all. The court’s judgment has to be fully respected by everyone without any bias. This is called sanskaar.”

Meanwhile, UP Additional Director General of Police (Law and Order) PV Ramasastry said that adequate forces have been provided to Ayodhya and all sensitive districts of the state in good measure. “Stress has been laid on confidence-building measures,” he said, adding that police had undertaken patrolling and different sections of society, be it the dharma gurus, traders or academics had been contacted. “The basic aim of the outreach is to instil a feeling of security,” he said.

ADG (Prosecution) Ashutosh Pandey said barricading had been strengthened at the place of the makeshift temple. The entire town had been divided into 31 sectors and 35 sub-sectors, he said, adding that in case there was a surge of visitors, a “holding area” had been carved on the outskirts of the town so that people could be sent in batches for the darshan of Lord Ram. Pandey said there was no ban on devotees coming to Ayodhya.

Uttar Pradesh Chief Minister Yogi Adityanath had earlier said two helicopters would be on standby in Lucknow and Ayodhya as part of the security arrangements. He also warned that strict action will be taken against anyone trying to disturb the law and order. The Centre had rushed around 4,000 paramilitary personnel to Uttar Pradesh while the Railway police cancelled leave of its force and stepped up vigil at 78 major stations and on trains as part of its security preparedness.

As part of goodwill measures, meetings were being held by police with members of Hindu and Muslim communities prior to the verdict with an appeal to them to maintain calm.