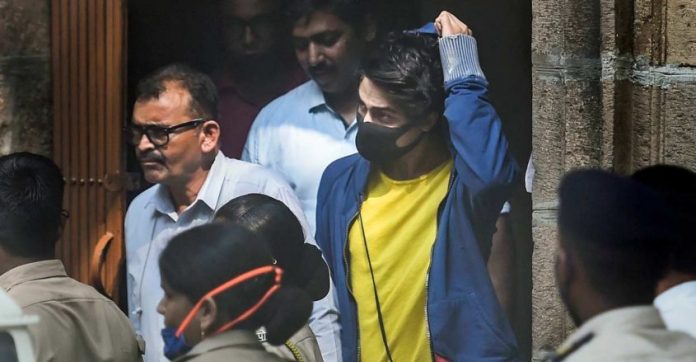 Khan junior, son of Bollywood superstar Shah Rukh Khan, was counselled by NGO workers and NCB officials, including Wankhede, while he was in NCB custody. PTI pic

Aryan Khan, who was arrested in the Mumbai cruise drugs bust case, has reportedly promised Sameer Wankhede, zonal director of the Mumbai unit of the Narcotics Control Bureau (NCB) during a counselling session that he would do good work and “make him proud” one day.

Quoting NCB sources, media reports said Khan junior, son of Bollywood superstar Shah Rukh Khan, was counselled by NGO workers and NCB officials, including Wankhede, while he was in NCB custody. In the course of the counselling session, the actor’s son said after he is released he will work for the “social and financial upliftment of the poor and downtrodden”. And, he added that he would never do anything that would bring him under the public eye for the wrong reasons, said a report in News18.

According to a NCB official, Khan is reportedly to have said that he would do something that will make Wankhede proud of him after he is released from prison.

Aryan Khan is currently lodged in Mumbai’s notorious Arthur Road prison after he was arrested following an alleged drug seizure from a cruise ship off the Mumbai coast on October 2. His lawyers have argued that the NCB officials had intercepted Khan and his friends before he had boarded the ship. However, no drugs were found on him, said an NCB official, reported the News18 report.

On October 7, he was sent to 14-day judicial custody. NCB sleuths said they had seized 13 grams of cocaine, 5 grams of MD, 21 grams of charas, 22 pills of MDMA (ecstasy), and 1.33 lakh in cash during the raid, said media reports.

While they were under NCB custody, Aryan along with seven other accused, including two women arrested by the NCB, went through a counseling session. A special court for Narcotic Drugs and Psychotropic Substances (NDPS) Act cases would pass the order on Aryan’s bail plea on October 20.

Meanwhile, Aryan Khan is said to have spoken with his father Shah Rukh Khan and mother Gauri Khan via a 10-minute video call from inside Mumbai’s Arthur Road Jail.