Cyclone Tauktae, which battered the country from Tamil Nadu to Gujarat in the last 3-4 days, has alarmed scientists for two reasons – its devastating impact and the fact that a storm of this intensity originated in the Arabian Sea instead of Bay of Bengal, which is known as ‘cyclone generator’.

For over 100 years now, the north of Indian Ocean (bordering Indian peninsula) has had a record of generating about five cyclones a year. Till three years back, about four of the five cyclones would emerge in the Bay of Bengal, which is warmer. Of late, the Arabian Sea has been generating more than one cyclone every year, a phenomenon scientists attribute to climate change. In fact, the India Meteorological Department (IMD) has stated that the surface temperature of Arabian Sea currently in the range of 30-31 degree Celsius, which is abnormally high.

What has changed in Arabian Sea since 2018?

The Arabian Sea started losing the tag of a ‘calmer sea’ in 2018 when it generated three cyclonic storms as against four in the Bay of Bengal. The next year i.e. 2019, Arabian Sea went past the Bay of Bengal by generating five cyclones to three. The India Meteorological Department (IMD) report of 2020 termed it as a rare event, which had last occurred in 1902.

In May-June 2020, Nisarga in the Arabian Sea and Amphan in the Bay of Bengal emerged as the most devastating cyclones. Nisarga was the strongest tropical cyclone to strike Maharashtra (west coast) since 1891. Before Nisarga, only two cyclones had struck Maharashtra in the month of June, in 1948 and 1980 respectively. Nisarga claimed 6 lives while more than 16 suffered injuries. The Maharashtra government put the total damage from the cyclone at Rs 650 crore and required Rs 1100 crore to recover from its impact.

Scientists say the increase in frequency of cyclones in the Arabian Sea can clearly be attributed to climate change. Roxy Mathew Koll, a scientist attached to the Indian Institute of Tropical Meteorology (IITM) in Pune told ‘Lounge’ that the rapidly intensifying cyclones is a direct result of increasing temperature in the Indian Ocean (Bay of Bengal and the Arabian Sea). “Heat is energy, and cyclones intensify rapidly by turning the potential energy stored in the ocean to kinetic energy,” he said.

Also read: Climate education for young minds is the need of the hour

In fact, Koll put up a social media post a few days before cyclone Tauktae was formed. It read: “Arabian Sea used to be cool, but now it’s a warm pool—supporting more intense cyclones. Tropical cyclones draw their energy from the warm waters—a reason why they form over the warm pool regions where temperatures are above 28°C.” 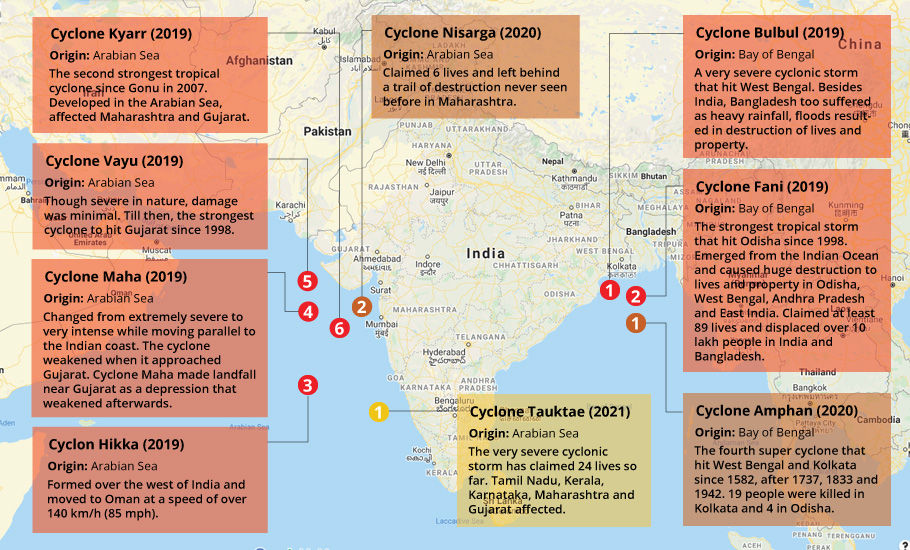 India Today quoted climate scientist Hiroyuki Murakami’s study to say that almost 65% of cyclones caused in the Arabian Sea were a direct result of climate change.

The Intergovernmental Panel on Climate Change (IPCC), a United Nations body, too has stated that the sea surface temperature of the Arabian Sea is rising consistently. A temperature in excess of 28 degrees Celsius in Arabian Sea and the Bay of Bengal can trigger cyclones.