A massive anti-CAA protest in Chennai late on Friday (February 14) took an abruptly violent turn with the police resorting to a lathi-charge to disperse protesters.

The protests, organised by Islamic groups, saw thousands of people pouring into Washermanpet.

Unconfirmed reports said a 70-year-old man, who was not connected to the protest, died in the ensuing melee. Another man, aged 45, was admitted to the hospital with injuries.

Protesters squatted on the road and shouted anti-CAA slogans. Many women and children too were part of the protest. The protest went on for more than five hours before the police arrived and asked them to disperse. The protesters had an argument with the police.

The police claimed that during the argument, the protesters threw stones at the force. They said they had to resort to a lathi-charge the crowd to bring the situation ‘under control.’

The police arrested more than a hundred protesters. As the videos of the lathi-charge went viral, more people turned up on the roads, blocking the main thoroughfare of Mount Road. Massive turn-ups were reported in Guindy, Ice House, and Greams Road too. 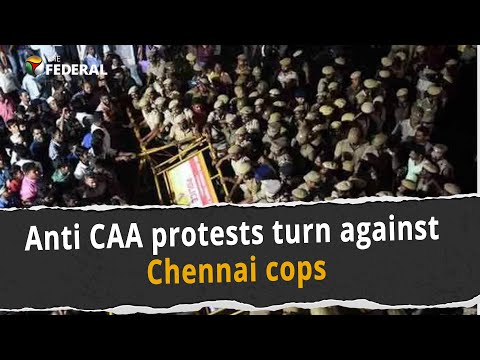 Eye-witnesses said the police used excessive force and the videos showed protesters being mercilessly thrashed by the police. Many people were reported in the police action, sources said. There were protests in other parts of the state too but all protests ended late in the night.

City Police Commissioner, AK Viswanathan, held discussions with community elders and representatives of Muslim organisations, following which all those detained were released, the police said.

“An amicable decision was arrived at in the meeting with Muslim organisations and they have announced that the agitation will be withdrawn,” a police officer said, adding that normalcy had returned to the area.