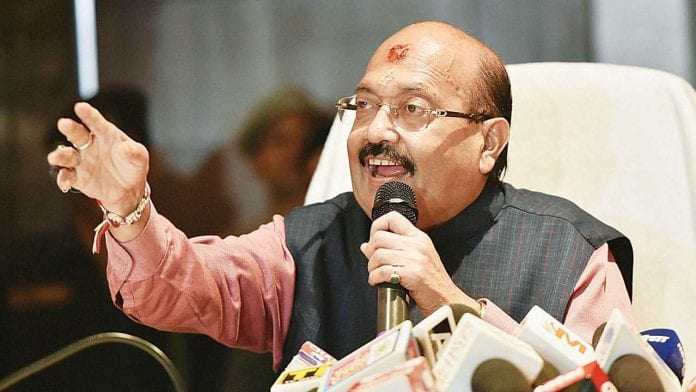 Rajya Sabha MP Amar Singh, who died in a Singapore hospital on Saturday (Aug 1) at the age of 64, skillfully navigated the intersection of politics and corporate world and then imbued it with a dash of filmy glamour as he struck a unique bond with socialist patriarch Mulayam Singh Yadav to imprint his stamp on the coalition-era politics.

Born in Azamgarh, he had a humble beginning as a young member of the Congress Chhatra Parishad in Kolkata, where his family ran business, and then become the face of Lutyens Delhi’s politics of political machinations, as he helped the UPA-1 government survive a no-confidence motion in the Lok Sabha in 2008 as the Samajwadi Party backed the Congress-led dispensation.

The Left parties had withdrawn support to the Manmohan Singh-led government over the Indo-US nuclear deal and it was with the support of the SP that it pulled through.
That Mulayam Singh Yadav was persuaded to forget his decade-long animosity towards the Congress, was credited to the wily Thakur from Uttar Pradesh. He is believed to have played a crucial role in swinging the Samajwadi Partys support in favour of the UPA in 2008 after the Left parties withdrew their support due to their opposition to the nuclear deal.

His connections in the industry brought generous corporate financing to SP, and he in turn became the virtual number-two in the party, much to the dismay of Yadav’s socialist acolytes of decades.

The annual Saifai Mahotsav, held in Yadavs birthplace, became a national news as film stars performed during the heydays of Samajwadi Party.

Amar Singh had undergone kidney transplant in 2011 and had been keeping unwell for a long time. Helping his family in their business in Kolkata’s Bara Bazaar, he came in contact with the Congress and became a young member of the Chhatra Parishad, the students wing of the party in West Bengal.

After being close to various Congress leaders, including Veer Bahadur Singh, Amar Singh came in contact with socialist leaders during Mandal politics. Yadav was then looking to make a foothold in the national politics. He found Singh, who willingly helped him navigate through the corridors of power. It was a turning point for Singh who used his relations to help Yadav and gain his confidence.

When the Samajwadi Party came to power in Uttar Pradesh in 2003, Singh organised various meets of the UP government with industrialists and film personalities who also invested in the state. It is said that Amar Singh had organised a visit of former US President Bill Clinton to Lucknow through the Clinton Foundation in 2005 when Mulayam Singh was the chief minister of the state.

There was a controversy over Singh allegedly donating a huge sum of money to the Clinton Foundation. But Singh had denied it.

Singh’s name later emerged in the alleged cash-for-votes scam liked to the 2008 vote on the no-confidence motion in Lok Sabha and he was arrested in 2011.
His media interactions organised mostly outside his Lodhi Estate official residence in the national capital would draw media persons in drove for his outspoken attacks on his rivals, which sometime included Mulayam Singh Yadav and the Bachchan family after he had a fallout with them.

Due to his proximity with the Bachchans, he had convinced Jaya Bachchan to represent the Samajwadi Party in Rajya Sabha. In February this year, Singh had apologised to Amitabh Bachchan for “overreaction” against the superstar.

In a tweet, Singh had said, “Today is my fathers death anniversary and I got a message for the same from SrBachchan ji. At this stage of life when I am fighting a battle of life and death I regret for my overreaction against Amitji and family. God bless them all.”

Amid pressure from SPs old guard and growing differences with Mulayam Singh, Amar Singh resigned from various party posts. He was later expelled from the party in 2010, ending his nearly two-decade long association with the SP leader. Singh had later mended his differences with Yadav. But the relationship was shaky and ended soon.

In 2011, Singh floated his Rashtriya Lok Manch and campaigned for party candidates in the 2012 Uttar Pradesh assembly elections. Actor Jaya Prada, who stood by Singh in his political battles, was one of the candidates. All his party candidates lost.

Rahat Indori: Rebel who reminded us India belongs to everyone