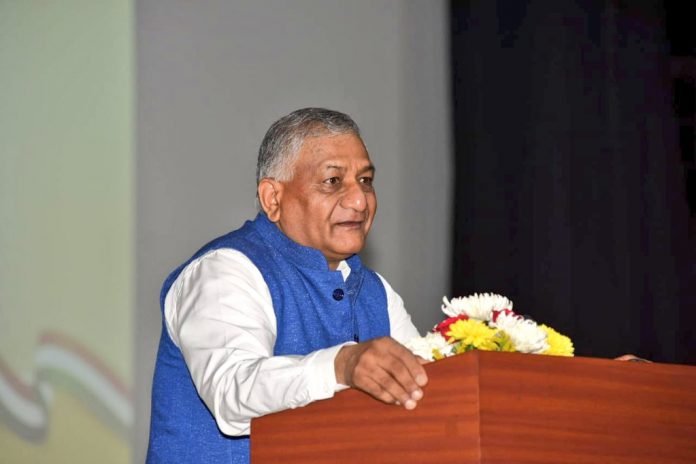 Unlike many BJP leaders who have toed the line on the withdrawal of the farm laws, Union minister VK Singh has a different take on the matter.

While announcing the decision to withdraw the three controversial laws, Prime Minister Narendra Modi had apologised to the nation and said that he was not interested in blaming anyone.

VK Singh however appeared critical of farmers and straightforward about it.

“Sometimes we understand things well but then we blindly follow the other person. I asked a farmer leader what is ‘kaala‘ or black about these laws that you call ‘kaala kanoon’. I said except the ink, what else is black in these laws? He said, ‘I agree but it’s still black’. What is the cure for this? There is no cure,” he said in an interview with mediapersons.

Singh went on to add that there is a fight for supremacy among farmer organisations. “For some reason they are not thinking about the benefit of the small farmer. That is why the PM has taken the laws back,” he said.

Also read: All the instances when Modi defended the farm laws

Most BJP leaders had gone with the party line that seemed to stress the U-turn as one in national interest in the wake of alleged attempts by secessionist forces to capitalise on the protest.

Modi’s announcement came on the birth anniversary of Guru Nanak.

“While apologising to the nation, I want to say with a sincere and pure heart that maybe something was lacking in our tapasya (dedication) that we could not explain the truth, as clear as the light of the diya, to some of our farmer brothers. But today is Prakash Parv, not the time to blame anyone. Today, I want to tell the country that we have decided to repeal the three farm laws,” he said in an address to the nation.