The politically and religiously sensitive Ayodhya hearing was the second-longest proceeding in the history of the Supreme Court which lasted for 40 days.

The decades-old high voltage Ram Janmabhoomi-Babri Masjid land dispute in Ayodhya involving 2.77 acres of land had commenced on August 6 and concluded on October 16, and the apex court pronounced the verdict on Saturday (November 9). 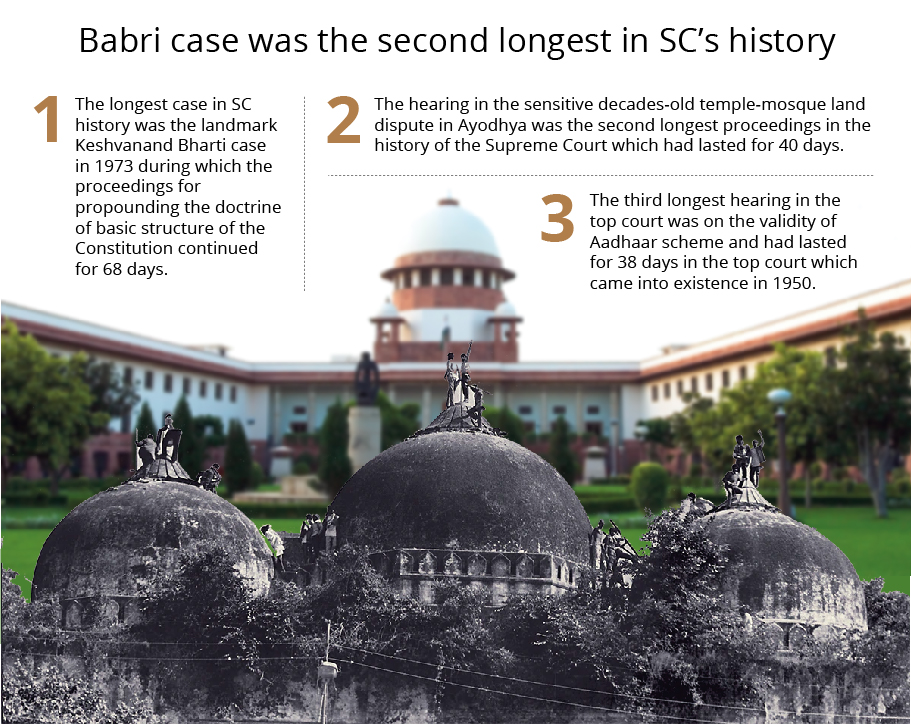 In a unanimous verdict, the apex court cleared the way for the construction of Ram Temple at the disputed site and directed the Centre to allot a 5-acre plot to the Sunni Waqf Board for building a mosque.

A five-judge bench headed by the Chief Justice of India Ranjan Gogoi put an end to the more than a century-old dispute that has torn the social fabric of the nation.

One of the most important and anticipated verdicts in India’s history, the arguments in the Ayodhya case were the second-longest after the landmark Keshvanand Bharti case in 1973 during which the proceedings for propounding the doctrine of the basic structure of the Constitution continued for 68 days.

On the concluding day of the marathon hearing, the bench had observed “enough is enough”. The day was marked by high drama when Rajeev Dhawan, a senior counsel for the Muslim parties, tore a pictorial map provided by Hindu Mahasabha purportedly showing the exact birthplace of Lord Ram in Ayodhya in Uttar Pradesh.

The bench, also comprising Justices S A Bobde, D Y Chandrachud, Ashok Bhushan and S A Nazeer, had come out with schedules for Ayodhya dispute hearing more than once and the arguments were first fixed to be concluded by October 18. That was later advanced to October 17, but on October 16, the bench decided to wrap it all up saying “enough is enough”.

The bench was racing against time since the verdict was to be delivered before Justice Gogoi demits office on November 17.

After wrapping up the hearing and reserving the verdict, it had granted three days to contesting parties to file written notes on moulding of relief or narrowing down the issues on which the court is required to adjudicate.

Also read: How the legal battle to acquire 2.77-acre Ayodhya land panned out over the years

The marathon hearing was marked by frequent heated exchanges between the lawyers of the Hindu and the Muslim sides, and midway the issue of settling the dispute through mediation once again cropped up.

The first mediation bid failed to find an amicable resolution leading to the commencement of day-to-day hearing from August 6.

Later, the panel, which comprised F M I Kallifulla, a former apex court judge, Sri Sri Ravi Shankar, founder of Art of Living Foundation and Sriram Panchu, an acclaimed mediator, was allowed to continue mediation proceedings. The panel submitted its report to the court on the last date of hearing.

Sources had said that the report was like a “sort of a settlement” between the Hindu and the Muslim parties.

They had said the Sunni Waqf Board, Nirvani Akhada, Nirmohi Akhada, Ram Janmabhoomi Punruddhar Samiti and some other Hindu parties were in favour of settling the contentious land dispute.