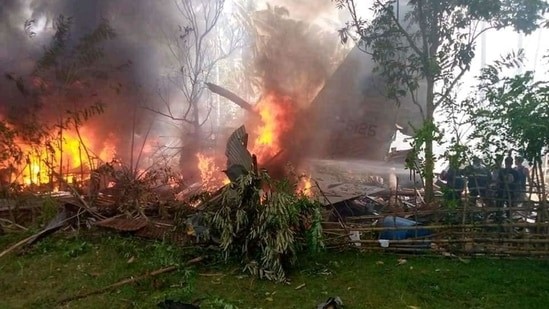 At least 17 people have been killed and 40 rescued when the Philippine air force C-130 aircraft carrying troops in a southern province crashed on Sunday. (Pic via Pondohan TV / Facebook)

At least 17 people have been killed and 40 rescued when the Philippine air force C-130 aircraft carrying troops in a southern province crashed on Sunday (June 4). The plane was in fact transporting troops from southern Cagayan de Oro city, said media reports.

The head of the Philippine armed forces, Gen. Cirilito Sobejana, said the plane missed a runway while trying to land. He said it crashed near a village called Bangkal in the town of Patikul, a stronghold of the Muslim militant group known as Abu Sayyaf. He said 40 people had been rescued, according to a New York Times report.

Meanwhile PTI reported that Defence Secretary Delfin Lorenzana said rescue efforts are ongoing. He said the aircraft had 92 people on board, including three pilots and five crew. The rest were army personnel.

It was not immediately clear what had caused the crash. It has been raining in the central Philippines but whether the weather in the Sulu region has caused the crash is not ascertained as yet.

Government forces have been battling Abu Sayyaf militants in the predominantly Muslim province of Sulu for decades .The airport in Sulu’s main town of Jolo is located a few kilometers from a mountainous area where troops have battled the Abu Sayyaf. Some militants have aligned themselves with the Islamic State group.

The United States and the Philippines have separately blacklisted the Abu Sayyaf as a terrorist organisation for bombings, ransom kidnappings and beheadings. It has been considerably weakened by years of government offensives but it remains a threat.

New York Times report pointed out that in addition to the soldiers, the plane, a C-130 Hercules, was carrying five military vehicles. The C-130 is an American-built turboprop that is commonly used by militaries around the world and is sometimes kept in service for decades.

The Philippine military has been trying to modernize its aging fleet. Earlier this month, a newly acquired Black Hawk helicopter crashed during a night training flight, killing six people onboard.