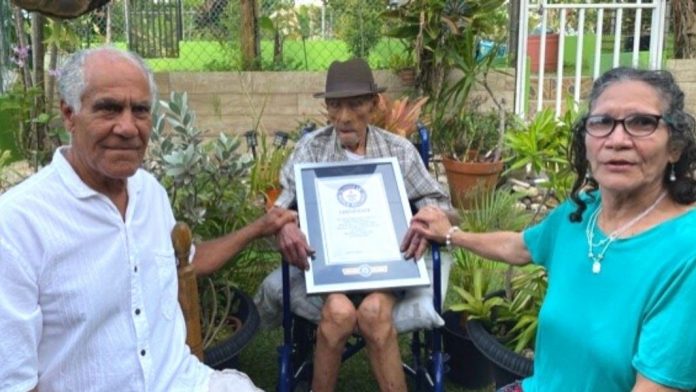 The centenarian’s recipe for longevity is as simple as it is profound. “My dad raised me with love, and taught me to love everyone. He always told me and my brothers and sisters to do good, to share everything with others. Besides, Christ lives in me,” he was quoted as saying by the Guinness Records website.

To live happily, one needs to have an abundance of love, and live life without anger, he added.

Born on August 8, 1908, in Carolina, Puerto Rico, Márquez is the oldest of 11 children born to Alberto Flores Melendez and Margarita Márquez-Garcia, the website further said.

“It’s always an honour to celebrate these remarkable human beings, and this year we’ve processed applications from not one but two contenders for the title of oldest living man,” said Craig Glenday, Editor-in-Chief at Guinness World Records. “I am thrilled to feature Sr. Márquez — born, interestingly, on the 8th day of the 8th month in the 8th year of the 20th century — and bring his fascinating story to the wider public.”

“But alongside this, I am also pleased that we got the chance to pay our respects to Dumitru Comănescu, who briefly held the record but sadly passed before we went to press,” Glenday added.

Márquez’s childhood was one filled with physical activity. From when he was small, he helped his father on the family’s sugarcane farm, where he handled the watering and loading of sugarcane onto wagons for transport.  Being the eldest also meant carrying out household chores and caring for his nine surviving siblings.

Also read: Is China socialist or capitalist? Neither. It is ‘Chinist’

Farming turned out to be Márquez’s vocation, too, as he took it up to support his family. He was married to Andrea Perez for 75 years, till she passed away in 2010. They had four children, of which two — Tirsa and Millito — are still alive. Tirsa and Millito take care of Márquez now. His family has expanded to five grandchildren and five great-grandchildren.

Around 2010, when Márquez was 101, he underwent surgery to implant a pacemaker, said the Guinness website. At present, he enjoys good health, though his hearing is almost fully gone.

“He received his official Guinness World Records title certificate in his home, where he commemorated the life-long achievement with celebratory photos,” said Guinness.

Earlier, Guinness World Records had recognised Romania’s Dumitru Comănescu, born on November 21, 1908, as the oldest living male in the world. However, he held the record for less than a month, as he passed away on June 27, 2020, aged 111 years 219 days.

According to Guinness, the oldest person ever to have lived is Jeanne Calment of France, who lived to be 122 years and 164 days.

Kane Tanaka of Japan, who was born on January 2, 1903, holds the current record for being the world’s oldest living person. The 118-year-old lives in Fukuoka, Japan.