Thousands of men and women lined up outside NRG Stadium in Houston on Sunday (September 22) to protest against Indian prime minister Narendra Modi’s “Howdy Modi” event. While media largely focused on the main event, the protests went largely unreported.

The protestors, largely Muslims, Sikhs, Christians, Jews and Dalits were raising slogans against Modi for alleged religious and human rights violations in India. The protesters included a Hindu Human Rights group. A handful of white supremacists too lined up at the venue imagining a ‘perfect world with Trump, Putin and Modi.’

The protesters were braving hot sun and were raising slogans in contrast to 50,000 supporters who had gathered enthusiastically inside well laid out stadium making it largest ever rally celebrating the Indian diaspora. 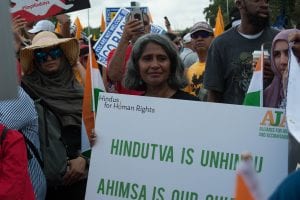 Mohammed Nasrullah, founder member of the International Humanitarian Foundation and interim president of Amnesty International, used the Jacob’s method to claim that at least 15,000 protesters participated. This, however, could not be verified independently. The presence of President Donald Trump meant that no aerial shots of the protests were allowed. The protestors stretched about a mile long, in the empty parking lot just outside the venue.

The massive rally was covered live throughout the world. Modi did mention during his address that a large number of people would be watching the event as it unfolded. In contrast the crowd that gathered outside was largely ignored by the visiting Indian media as the protesters included secessionist Khalistani and Kashmiri groups.

The Alliance for Justice and Accountability (AJA), an umbrella organisation of progressive groups across United States, was one of the major organisers of the protest. The group had earlier called boycott of World Hindu Congress in Chicago.

Indian Muslims, present at the venue had put up Indian and US flags, and wearing black T-shirts, mentioning everything from lynching, to crimes against women, besides the alleged human rights violations in Kashmir. 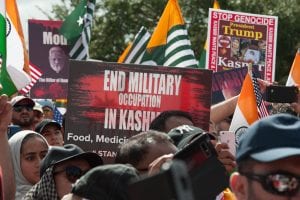 Syed Ali, vice president of the Indian American Muslim Council, stated that as Indian Muslims, we wanted to make clear that as Indians, we love our country and that we are only disturbed by the growing influence of the Hindutva ideology in the country which is leading to hate crimes against minorities.

As soon as it was announced that US President Donald Trump will be part of the jamboree, American civil rights activists, human rights activists, members of local progressive churches and several Democrats too joined the protest.

Reverend Lisa Hunt, Rector at the St. Stevens Episcopal Church, said in Modi’s India, minorities and Dalits are experiencing lynching and hate crimes. Despite the mention of secularism in the Indian constitution, Modi and BJP are creating an atmosphere of hostility for religious minorities, she said.

A lone Hindu voice was that of Hindus for Human Rights (HfHR). Its co-founder Sunita Viswanath said her organisation had joined the protest because Hindus cannot accept human rights violations in the name of Hinduism. She was carrying a placard saying, “Hindutva is unHindu, Ahimsa is our culture.”

Meanwhile, inside the venue the 20 odd US Congressmen and women who were part of the event focused on the greatness of past leaders such as Gandhi, Nehru and Martin Luther King. Maryland Congressman and House leader Steny Hoyer, went on about how you reap what you sow, indicating in several ways, how democracy is at threat.

The protesters had gone ahead with their agitation despite condemnation back home with allegations that their efforts were not only demeaning the Indian Prime Minister but the home country as well.

The International American Muslim Council (IAMC), which is a key group of the AJA and Council for American Islamic Relations (CAIR) have been engaging with their local Congressmen and women, which is believed to be the reason behind Indian American Congressmen and women like Democrat Ro Khanna and Democrat Pramila Jayapal staying away from the event, though it meant risking a lot of Indian support in the upcoming elections.

The Bohra Muslim community, part of the Indian Muslims Association of Greater Houston (IMAGH), chose to work with Modi, rather than against him. Though their support for the event has been widely reported in India, to show that the American Muslims actually support the event, Latafath Hussain, the founding member of IMAGH said, “Our concern is not with what is happening in India at all. Our only concern is to work for the interests of the community locally in Houston,” he said.

These protesters, who had been planning for months, to raise the various issues of concern in India, grew exponentially after the lockdown in Kashmir, with several Kashmiris and Kashmir sympathisers joining in. The number swelled further since Trump gave his nod for the event. 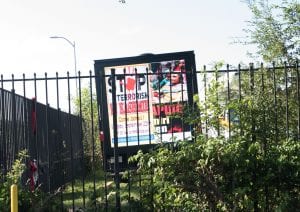 The protesters have been campaigning actively to get as many Congressmen involved in criticising the Modi event as possible. Democrat Congressman Ro Khanna, recently got the Hindu right wing groups riled up, when he stated at a recent town hall meeting that “at this moment in our world, we desperately need political leaders to stand for pluralism, for tolerance, for respecting people of all faiths, and for human rights.”

Senator Bernie Sanders statement that “the communications blockade must be lifted immediately, and the United States government must speak out boldly in support of international humanitarian law and in support of a UN-backed peaceful resolution that respects the will of the Kashmiri people,” did not go well with these right wing groups either, who immediately started a social media campaign to boycott democrat Sanders in the upcoming elections.

Another Democrat Congresswoman Jan Schakowsky, too released a video statement condemning the abrogation of Article 370 and the subsequent lockdown, demanding that US and UN to speak up against the “atrocities’ in the region.

The biggest shocker, however, came when the darling of the Hindu right wingers here, Democrat Congresswoman Tulsi Gabbard, an ardent supporter of Modi and funded heavily by the HSS, withdrew participation from the event.

At the press conference organised by AJA, just before the event, to announce details of the protest it was pointed out how local politicians like mayor Sylvester Turner, who is up for re-election in November, is attending the meeting only because they stand to benefit from the presence of the huge India diaspora in Houston. 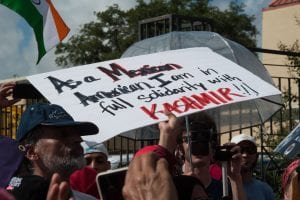 Governor Brad Sherman had released a letter asking Congressmen to attend the event in August, but had withdrawn, following cries of protest. Republican Pete Olsen, however wrote in the Houston Chronicle, how important the event is, while confirming his presence.

Journalists critical of Modi were been kept out of the event. The press participation though invited by the Indian Embassy, was replied to by the organisers who either rejected or accepted the request depending on one’s political leanings.

The editor of The India Observer, Adam Rizvi, was told that there were too many requests for media participation which made them turn down a few. In the application, the journalist had to share all the social media handles for the vetting process. Adam Rizvi, who is residing in the US for long, and who enjoys good connections with Indian Embassy, recalls how “after 2014, the engagements arranged by the India Embassy to meet Indian politicians, has dropped drastically, and we are no longer invited for an interaction with Modi. It was however a regular affair when even Atal Bihari Vajpayee was the prime minister,” he said.

(Vijayalakshmi Nadar is a Houston-based journalist)