Gotabaya Rajapaksa — who is nicknamed “The Terminator” and is Sri Lanka’s main opposition candidate — won the 2019 presidential elections by securing massive support from the Sinhalese-dominated constituencies.

Conceding defeat, Sri Lanka’s ruling party candidate Sajith Premadasa said, “It is my privilege to honour the decision of the people and congratulate Gotabaya Rajapaksa on his election as the seventh President of Sri Lanka.”

“We got between 53 to 54%. We are very happy that Gota will be the next president,” said Rajapaksa’s spokesman Keheliya Rambukwella. He added that Rajapaksa will be sworn in as President on Monday or Tuesday.

Also read: Lanka polls to decide who is winner – India or China?

Congratulations @GotabayaR on your victory in the Presidential elections.

I look forward to working closely with you for deepening the close and fraternal ties between our two countries and citizens, and for peace, prosperity as well as security in our region.

I also congratulate the people of Sri Lanka for the successful conduct of the elections.

Rajapaksa’s opponent and ruling party candidate Sajith Premadasa secured a vote percentage of 45.3%. “While New Democratic Front Presidential candidate Premadasa (52), secured the highest votes in the Tamil-dominated Northern region and parts of the East, Rajapaksa led in most areas in the Sinhalese-dominated South,” the Columbo Gazette reported.

The remaining candidates who contested the elections were far behind in numbers. Sri Lankans voted on Saturday (November 17) to choose a successor to President Maithripala Sirisena amid multiple poll-related incidents, including an attack on the minority Muslim voters, in an election that will decide the future of the country that struggles with security challenges after the Easter Sunday bombings and increasing political polarisation.

As many as 12,845 polling stations were set up across the country for 15.9 million voters. A record of 35 candidates were in the fray for the top post with the main contenders being former wartime defence secretary Rajapaksa and the ruling party candidate Premadasa.

Anura Kumara Dissanayake from the National People’s Power (NPP) coalition was seen as a strong candidate too.

This poll will make a record as the elections with the largest number of polling stations and the longest 26-inch ballot paper.

According to observers, with pro-China Rajapaksa in the fray, India is keeping a close watch on the election results as its outcome will have a bearing on the country’s presence in the Indian Ocean region where Beijing is increasingly making its inroads.

China, which has acquired Sri Lanka’s Hambantota port in 2017 as a debt swap, has been ramping up its ties with the island nation and expanded its naval presence in the Indian Ocean with an established logistics base in Djibouti.

China in July gifted a warship to Sri Lanka, in a growing sign of its deepening military cooperation with the strategically located island nation in the Indian Ocean. 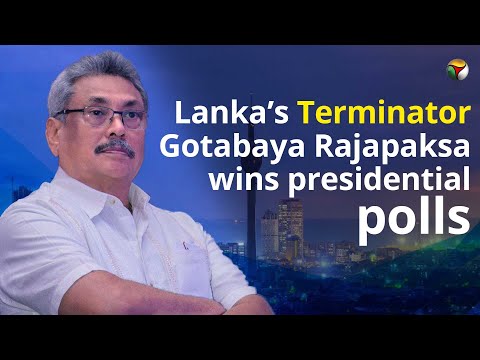 The candidate who obtains over 50% of the votes will win the presidency. The ballot also allows voters to choose their three top candidates in order of preference, which will determine the winner if no candidate secures over half of the first-place votes.

Those preferences will be used to tally votes for the top two candidates to decide the winner. Such a process has not happened in previous elections because one candidate has always crossed the 50% mark.

In the election, Premadasa, the ruling United National Party (UNP) candidate, is said to be banking on his ‘Man of the Commoner’ image – a legacy of his father Ranasinghe Premadasa, the country’s president between 1989 and 1993 until the LTTE assassinated him in 1993. Premadasa senior was considered as the “man of the poor”.

Rajapaksa senior’s legacy of ending the Tamil separatist war has made him the darling of the Sinhala Buddhist majority. His younger brother Gotabhaya was his top defence ministry official who supervised the military operations against the LTTE. While doing so, he acquired the reputation of a ruthlessly efficient administrator, but was also accused of violating human rights, a charge he vehemently denied.

Rajapaksa had also been accused of overseeing torturing and indiscriminate killings of both civilians and combatants, and later of political assassinations. He and his brother Mahinda are also accused of condoning sexual violence and extrajudicial killings allegedly by Lankan security forces during the war.

Muslims fear that his popularity among Sinhalese Buddhists will further deepen the divide between the two communities post the Easter Sunday attacks carried out by Islamist extremists that claimed 269 lives, since Rajapaksa had promised during his campaigns that he would crush the religious extremism in Sri Lanka if elected.

He had also said that he would not honour the country’s commitments to the UN Human Rights Council on post-war accountability and reconciliation if he comes to power. “We will always work with the United Nations, but I can’t recognise what they (UN) have signed with (the) past governments,” he said.