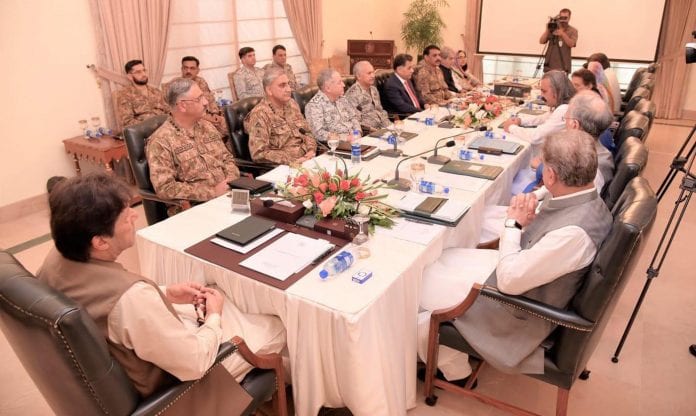 Pakistan on Sunday warned India that it is ready to respond to any “misadventure or aggression” by the Indian forces, as the country’s top civil and military leadership discussed the sudden spike in tensions with New Delhi during a meeting of the National Security Committee.

A statement issued by the PM’s Office after the meeting said that Pakistan is “ready to defend itself against any Indian misadventure or aggression” and will continue to provide all-out “diplomatic, moral and political support” to the people of Kashmir.

The meeting criticised “Indian actions which would have adverse implications for regional and international peace.”

Pakistan reiterates that Kashmir is a long-standing unresolved international dispute which needs peaceful resolution. Pakistan therefore urges India to come forth to resolve the issue in accordance with the aspirations of the Kashmiri people, it said.

It said that the recent “build-up of forces” is adding “fuel to fire”. “The forum strongly condemned such Indian strategy at this time when Pakistan and the international community are focused on resolving the Afghan conflict,” the statement said.

The recent Indian measures will increase the levels of violence and turn this area into a flashpoint and a destabilising factor in the midst of two strategically capable neighbouring countries, it said.

Prime Minister Khan said that India is totally disregarding international obligations and the country’s “arrogance will only result in heightening the conflict dynamics in the region.” Khan invited the attention of world leaders and international bodies towards “irresponsible, unilateral and irrational behaviour” of Indian leadership.

The Prime Minister concluded the meeting by reaffirming Pakistan’s resolve to respond to any Indian misadventure or aggression with the full support of the nation.

Earlier, in a series of tweets, Khan said that its time for US President Donald Trump to mediate on the Kashmir issue.

“President Trump offered to mediate on Kashmir. This is the time to do so as situation deteriorates there and along the LOC with new aggressive actions being taken” by Indian forces, he said, adding that this has the “potential to blow up into a regional crisis”.

Last month, Trump had made a stunning claim that Prime Minister Narendra Modi asked him to mediate on the vexed issue during their meeting in Japan, evoking a sharp reaction from India which denied Modi making any such request.

In another tweet, Khan said the people of Kashmir “must be allowed to exercise their right to self-determination according to UN SC resolutions.” “The only road to peace & security in South Asia runs through a peaceful & just settlement of Kashmir,” he tweeted. His government also sought the support of the Opposition on tension with India.

Will quit if Centre brings law saying only one member of family in p...

Reopening of schools a relief in rural areas, feel teachers in Mahar...