Sri Lanka will work with India and it won’t do anything that will harm its interests, newly elected President Gotabaya Rajapaksa said ahead of his visit to New Delhi later this week. Rajapaksa, who is considered pro-China, said he wanted Sri Lanka to be a “neutral country” and work with all the countries.

“We will work with India as a friendly country and won’t do anything that will harm India’s interests,” said Rajapaksa, who will travel to New Delhi on November 29 on his first official trip abroad as Sri Lankan President. “We want to be a neutral country,”  Rajapaksa, who was sworn in as Sri Lanka’s president last week, told Nitin Gokhale of BharatShakti.in and Strategic News International in an interview.

“We don’t want to get in between the power struggles of superpowers… We are so small and we cant survive to get into this balancing acts,” he said. Rajapaksa said he wanted to work very closely with both India and China.

“We want to work with all the countries and we don’t want to do anything which will harm any other country for that matter, we understand the importance of Indian concerns, so we cant engage in any activity which will threaten the security of India,” he added.

Noting that the Indian Ocean is an important place and plays an important role in the present day geopolitics, he said Sri Lankan was placed in a very strategic location and all the sea lanes are passing close to the country from east to west. “So, these lanes should be free and no country should control these sea lanes,” he said.

Asserting that Sri Lanka’s involvement with China during the presidency of his elder brother Mahinda (from 2005-2015) was “purely commercial”, he said, “I invite India, Singapore, Japan and Australia to come and invest here. Don’t allow only China to invest.” He also vowed to create an investment friendly environment in Sri Lanka.

Rajapaksa said that giving away the Hambantota port to China on a 99-year lease was a mistake by the previous government headed by President Maithripala Sirisena. “The deal has to be renegotiated,” he said. “Giving a small loan for investment is a different thing but giving a strategic important economic harbour is not acceptable. That we should have controlled.”

China, which acquired Sri Lanka’s Hambantota port in 2017 as a debt swap, has been ramping up its ties with the island nation and expanded its naval presence in the Indian Ocean with an established logistics base in Djibouti. “We want investments to help us but we will not do anything to get involved in military and geo-political rivalry,” Rajapaksa said.

On allegations of him being “authoritarian” and “racist”, the president said, “Its a wrong perception created during the civil war with the LTTE.” “I am a disciplined person but that doesnt mean I am racist,” he added. 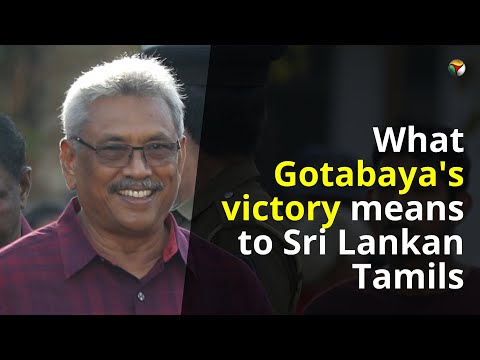 However, the brother-duo were accused of condoning sexual violence and extrajudicial killings allegedly by Lankan security forces during the civil war, which ended in May 2009 with the death of LTTE supremo Velupillai Prabhakaran.