Veteran actor and Hollywoods Golden Era icon Kirk Douglas, known to fans world over for his films such as “Spartacus”, “20,000 Leagues Under the Sea”, “The Bad and the Beautiful” and “Champion”, has passed away at the age of 103, his family has announced.

The actor died of natural causes on Wednesday. His son, actor Micheal Douglas shared the news of his fathers death on social media.

“It is with tremendous sadness that my brothers and I announce that Kirk Douglas left us today at the age of 103. To the world, he was a legend, an actor from the golden age of movies who lived well into his golden years, a humanitarian whose commitment to justice and the causes he believed in setting a standard for all of us to aspire to.

“But to me and my brothers Joel and Peter he was simply Dad, to Catherine, a wonderful father-in-law, to his grandchildren and great-grandchild their loving grandfather, and to his wife Anne, a wonderful husband,” he wrote alongside pictures of Kirk Douglas through the ages.

Michael Douglas said his father leaves a rich cinema legacy behind but he will also be remembered for his contribution to public service.

“Kirks life was well lived, and he leaves a legacy in films that will endure for generations to come, and a history as a renowned philanthropist who worked to aid the public and bring peace to the planet.

“Let me end with the words I told him on his last birthday and which will always remain true. Dad – I love you so much and I am so proud to be your son,” he wrote.

“To my darling Kirk, I shall love you for the rest of my life. I miss you already. Sleep tight…” she wrote.

Filmmaker Steven Spielberg, who presented Kirk Douglas with an honorary Oscar at the 1996 Academy Awards, remembered the actor who retained his movie star charisma right till the end.

Born as Issur Danielovitch Demsky in Amsterdam, Kirk Douglas was one of the seven children of his parents – Jewish immigrants from Russia. When he came of age, he went to work to support his family.

According to The Hollywood Reporter, Kirk Douglas put himself through New Yorks St Lawrence University by working as a janitor. After receiving his bachelor of arts degree, he moved to Manhattan where he received a special scholarship for the American Academy of Dramatic Arts. 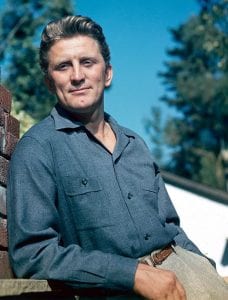 He made his Broadway debut as a singing messenger boy in “Spring Again”, starring Grace George and C Aubrey Smith, soon after graduating in 1941. Next year, he legally changed his name to Kirk Douglas before enlisting in the US Navy during World War II.

He attended the Midshipman School at Notre Dame and was commissioned an ensign.

He served on anti-submarine patrol in the Pacific as a communications officer until 1944, when he was honourably discharged as a lieutenant. Post-war, he returned to civilian life and Broadway, replacing Richard Widmark as the juvenile lead in “Kiss and Tell” and appeared in “Trio and Star in the Window”.

His performance in “The Wind Is Ninety” brought him to Hollywood’s attention.

What followed was his Hollywood debut in 1946 with the film “The Strange Love of Martha Ivers” with Barbara Stanwyck, which led to leading man roles in the 1950s-60s. He starred as a ruthless boxer in “Champion” (1949), a hated ambitious movie producer in “The Bad and the Beautiful” (1952) and iconic painter Vincent van Gogh in “Lust for Life” (1956).

He also launched his banner, Bryna Productions, in 1955.

He is billed as the first actor to take control of his career through a production house in the post-War era, challenging the stronghold of Hollywood studios.

But his most memorable role is off the screen. He was the first major star to defy the McCarthy Era establishment by producing and starring as a slave in “Spartacus”, written by blacklisted Hollywood screenwriter Dalton Trumbo.

The movie, in a way, is considered a reflection of who he was as a person. He also banked on a then young Stanley Kubrick with “Spartacus”.

A decorated artiste, the actor won many honours including the highest award that can be given to a US civilian, the Presidential Medal of Freedom.

He received the Cecil B DeMille Award at the 1968 Golden Globes.

Nominated three times for the best actor Oscar, Kirk Douglas received the Honorary Award for 50 years as a creative and moral force in the film community in 1996.

Despite suffering a stroke in 1996, Douglas continued to be active.

He made his final screen appearance in 2004 playing an ailing film director in the low budget drama “Illusion”. In 2009, he starred in an autobiographical one-man show, “Before I Forget”, at the Center Theater Groups Kirk Douglas Theatre in Culver City.

An author of 11 books, Kirk Douglas wrote his first, an autobiography “The Ragman’s Son” in 1988 and his last “Kirk and Anne: Letters of Love, Laughter, and a Lifetime in Hollywood”, was published in 2017.

Kirk Douglas is survived by sons Michael and Joel from his first marriage with actor Diane Dill, and Peter and Eric from philanthropist Anne Buydens.