A majority of Asian Americans in the US have said violence against them is increasing, and they also worry about being threatened or attacked, with a third admitting they have changed their daily routine because of these concerns, according to a survey.

According to the 2019 census data, there are 22.9 million Asian alone-or-in-combination residents in the US. Of these, at 5.2 million, the Chinese (except Taiwanese) population was the largest Asian group, followed by Asian Indian (4.6 million), Filipino (4.2 million), Vietnamese (2.2 million), Korean (1.9 million) and Japanese (1.5 million).

A majority of those who perceived rising violence against Asian Americans attributed it to former President Donald Trump, racism, COVID-19 and its impact on the nation, and scapegoating and blaming Asian people for the pandemic, the survey said.

Pew Research Center said it conducted the survey to understand the extent of discrimination experienced by Asian Americans and other groups, as well as their perceptions of violence against Asian people.

For this analysis, it surveyed 10,156 US adults, including 365 Asian adults, from April 11 to 17, 2022, using Pew Research Center’s American Trends Panel (ATP), an online survey panel that is recruited through national, random sampling of residential addresses.

The survey was conducted about a year after the fatal shooting of eight people, including six women of Asian descent, in the Atlanta area. The survey sample primarily included English-speaking Asian adults and, therefore, may not be representative of the overall Asian population (75% of our weighted Asian sample was born in another country, compared with 77% of the Asian adult population in the US overall), the research center said. 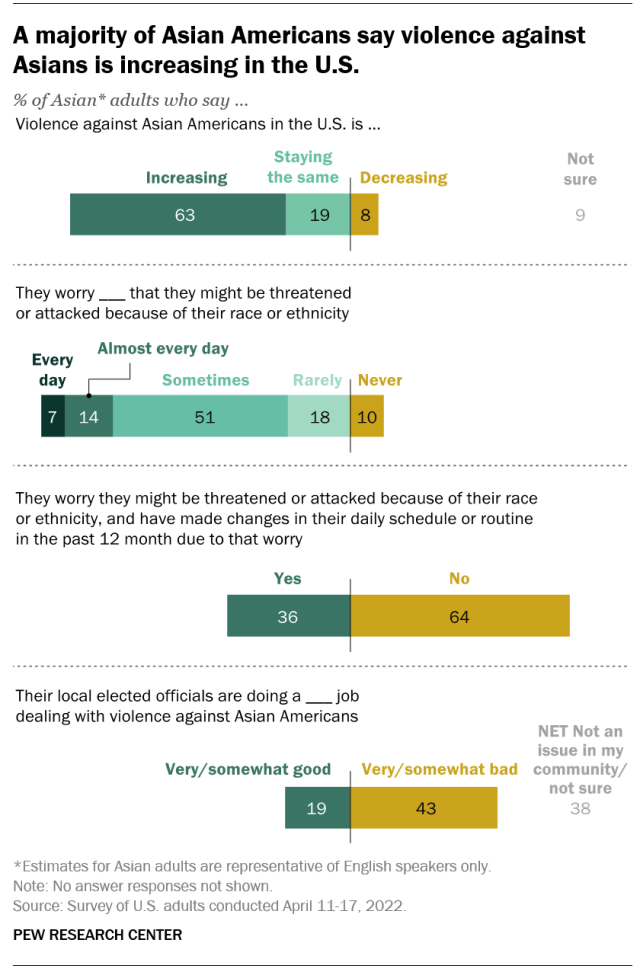 In the survey, about one in five Asian Americans said they worry daily (7%) or almost daily (14%) that they might be threatened or attacked because of their race or ethnicity, while 51% felt they worry sometimes, 18% rarely worry and 10% say they never worry.

Among those who worry rarely or more often, about a third of Asian adults (36%) say they have altered their daily schedule or routine in the past 12 months due to worries that they might be threatened or attacked.

When asked to select among measures that might help prevent violence against Asian Americans, about half of Asian American adults (48%) say making laws against hate crimes stronger would be the most effective policy. Smaller shares of Asian Americans say the same about creating community watch programs (16%), increasing local police presence (14%) and electing more Asian Americans to public office (13%).

Meanwhile, a report in March by Stop AAPI Hate, the coalition that tracks and responds to incidents of hate, violence, harassment, discrimination, shunning, and child bullying against Asian Americans and Pacific Islanders in the US, said, “From March 19, 2020 to December 31, 2021, a total of 10,905 hate incidents against Asian American and Pacific Islander (AAPI) persons were reported to Stop AAPI Hate. Of the hate incidents reflected in this report, 4,632 occurred in 2020 (42.5%) and 6,273 occurred in 2021 (57.5%).”