Working in an IT company in a village can be true 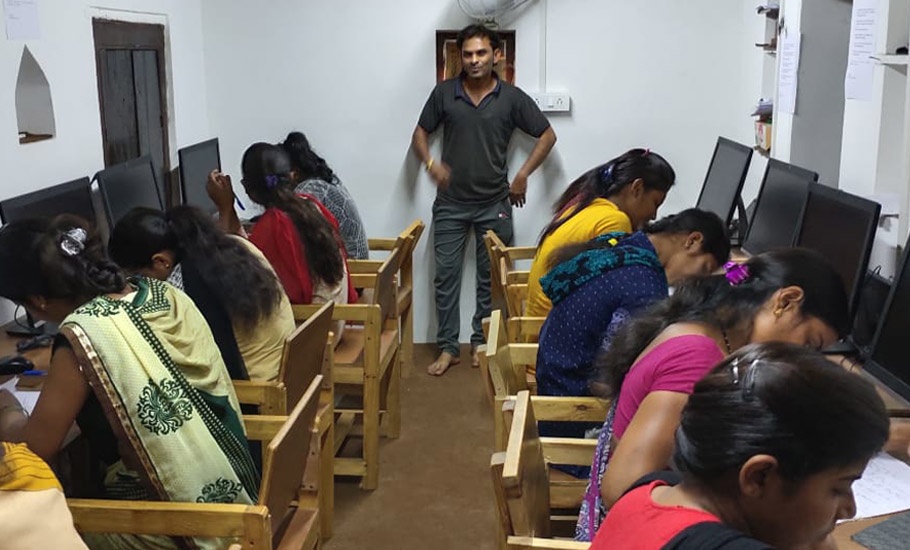 Candidates aspiring to join an IT firm in Paradsinga village take a written test.

Ankush Bavane, 28, is in a hurry. The IT firm employee is working on digitisation of roofs from aerial imageries for a US-based client who is demanding quality but is patient with deadlines. Ankush though wants to complete the task today itself, as he is committed to harvest his cotton crop in the next two days.

Well, if you are wondering if Ankush is going to rush back to his village from a city, you got it wrong. Because his IT company is situated in a small village called Paradsinga in Madhya Pradesh’s Chhindwara district, close to Maharashtra’s Nagpur.

Thanks to the IT firm Geomitra Solutions LLP (US partner company, rooforders.com) in his village, Ankush and nine others like him work in the multinational company as well as their farms seamlessly.

Set up by Prajakta and her husband Atul, Geomitra Solutions, which has an office in Nagpur, dared to think beyond the cities and hired and trained staff from the village itself, even when there are thousands of urban job seekers.

“We had known Shweta and Tanmay (of Gram Art Project) and their efforts to reignite the village economy in Paradsinga. In 2018, when Shweta told me that young graduates from the village want jobs, we asked her to send them to us. So one fine day, 10 of them hired a vehicle and drove all the way to our office,” says Prajakta.

All of them were plain graduates and most of them had no idea how to even switch on a computer, forget about using it. Prajakta and Atul realised the gravity of the problem. They had to be trained and prepared to work as professionals as they were not job-ready.

“We told them that they will get hands-on training and jobs as well, but on a condition that they will stay back in their hometown. We took the bold step to open a remote centre of our IT office in Paradsinga. To my surprise, they agreed instantly,” recalls Prajakta.

The couple had their apprehensions though. There are primarily two types of migration: forced and aspirational. “Forced migration is dictated by circumstances, but aspirations and the attraction of city life too can drive people out of their villages. In this case, the youths were more than happy to stay back. Moreover, we gave them the freedom to work as per their convenience, accommodating their farm work in the daily routine,” Prajakta said.

Shweta Bhattad and Tanmay Joshi, a couple working towards bringing self-sufficiency in Paradsinga village, were more than willing to help. It was in Shweta’s house in the village that they set up the office. They cleaned up one of the rooms, got computers and, after two months of intensive training at Nagpur, a staff of 10 people (5 men and 5 women) were ready for, what Ankush Bavane calls, their “dream job”.

“We have a very clear employee-employer relationship with the team, which has been working remotely and very efficiently since 2018. Most importantly, we have not lost a single employee so far. One woman quit briefly to get married, but joined again as she started working remotely from her new house,” says Prajakta.

Several government and media reports have time and again highlighted how India’s rural economy was under stress due to overdependence of a huge population on farm income — which is decreasing consistently.

As a result, villagers are forced, and also encouraged by the government, to migrate to cities. Here they have to contend with menial jobs, and are often forced to live in utter poverty without basic amenities. They get cereals and pulses at subsidised rates through the Public Distribution System (PDS), but the irony is that they have become net consumers now, dependent on government largesse to survive. Back in the village, they were the net producers — kings of their farmlands.

This mass exodus from scattered villages to highly concentrated cities has created a major urban problem – whether it is scarcity of water and space; traffic congestion; rising crime or sickening consumerism.

Ankush, who is a graduate and has now done a diploma in computers, says, “I could only dream of getting such a job, that too in my own village. I look after my one acre farm and also support my old parents. Besides, my job gives me dignity.”

Atul-Prajakta have since been meeting big corporates and companies, trying hard to convince them to move some of their work to small towns and villages, but with no success so far.

“On our own, we are ready to expand to different villages, provided we get stable electricity and internet connections,” says Prajakta.

On why other companies have failed to emulate their example, Prajakta says some of them have a conventional thinking of the need to have “employees in front of your eyes”, which is acting as a roadblock. “Corporates need to trust their own ability to trust these simple village folks. At least give it a try, once.”