One in every nine people in the world do not have enough to eat. About 82 crore people across the world suffered from hunger last year, according to The State of Food Security and Nutrition in the World report released by the United Nations on Monday (July 16).

Around 19 crore or 23 per cent of the undernourished people across the globe are in India, according to Food and Agricultural Organisation (FAO) 2018 estimates.

India is facing a major malnutrition crisis as it accounts for one-third of the world’s stunted children. About 38.4 per cent (or 4.66 crore) of children aged under five in the country are stunted — too short for their age, while 21 per cent of children in India are suffering from wasting, meaning their weight is too low for their height. About 60 per cent of these stunted children live in six states — Uttar Pradesh, Madhya Pradesh, Bihar, Rajasthan, Maharashtra and Tamil Nadu.

Globally, the number of people suffering from hunger has gone up for the third consecutive year from 81.1 crore in 2017. Over two years, nearly one crore more people across the globe did not have regular access to nutritious and sufficient food, indicating that hunger is returning to levels from a decade ago.

After a decades-long decline in the prevalence of undernourishment, malnutrition began to increase in 2015 due to poor harvesting practices, food wastage and wars. According to the UN, wars have had a negative impact on the availability of food and have led to a destruction of the environment, which is critical to grow food. 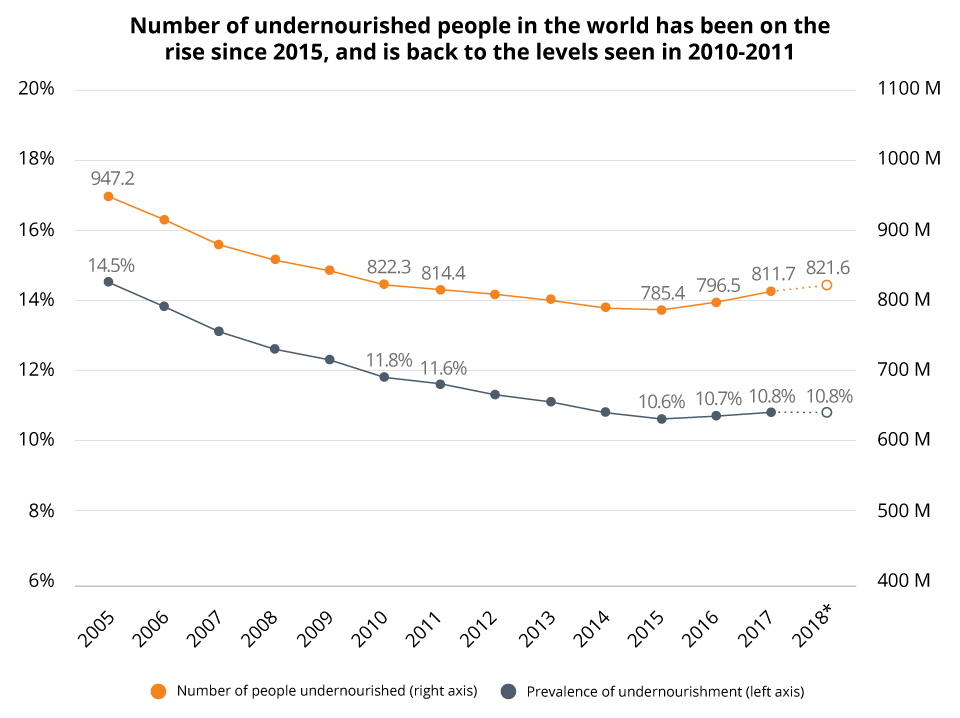 A closer look at malnutrition indicators of wasting, stunting, and childhood overweight reveal striking regional differences. In 2018, Africa and Asia accounted for nine out of ten of all stunted and wasted children across the globe and nearly three-quarters of all overweight children worldwide.

Around 14.9 crore children across the world currently suffer from hunger-related growth delays. The UN report notes that obesity and excess weight are both on the rise in all regions, particularly among school-age children and adults.

A reversal in progress sends a clear warning that more needs to be done and urgently if the Sustainable Development Goal (SDG) of zero hunger is to be achieved by 2030.

The UN Food and Agriculture Organization said current efforts were insufficient to meet the goal of halving the number of children whose growth is stunted by malnutrition by 2030.

“We will not achieve zero hunger by 2030,” said David Beasley, head of the World Food Programme, had tweeted before. Progress has been made, but still one child dies every five seconds of hunger and that is unacceptable, he added.

There are now 821 million hungry people in the world. We are not going to achieve #ZeroHunger by 2030 on this path. Progress has been made, but still one child dies every 5 seconds of hunger and that is unacceptable. #SOFI2018 pic.twitter.com/bcKyL6slFi

Extreme hunger and malnutrition remains a barrier to sustainable development as they create a trap from which people cannot easily escape. Hunger and malnutrition mean less productive individuals, who are more prone to disease and thus often unable to earn more and improve their livelihoods.

Hunger has been on the rise in many countries where the economy has slowed down or contracted, according to the report. The increase in malnutrition between 2011 and 2017 coincided with an economic slowdown or downturn in 65 out of 77 countries.

Even as the root causes of hunger and malnutrition remains to be poverty, inequality and marginalisation, such correlation is critical to understanding at current times when economic growth in many countries is slowing down or stalled.

“Economic slowdowns and downturns often lead to a rise in unemployment and decline in wages and incomes, challenging access to food and essential social services for the poor. People’s access to high-quality, nutritious food can be affected, as can access to basic services such as health care,” the report said.

To speed up progress on both reducing all forms of malnutrition by 2025 and achieving zero hunger by 2030, India can learn from its neighbours. For instance, Bangladesh reported the fastest reduction in child underweight and stunting in history. Stunting in children under five that was at 55.5 per cent in 2004 reduced to 36.1 per cent in 2014. This was “largely by using innovative public policies to improve agriculture and nutrition,” the FAO said in a statement.