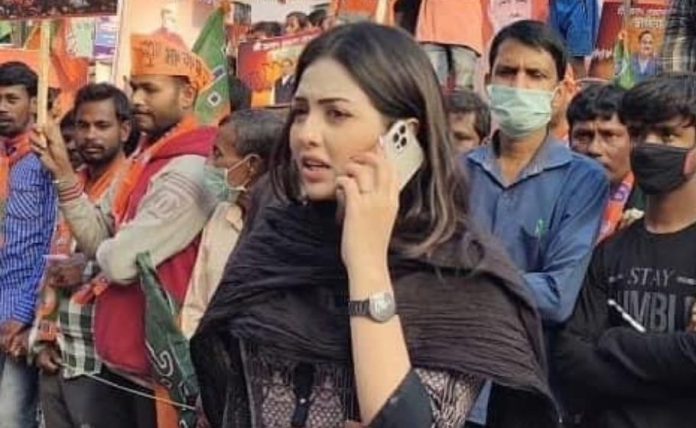 The father of Pamela Goswami, the flamboyant youth wing leader of the BJP arrested for alleged possession of cocaine, had told Kolkata police she had become a drug addict under the influence of a friend whom he wanted to be kept “under watch”, police sources said Saturday.

Sources in the city police said Goswami and her friend Prabeer Kumar Dey, who was arrested with her on Friday, were living together for some time.

Clad in a red saree, a bespectacled Goswami created aflutter at a city court where she was produced, trying to wriggle out of the grasp of police and screaming that Rakesh Singh, a close aide of BJP’s West Bengal pointsman Kailash Vijayvargiya, “plotted” her arrest.

Goswami, a former fashion model and small-time actress, was remanded in police custody till February 25.

Very active on social media platforms where she had taken on celebrities like singer Rihanna over the farmers protest, Goswami was arrested with Dey and her personal security guard Somnath Chatterjee on Friday after 90 gm of cocaine was allegedly found in her handbag and concealed in the car she was travelling.

“I want a CID investigation. Rakesh Singh is close to Kailash Vijayvargiya. Arrest him. This is his conspiracy. I have all evidence,” Goswami shouted, as a battery of journalists followed her into the courtroom.

Claiming that Goswami had been “brainwashed” by Kolkata police and the ruling TMC, Singh said he was not in touch with her for over a year. He said he was ready to face investigation by any agency.

“If I am involved, they can call me or Kailash Vijayvargiya or Amit Shah. I think the police have brainwashed her. I am not in touch with Pamela for more than one-and-a-half-years now,” Singh told PTI.

“It’s possible that the Kolkata police is following the Trinamool Congress’s instructions. They are conspiring against me. These are baseless accusations and I am ready to face any challenge,” he added.

The TMC was quick to grab the opportunity to berate the BJP, its challenger in the assembly election sweepstake.

“Earlier, one of their leaders was arrested for involvement in child trafficking. Now another has been arrested in a drugs case. This proves what the BJP and its leaders are up to,” TMC secretary-general and state minister Partha Chatterjee said.

He was apparently referring to the CID questioning BJP Rajya Sabha MP Roopa Ganguly in connection with an alleged child trafficking case in Jalpaiguri in 2017 in which the party’s women cell general secretary Juhi Chowdhuri was arrested.

The CID had claimed to have unearthed a child trafficking racket where children were sold, some to foreigners, in illegal adoption deals.

Vijayvargiya, the BJP general secretary in-charge of West Bengal, said he has faith in the judicial system and law will take its own course.

“I do not know about this incident and hence will not like to comment. I have full trust in our legal system. If someone is found guilty, law will take its own course,” he told PTI.

Meanwhile, Kolkata police said they had been keeping a vigilant eye on both Goswami and her friend Prabeer following a complaint by her father in April last year.

In his letter to the city police chief Kaushik Goswami had alleged that Prabeer had turned Pamela into a drug addict. He had claimed Prabeer did not keep the promise he made to divorce his wife and get married to Pamela, while requesting police to “keep a watch” on his activities.

“We were keeping an eye on both of them and gathered information about their involvement in drug trafficking. We are questioning them and trying to find out who all are involved with them and whether they have links to inter-state or international drug rackets,” a police officer said speaking on condition of anonymity.

Meanwhile, sources in the state BJP said Goswami was likely to be suspended from the party.

“Most likely the party will take some disciplinary action against her till she is proved innocent. This incident is damaging the party’s reputation,” a senior state BJP leader said.

Goswami had joined the BJP in 2018 and was quite active as part of the Bhartiya Janata Yuva Morcha (BJYM).

In 2020, when Lok Sabha MP Saumitra Khan, a ruling TMC turncoat, was made West Bengal BJYM chief, she was appointed the state secretary and its observer for Hooghly district.

She regularly attended the meetings of top BJP leaders and posted photographs on her Facebook page.