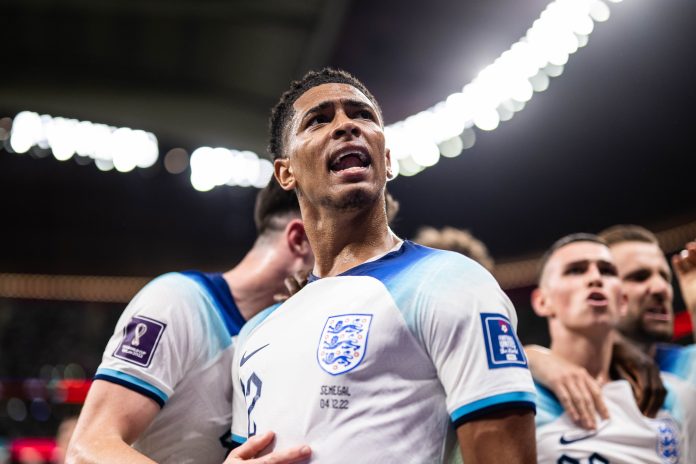 England captain Harry Kane scored his first goal of this years World Cup, helping his team beat Senegal 3-0 Sunday (December 4) and setting up a match against France in the quarterfinals.

Kane scored for the 52nd time for his country to move within one of Wayne Rooney’s England record. He also overtook Gary Lineker as his country’s leading scorer in major tournaments with 11 goals.

“The ball just sat up nicely and the connection was perfect,” Kane said. “I had one just before that I should have done better with so it was nice to see that one go in.”

England, which reached the semifinals at the last World Cup in Russia, will face defending champion France at Al Bayt Stadium on Saturday.

“We enjoyed this one, but of course our focus turns straight to that,” Kane said. “Its going to be a really tough game. They’re reigning champions but itll be a good battle.”

The must-see contest will feature the tournaments leading scorer in Kylian Mbappe and one of its standout players in Bellingham.

Mbappe scored twice against Poland in a 3-1 victory to take his total at this years World Cup to five goals.

Bellingham only has the one he scored in England’s opening 6-2 rout of Iran, but his game is about so much more.

“Goodness me, @BellinghamJude is unbelievably good. Hes the leader in this team. His parents must be so proud. Love him,” Lineker wrote on Twitter after the Borussia Dortmund midfielder crossed for Henderson to score the first goal in the 38th minute.

Up to then, Senegal had been creating the more dangerous chances. Ismaila Sarr sent a shot over from close range and then England goalkeeper Jordan Pickford had to throw out an arm to block another effort from Boulaye Dia.

All that without the teams player, Sadio Mane, who was ruled out of the tournament with an injury before play even started in Qatar.

Everything changed once Bellingham seized control, charging into the box before setting up Henderson. In first-half stoppage time, he went on another unstoppable run, carrying the ball from just outside England’s box and deep into Senegals half. Foden then played in Kane to double England’s lead.

With the 1966 World Cup champions well on their way to a showdown with France, Saka scored in the 57th minute by converting Fodens cross.

The match was played to the beat of the Senegal fans drums, which provided the soundtrack from start to finish. Englands fans struggled to be heard over the noise even when the result was beyond doubt.

Raheem Sterling was ruled out before the match started because of a family matter. England coach Gareth Southgate did not offer any indication if or when the forward would be able to return.

Bellingham became the youngest England player to provide an assist at a World Cup.