The coronavirus pandemic has dominated our thoughts and news for the better part of 2020. The juggernaut of this disease seems to have rendered irrelevant everything that came before it. It behooved humankind to rally all its forces to fight this extraordinary situation together, forgetting all its social, cultural, and racial differences. And for a while, it seemed to be doing so. 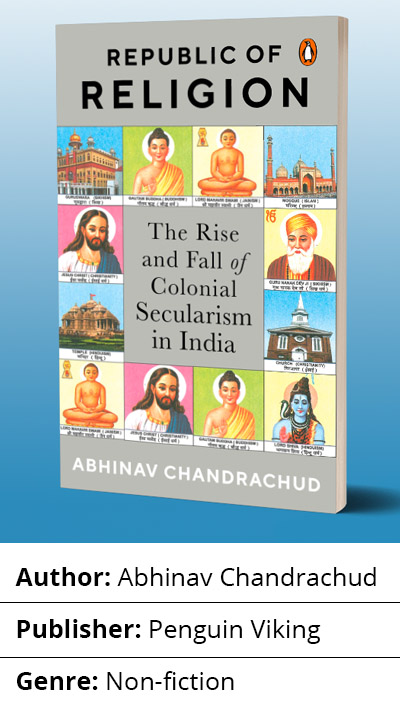 But ideals fall soon through the cracks of reality, and people resort to discriminatory behaviours even when death stands at their door. Rewind this horror film of a year a little, and you’ll recall the mass condemnation of the Muslim community due to the unfortunate cluster spread due to the Tablighi Jamaat episode. Rewind a little more and you’ll recall still more blatant instances of discrimination against Muslims in the form of the CAA-NRC laws, which inspired historic protests. Pandemic or no pandemic, the majority finds a way to stomp upon the lives, rights, and dignities of the minority.

Of solid foundations and shaky grounds

In a nation of Hindu majority, now ruled by a Hindutva-espousing government, this is neither surprising nor new. The scale and brazenness may have increased, but the clash of religions has been a constant in the ‘sovereign, socialist secular democratic republic’ of India.

Why that is, is the question that Dr Abhinav Chandrachud tackles in his fifth book, ‘Republic of Religion: The Rise and Fall of Colonial Secularism in India’. The author comes from an illustrious legal lineage, what with his father Dhananjay, and his grandfather, Yeshwant, being most renowned Justices at the Supreme Court of India. In addition to having the benefit of two generations of legal perspective, Chandrachud brings to the table his PhD in Legal History from the Stanford University Law School. His erudition shines through this book as he offers a historical account of the secularism premise upon which much of modern India’s identity rests.

The book makes three main claims that explain why the ground of secularism is shaky. Firstly, he notes that the British introduced the idea of “colonial secularism” into India – something they did not themselves employ back in the UK. Secondly, the secularist stance was softened by Indian legislators once the nation became independent. Thirdly, the ideal of secularism had started deteriorating long before the saffron nexus started their gremlin act.

The language of otherness

In India, religious and social constructs and contexts overlap inexorably. It is often impossible to separate one from the other, but some issues rate extra high on the ‘religious sentiments’ scale. Chandrachud picks six such issues and explains the complex evolution of the laws around them. These issues form the basis of the six main chapters of the book and are called ‘Holy Cow’, ‘Profess, Practise, but Don’t Propagate’, ‘I Cannot Vote for Mr Jinnah’, ‘Temple and State’, ‘To Divorce Religion from Personal Law’, and ‘Secularly Swearing’.

Before delving into the ‘beef’ of the matter, Chandrachud presents some very illuminating trivia in the introduction to the book. He mentions, for example, how the word ‘gentoo’ used to describe Hindus by early European Christian colonisers was a corruption of the word ‘gentile’ in the sense that implied heathenism. Incidentally, the same word was used to describe Christians by Jews in before and in the early parts of the Common Era. This illustrates how the language of othering forms the basis of and/or is the result of religious discrimination. He also suggests how these lines of discrimination were not drawn so deeply before colonial tools gave them teeth. One is amazed to learn how in the census of 1911, a population of nearly 2,00,000 in Gujarat described themselves as ‘Mohammedan Hindus’. The British obsession with classification, categorisation and indeed control sowed many a seed of dissent in our soil.

Chandrachud argues how the British government imposed a form of secularism upon India that they never themselves followed. When they first introduced it as an educational policy, they did so “in order to pave the way for the introduction of Christianity in India, and later abandoned in order to make India less disloyal to Britain and possibly more deeply divided within itself.” Later in the book, he even goes on to say that “the colonial government quite possibly used secularism as part of its divide and rule policy to consolidate its hold over British India.”

While this imposition of secularism did modern India significant good, it also became the reason for incessant discord in a nation that was used to using religious frameworks in personal, social and legal spheres.

As Chandrachud points out, the introduction of secular laws around cow slaughter, the practice and profession of religion, electoral reservations, religious institutions, marriage and oaths often became the reason for endless bickering among Hindu and Muslim leaders. He charts a meticulous path through several acts and laws through which the current Indian Constitution and Penal Code were arrived at.

The book is replete with the backstories of several Articles, which help one appreciate the painstaking aspects and nuances of the law-making process. For instance, one learns under what circumstances certain articles came about: Article 48, which bans cow slaughter; Article 19, which grants the freedom of speech; Article 25, which offers freedom of conscience and free profession, practice and propagation of religion; and Article 26, which gives any religious denomination the freedom to manage religious affairs (subject to public order, morality and health), among others. Excerpts from parliamentary debates, views of Indian leaders and social reformers and those of our erstwhile British masters all shed light on how these laws were born.

In reading about an Ambedkar demanding separate electorates for backward classes, about the application and revocation of a Uniform Civil Code, about the Intelligence Bureau still keeping track of religious conversions, about courts deciding what is essential to religion and what isn’t, one finds a gateway into the endlessly fascinating and complex universe that the legal world is.

Related news: Beyond east and west: A world of objective erudition, research

The book offers great insights and helps expand awareness for an ordinary reader, whose notions of the courtroom and the legal profession are mostly informed by popular media a la “Main Gita pe haath rakh ke kasam khata hoon ki main jo kahoonga sach kahoonga aur sach ke siva kuch nahi kahoonga! (I swear by the Gita that I will speak only the truth)” Well, there’s so much more to the story, Mi Lard!

Why Kumbh in times of corona is reasonable for some, baffling for ot...

Adityanath finds secularism a threat to recognition of Indian tradit...

Our God, our faith: Why tribal communities want a separate religious...