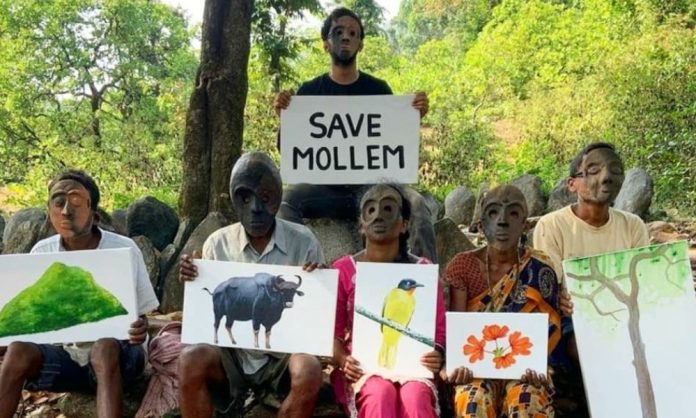 While the farmers’ protest on the Delhi borders has been in the limelight since it began last year, ordinary citizens of Goa are fighting a prolonged battle to preserve two wildlife sanctuaries, mostly unknown to the outside world.

Despite less media attention, artists, ecologists, scientists, and other members associated with the My Mollem (Amche Mollem) campaign have no plans to stop their movement, run by a highly motivated social media grassroots campaign.

The campaign has been the backbone in the fight against three proposals which envisages clearing the forests in Mollem and the Bhagvaan Mahavir Wildlife Sanctuary.

Goa-resident Gabriella, a marine ecologist and member of the Amche Mollem campaign, said, “This new phase of the campaign is resilience, respect, and reimagine. It focuses on understanding the aspects of good governance, respecting our land better, and learning from the generations that came before.”

Svabhu Kohli, a visual artist who is part of the movement since inception, said, “We met exactly one year ago, and we were just four people; two artists and as many scientists.” He said that people realize that the COVID-19 pandemic was the result of people interfering with nature unduly. He pointed out that cutting forests might unleash more zoonotic diseases like coronavirus in our world.

In April 2020, the National Board for Wildlife, under the direction of Union Environment Minister Prakash Javadekar, had put forth two proposals for a four-lane highway expansion with the laying of a 400-kV electricity transmission line. The government had already decided to double the railway tracks that cut across the forests in December 2019.

A year later in April 2021, the Central Empowered Committee (CEC) had issued recommendations to the Supreme Court against the three projects. The Goa Foundation had filed a petition to the CEC in July 2020, alleging that the clearances granted to the projects violated the law. However, that is not the only thing to look forward to, according to Kohli.

“The Amche Mollem project doesn’t end with these three projects even though that brought us together. We want to reshape the lens with which we see our forests for healthier management of our ecosystem,” said Kohli. He reiterated that this is about creating awareness of the larger picture instead of just looking at the three projects.

He added that the movement’s motive was to create an interdisciplinary pool where people from different streams can share knowledge. They focus on how to bridge the information in research papers with common masses through visual representations.

Nandini Velho, a wildlife conservationist, said the campaign will continue even as the Supreme Court accesses the CEC recommendations.

The narrative of development

Pramod Sawant, Goa’s Chief Minister, has said the infrastructure is for the development of the state.

Velho said, “If people are against it (the development project), then that should be the answer.”

The government should be able to show other social and health benefits if they clear such a project. People are the real stakeholders.

However, this does not mean that people are against development. Kohli said, “We are not anti-development. We work with engineers to find solutions on the best way to carry out development without harming the ecosystem.”

The world celebrated World Environment Day on June 5, 2021, with the theme of ecosystem restoration. Taking this view forward, the campaign will focus on creating awareness that will sustain a healthy ecosystem.

Sapling audit: Why other cities should take a leaf out of Delhi̵...