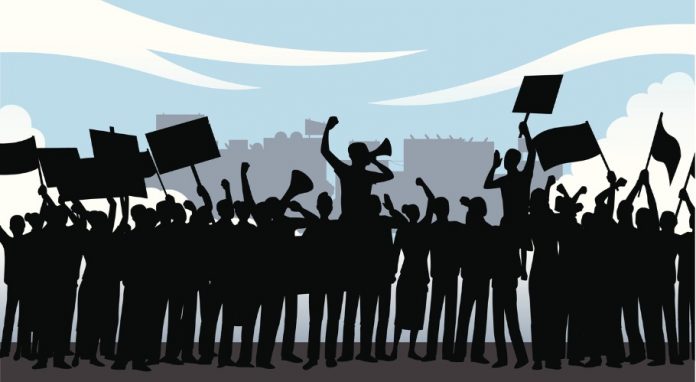 Campaigning is on in full swing even as the first phase of West Bengal assembly elections concluded Saturday. Surprisingly, even as media reports abound on which political rally attracts a bigger crowd, there is little debate on the use of environmentally hazardous materials such as flex and single-use plastic, and noise pollution during public rallies.

Campaigns generate large volumes of waste; an average of around 60 crore kgs per month, according to Subhas Datta, a well-known Kolkata-based green activist, who had, on February 22, written to 13 political parties in West Bengal to abide by environmental norms while campaigning.

Waste disposal, too, is a cause for concern as materials such as flex cannot be burned as they emit harmful pollutants and eventually end up in landfills.

Kolkata-based Ajay Mittal, director, Climate Change Programs, India and South Asia, had recently captured photographs and videos of waste strewn around after a major rally in Kolkata. He had registered a complaint with the Election Commission of India (ECI), which was acknowledged. The Bharatiya Janata Party (BJP) workers had cleaned up Maidan after the party’s rally in the iconic central Kolkata location.

However, Ajay contends that the whole process of electioneering is currently unsustainable. “It is contradictory to what political parties pitch — that they we will make our cities better. There cannot be polluting activities in the name of campaigning,” he says.

The solution to preventing environmentally hazardous campaigning, therefore, is to adopt eco-friendly alternatives. Ajay says: “If campaigning is done in a more sustainable way it will be cost-effective for political parties as they could reuse and recycle cloth and paper. Compostable bags can be used and more digital campaigns can be conducted.”

Political parties have, in fact, gone digital not just through social media platforms but in other creative ways. The Trinamool Congress (TMC), for example, recently launched a new campaign video based on the popular video game of the yesteryears, Super Mario.

Another effective and age-old eco-friendly mode of campaigning is poll grafitti which works well if it does not create visual pollution.

Take Kolkata’s Bidhanangar Dattabad Ward, for example, where local women have painted ‘alpona’, ‘patachitra’, ‘ghot’, among other aesthetically appealing paintings on walls. The paintings emphasise the message: “save the environment.”

Nirmal Dutta, Ward 38 coordinator of Bidhannagar Municipal Corporation, says: “I had planted trees in my ward after many trees were uprooted due to Cyclone Amphan. So we decided to give out a message through our poll grafitti that environmental issues must also be raised in political campaigns.”

To curb noise pollution, parties must adhere to the directions passed by the Supreme Court, Calcutta High Court and the National Green Tribunal to control and regulate excessive noise.

Related news | Solar power gets cheaper; it’s time we moved away from coal for electricity

Subhas, in his letter, states: “As per the Order No. 1853-4K-5/2004, dated 27/08/2004 issued by the State Pollution Control Board, no microphone can be played in the State of West Bengal without fixing sound limiter. The State Pollution Control Board has further issued Notification No. EN/T-IV-6/001/2007 (P+11), dated February 3, 2010, by which prohibition has been imposed on the use of loud speakers fitted with running vehicles deployed during the time of holding processions.”

Environmental issues are still not given the priority it deserves in poll campaigns.

Subhas takes note of this in his letter: “There are frequent lectures and seminars on this subject but the ground reality is zero. Social, political, and economical issues are given priority, but no mandate is at all there for environment. This is now the call of the day that all political parties should rise to the occasion and include elaborately all the environment issues in their mandate. This aspect should be looked into.”

Kolkata-based transgender activist, Raina Roy, who works with Kolkata-based environment group, Jaladarsha Collective, says environmental issues not being prioritised is primarily due to lack of awareness. “Within election campaigning how deeply are environmental discussed? Do people campaigning themselves know and understand climate change?”