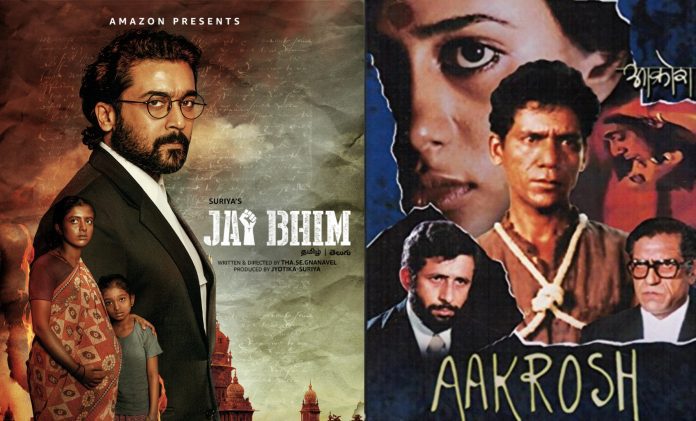 T J Gnanavel’s Tamil film, ‘Jai Bhim’, a courtroom drama, continues to hog the news for one reason or the other. Either the Vanniyar community seems hurt by certain portrayals in the film with former Union Health Minister Anbumani Ramadoss dashing off a letter of protest to actor Surya, or for the accolades the film is picking up. Or, even the support that is pouring in for voluntary organisations supporting the rights of tribals.

The film, based on the true story of a Madras High Court lawyer who takes up the case of a tribal woman Parvathi, whose husband disappears from police custody, has also been received well in Bollywood.

Some film reviewers are however comparing it to Govind Nihalani’s arthouse film ‘Aakrosh’, which released in 1980. The debut film of acclaimed filmmaker Govind Nihalani, ‘Aakrosh’ is considered as one of the early films that had paved the way for the emergence of Bollywood’s new parallel cinema. Scripted by the well-known Marathi playwright Vijay Tendulkar and based on a true incident, the film has even bagged the National Award for the Best Feature Film in 1980.

Starring Om Puri, Naseeruddin Shah, Amrish Puri and Smita Patil in the lead roles, the film is centred around how a tribal man gets wrongly incriminated in the murder of his wife and how the judicial system turns a blind eye to the injustice meted out to him.

Lahaniya Bhiku (Om Puri), a tribal, ekes out a living by working in a forest. He opposes the corrupt practices of the forest contractor, who sets out to take revenge on Bhiku. The contractor, along with few of his powerful friends in the government, rapes Bhiku’s wife, Nagi (Smita Patil). Ashamed of being raped, she jumps into a well and kills herself and the antagonists implicate Bhiku in the murder and send him to prison.

The government appoints Bhaskar Kulkarni (Naseeruddin Shah) as a defence lawyer in the case, who happens to be a former junior of the public prosecutor, Dusane (Amrish Puri). Hailing from a dominant caste, Kulkarni is at first hesitant to take up the case but he eventually accepts. What is ironic here is that Dusane, who is a tribal himself, seems indifferent to the crime committed on members of his own community. Probably, aware that the system is largely tilted against them.

While an earnest Kulkarni tries to get to the truth behind the case, Bhiku refuses to cooperate with him. Every time Kulkarni meets him in the prison, Bhiku remains stubbornly silent. So, Kulkarni investigates the details of the case on his own to understand the problem. How he uses the findings in the case and whether he succeeds in saving Bhiku forms a rest of the plot.

So, where does ‘Aakrosh’ converge with ‘Jai Bhim’? The common factor between the two films are that both deals with atrocities against the tribals. Secondly, just like ‘Jai Bhim’, ‘Aakrosh’ too is a courtroom drama. The court depicted in ‘Aakrosh’ brings the real life sessions court located in a district as closely as possible.

Moreover, just like the former judge of Madras High Court, K Chandru (played by Surya) in ‘Jai Bhim’, Kulkarni too, cycles all the way to Bhiku’s village to learn what really transpired. While ‘Jai Bhim’ discusses how police authorities cover up the ugly facts with the help of their higher ups in the government, ‘Aakrosh’ too talks about the nexus between politicians, police and medical fraternity to hush up the facts about the rape.

But that is where the comparison ends. ‘Jai Bhim’ tends to openly spotlight caste inequalities, as even an accidental touch of the tribal victim Rajakannu (played by Manikandan) while traveling on a bike is met with an angry look by the rider (an upper caste man). Or, even when lower caste men are separated and selected to be able to foist false cases on them. While in ‘Aakrosh’, it is tackled in a more subtle manner showing the complex character of Dusane being reminded of his origins only through telephonic conversations.

While ‘Jai Bhim’ tells the tale of a community living in the outliers witnessing oppression on a daily basis through the lens of a lock-up death of a single tribal, ‘Aakrosh’ talks about the marginalised through a single tribal’s speechless agony.

‘Aakrosh’ does not dwell too much on the portrayal of female characters. In ‘Jai Bhim’, the fight is taken up by a much pregnant woman tribal, while Pachaiyammal (played by Subhadra) also comes across a strong woman. In ‘Aakrosh’, Bhiku takes the decision to decide the brutal fate of his younger sister (played by Bhagyashree Kotnis) in his own hands. Moreover, this film is not focussed on police brutality.

‘Aakrosh’ too is highly successful in bringing out Bhiku’s emotional turmoil through his silence. His eyes and his face speaks of his inner agony. Om Puri excelled as the tribal, who remains sotically oblivious to the judicial proceedings around him. In ‘Jai Bhim’, the characters are all highly vocal and express their feelings in sync with the film being a commercial one.

Above all, while the climax of ‘Jai Bhim’ pins its hope on our judicial system and justice gets served, ‘Aakrosh’ ends on a negative note. It offers no solution to the problem. But the film went on to become one of Indian cinema’s best films that discusses oppression of the marginalised in cinema, probably for that reason!