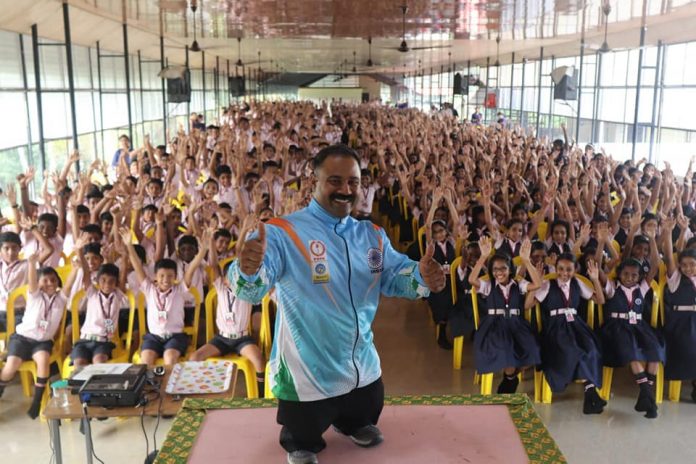 Even though Joby has won many medals, he hasn’t got any help from the state government

With a pair of stunted legs and a height of three feet and five inches, he won 24 medals for India in various categories. His dream is to win a medal in powerlifting in the Summer Paralympics to be held in Paris in 2024.

Joby Mathew was born on a festival day in the famous St Thomas Cathedral in Pala (in Kottayam) in 1976, but the festive mood didn’t last as the doctor noticed two stunted legs of the new-born. Caused by Proximal Femoral Focal Deficiency, the disability was too much for a poor agricultural family which lived in a remote village 5 km from Adukkom, the nearby town, 24 km from Pala. What worsened the scenario was, Joby lost his father when he turned five.

Even though Joby’s handicap remained a question mark, his mother tried to find answers to the misery by sheer willpower. She took her son to a nearby government school, where he was denied admission due to his disability.

Joby’s mother then sent him to a rehabilitation centre for the disabled in Changanassery where he studied till class 10. Even though he stayed at the hostel while pursuing his pre-degree at the famous SB College, Changanassery, coming home during vacation was challenging because there was no proper road to his house.

When his friends commuted on foot, Joby walked on his hands. “We lived in a remote village which was 5 km away from Adukkam. There was no proper road to my home. At a time when I was struggling to walk even through a road, moving through the uneven rubber plantations using my hands was difficult. My nails would break every other day. My hands always had a wet smell of blood and mud,” says Joby.

Things became worse when he joined St George’s College near Erattupetta, 38 km from Kottayam, to pursue his graduation. Since the college didn’t have a hostel, Joby had to commute on his hands every day from his home and back through the rough terrains.

On the way, Joby had to cross many rivulets and ponds. Trunks of coconut trees were used as a bridge to cross them.

“I would lose my balance on such bridges made of single tree trunks. There were many such crossings on my way. To avoid the fall, I would find a place where the level of water is low so that I could cross without much trouble,” says Joby. However, walking almost 14 km every day, to college and back, using hands made him fit and strong.

Joby’s love for sports developed from a sense of disregard. His friends ignored him in the games that they played. Joby soon realized that arm wrestling was the only sport where his handicap wouldn’t be an issue. He was right.

He soon approached a gym but the instructor told him that he didn’t know how to train disabled people. Joby, however, requested him to just sit and watch what people were doing inside a gym, which the instructor allowed.

He told Joby not to touch any of the instruments there. Joby would go, sit and watch and many months passed by and one day, he again approached the instructor and asked whether he could use the dumbbells to strengthen his wrist and biceps. The instructor permitted him to use only a pair of 2 kg dumbbells.

Starting with a pair of 2 kg dumbbells, Joby soon moved to other workouts like others in the gym. It didn’t take him long to beat all his opponents hands down and his reputation as an arm wrestler started to grow. It was a turning point in Joby’s life.

Even though he was a champion in school in arm wrestling, he went one step ahead in college. He wanted to participate in the World Arm Wrestling Championship in Japan in 2005. But lack of sponsorship was a stumbling block.

However, an article in a national newspaper about Joby changed everything. He got a call from actor-politician R Sarathkumar who asked Joby to meet him on his upcoming trip to Ernakulam.

“He (Sarathkumar) called me when he came to Ernakulam for shooting. I met him and he said he would sponsor my trip to Japan,” says Joby, who is now a manager in Bharat Petroleum, Ernakulam.

Having participated in both general as well as special categories in the World Arm Wrestling Championship in Japan, Joby won three bronze medals in left hand normal category and left and right hand physically challenged category. When he returned to India with medals, Sarathkumar organised a grand reception for the hero in Chennai.

“It was a great moment in my life. I can never forget it. When I returned to Ernakulam from Chennai, the pilot even mentioned my name during his announcement,” he adds.

Joby has so far won 24 medals (nine gold, nine silver and six bronze) in various categories for India. In the World Arm Wrestling Championship held in Spain in 2008, Joby won a gold in left hand normal category and a silver in the right hand physically challenged category. He holds the unique record of having won the world championship gold in arm wrestling in the general category held in Spain in 2008. He won two silver medals in the Arm Wrestling Championship held in Egypt in 2009.

In addition to arm wrestling, Joby has been a constant presence and a winner in badminton (both singles and doubles), shot-put, javelin throw, discus throw and wheel-chaired fencing. Joby won a silver medal in the badminton singles at the Israel Open Paralympics Badminton Tournament in 2010. He won three medals in the World Arm Wrestling Championship held in Spain in 2012. In the World Dwarf Games, held in the US in 2013, Joby won five gold medals in various categories (Shot-put, Javelin throw, Discus throw, Badminton singles and doubles). He won two bronze medals in the World Arm Wrestling Championship for the disabled held in Poland in 2014. In 2017, Joby won six medals (two gold, three silver and one bronze) at the World Dwarf Games held in Canada.

Joby, a brown belt holder in Karate, is a member of the Kerala state parasailing and paragliding teams and is also an accomplished swimmer. He lives in Aluva, 17 km from Ernakulam, with his wife and two children.

The schools that denied him an admission today teach their students the inspirational story of Joby, as there is a chapter on him in the Kerala state syllabus.

A story of inspiration and hope, Joby dreams big. He wants to win more gold for his country. “If you are ready to work hard and make sacrifices, there is nothing that you can’t achieve in life. My life is an example,” says Joby, who won a gold medal at the recently held Kerala State Powerlifting Championship by lifting 152.5 kg in 66 kg category.

Even though Joby has won many medals, he hasn’t got any help from the state government. “I approached the Kerala government many times, but I didn’t get any help. My company (Bharat Petroleum) always encouraged me,” he says.

For Joby, the journey will continue. “I want to win a medal in powerlifting in the Summer Paralympics in Paris in 2024. I am working hard to achieve my goal,” says Joby with his hallmark smile.