‘Boycott Chinese products’ was a hashtag that was trending vigorously on Twitter ever since the standoff between India and China escalated at the border. After having guiltlessly pre-ordered OnePlus, Redmi phones, playing Pubg, many of us went on to propagate the ‘boycott Chinese products’ message even on TikTok. Yes, you read that right.

Taking the entire anti-China sentiment a step further, Union Minister Ramdas Athawale called for boycotting Chinese food, and restaurants that sold Chinese food items in the country. It was fresh bait for meme creators after his ‘go corona go’ mashup, but restaurateurs were fuming and Chinese food lovers were left in a pickle. The funny question however is, what is the need for all the ruckus when what we eat here is not even authentic Chinese?

It is a common sight in a food street of any city, a small stall which says ‘Chineese Corner’ listing schezwan noodles, spring roll, chicken fried rice, gobi manchurian, and chilli chicken on its brief menu. You can hear these stalls a few blocks away, by the clanking sound of the cook tossing the rice with the wok and ladle, and also the smell of ajinomoto. This is one type of Chinese food we see in our country.

Another is the fancy red take-out boxes in which the food is mostly spicy, excessively greasy, thick cornflour infused gravy with noodles or rice. Names on the menu like Kung Pao, Bao, Dim sums tricks us into believing that we are eating authentic Chinese food. Bonus points for the Chinese letters and Buddhist temple symbols on the pamphlets!

This is the kind of Chinese food most of the Indians are aware of, also exactly the kind of food we crave for.

Is it really Chinese?

Essentially it is neither Chinese nor Indian, but Indo-Chinese, which is a separate cuisine by itself. It is an adapted version with more Indian ingredients to suit the local food preferences and taste buds. The fusion Chinese holds little resemblance to authentic Chinese. “Most of the dishes we eat now under the pretext of Chinese were developed in India. If you go to China and ask for Schezwan chicken or Manchurian they will blink,” said chef Aravind who is the corporate chef of Nasi and Mee, a popular Pan-Asian restaurant in Chennai. 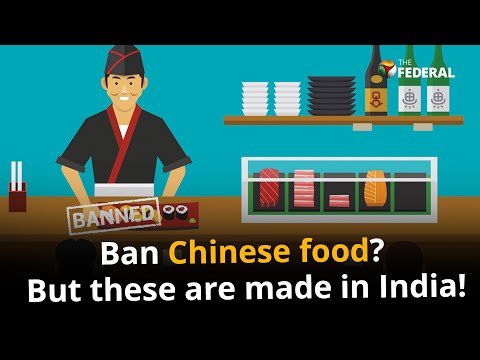 There is a general misconception that people in China eat food that is bland or raw like undercooked meat, thanks to the viral video of a Chinese woman having bat soup, which was speculated to have caused the virus outbreak. However, this common belief is wrong as eating raw meat is a part of Japanese culture, in the form of sushi, and not the Chinese. China being a vast country is divided in its own taste and food culture.

The northerners eat salty similarly southerners eat sweet, easterners eat hot, while westerners eat sour food. “In China there is a region called Sichuan which is in the central-eastern region and different types of food are available there. There is no such thing called Sichuan/Schezwan fried rice or chicken there. Black bean sauce, kung pao chicken are all from the Sichuan region. The Sichuan and Hunan region dishes are what you find popularly in India as they are spicy and are synonymous with Indian flavours,” said Aravind.

There are some common ingredients that are used in authentic Chinese and Indian cooking like ginger, garlic, cumin, cinnamon, and cloves. But ingredients like soya sauce, fermented black bean, roasted sesame oil, Sichuan pepper which gives a tongue-numbing spice, are specific to Chinese cooking. Many of these ingredients are imported and now used in contemporary cooking in India.

The advent of Chinese cuisine in India dates back to late 19th century, when Chinese immigrants of Hakka ancestry introduced Hakka dishes in Kolkata, where they settled. They understood the Indian culture and incorporated authentic Indian flavours in cooking. They offered rice, noodles, chop suey, and soup during religious rituals as a symbol of unity.

The new cuisine became a local favourite, and in 1920 for the first time, an Indo-Chinese restaurant called Eau Chew opened in Kolkata serving cutlets and pork chops. Soon thereafter, several shacks and restaurants mushroomed in Kolkata’s Chinatown and the word about chowmein, stir fried noodle delicacy slathered in soya, red, green chilli sauces, and vinegar spread across the country.

Restaurateurs started giving their own Indian spin to these dishes with more Indian spices, and cashed in on the popularity of a seemingly western cuisine, tweaked to satiate the local taste buds.

Why is the cuisine so popular?

“It has a perfect balance of sweet and tang. The dragon chicken coated in a mixture of sauces is sticky and sweet and I am salivating even as I am talking about it,” said Geethika, a chinese food enthusiast. She said that momos have almost become a staple snack for every college goer, as there is at least one momo stall near college campuses. However, she said that she would not be too keen on travelling to China to taste their original cuisine.

Well, it is clearly debatable if it is really Chinese cuisine or Indo-Chinese that is popular. Either way, the ones cooking these dishes are Indians in restaurants run by Indians, hence ‘go chowmein go’ seems highly unlikely.