A little peek into history can hopefully provide the setting: On the evening of Saturday, October 20, 1973 and at the height of the Watergate scandal, President Richard Nixon ordered Attorney General Elliot Richardson to fire Independent Special Prosecutor Archibald Cox. Richardson refused and resigned.

Ten days later on October 30, 1973 the impeachment process against Richard Nixon began against the backdrop of highly damaging and negative political and public opinion to what came to be known as the ‘Saturday Night Massacre’. Cox’s written statement to the media as read out by his aides made a stunning point, “Whether ours shall continue to be a government of laws and not men is now for Congress and ultimately the American people.”

What Cox said in 1973 is what A Warning by Anonymous is all about. From a pool of about 17 candidates in 2016 the Republican Party settled for Donald Trump – a person, in the view of the Anonymous senior administration official, who has scant respect for the Constitution, laws, institutions and even respected persons holding high offices of governance, be it in the executive, legislative or judicial branches of the government. What seems to be even more worrying to the group of the so-called Steady Staters — those who are earnestly seeking to keep the administration and Presidency going — is of a President who is so mean minded that he would go to any lengths to pick a fight, be it with his own staffers, government officials, members of Congress or even foreign leaders. If something is not in the framework of Trump, however crazy that might be, then it must only be a conspiracy on the part of officials to bring him down!

Anonymous makes the point that a “midnight self-massacre” of all top aides to the President resigning was indeed contemplated but quickly abandoned out of a fear that it could make a bad situation worse. But steadying a tottering administration has not improved in any fashion close to four years of the Trump Presidency.

The question according to the author is whether America and American people could afford four more years of a man “prone to abuses of power, from ill-conceived schemes to punish his political rivals to a propensity of undermining vital American institutions.” But the case against the President goes far beyond any erratic management style, rancor, fixations against political opponents but of a President who appears to suffer from a delusional notion of power and the limitations that come with the Executive branch of government. “He does not know how the Executive branch works. As a consequence he does not know how to lead it,” has been the refrain.

But what was the rationale for ‘A Warning’ that was preceded by an Op-Ed in The New York Times on September 5, 2018? The petty thinking of a sitting President to order his aides to pull up the American flag to full mast — when it was already lowered to half-mast — at all government offices and the White House upon the passing away of the Vietnam war hero and Republican Senator John McCain.

Fortunately a huge embarrassment was saved by aides who convinced Trump that the blistering criticism and outrage of his morally unacceptable decision will leave its imprint on the Presidency. For a person who took multiple deferments for not serving in the Vietnam War — four for education to study at Fordham University and the University of Pennsylvania and one for an ostensible health issue, Trump’s umbrage against the war decorated McCain had to do with the Republican Senator turning against him for making the outrageous acknowledgement of having “grabbed” women. Many prominent personalities like Senator McCain did not think this was “locker room” talk.

The problem with President Trump is not about what he knows or does not know. It is in the fear of what he could come up with, certainly not at the bidding of his top aides. Past Presidents like Ronald Reagan and George W Bush have been attributed by scholars and academics as being inadequate in either domestic or foreign policy or both. But the difference was that they had surrounded themselves with distinguished and capable officials like Edwin Meese, Alexander Haig, William J Casey, George Shultz, Condoleezza Rice, Colin Powell and Robert Gates, to mention a few, and listened to advice and suggestions. In the case of the Trump Presidency, it has been more like a revolving door with advisors and aides reluctantly coming in and abruptly pushed out a short while later with many of them coming to know of their departure through Presidential tweets.

“Among us friends, let’s be honest. About a third of the things the President wants us to do are flat-out stupid. Another third would be impossible to implement and wouldn’t even solve the problem. And a third of them would be flat-out illegal,” was the summation of a prominent Presidential advisor as quoted by Anonymous. And another West Wing advisor put it different but more pungently: “He’s (Trump) crazy as a lunatic.” And one example would be in the President’s fashion to solve gun problem and shootings in schools. “If you had a teacher who was adept at firearms, they could very well end the attacks very quickly,” said Trump. The crux of the proposal: distribute guns to teachers to solve shootings in schools. “It’s a crazy proposal. So what should we do about reducing airline hijacking Give all the passengers’ guns as they walk on,” a violence expert has been quoted. 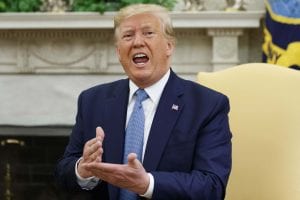 Anonymous makes the point that Trump cannot be written off easily as a “disruptor” because of the unorthodoxy he brings about. “We have had incurious presidents. We have had inexperienced presidents. We have had amoral presidents. Rarely if ever before have we have had them all at once. Donald Trump is not like his predecessors, everyone knows that. But his vices are more alarming than amusing. Any entertainment derived from seeing this sort of irreverent behavior in the West Wing quickly wears off and is replaced by lingering dread about what comment, tweet or direct order might come next,” the author says. An unnamed foreign leader is said to have begged senior aides to have Trump stop tweeting. But foreign leaders have not exactly been at the center of the President’s wrath by way of tweets — that Trump has reserved for his intelligence community with the Central Intelligence Agency (CIA) and the National Security Agency being the most maligned. “They’re political hacks” Trump has said of the men and women who zealously guard American national and security interests. At various times Trump has questioned and ridiculed publicly the findings of intelligence agencies.

Paranoia would seem to define the Trump Presidency, a strange feeling of the President that everyone is out to get him which is why he is so distrustful of aides, advisors, agencies and members of Congress particularly Democrats. “Are you ****ing taking notes? Are you ****ing taking notes”, Trump is said to have screamed twice at a staffer during a meeting when it is quite normal for aides to make notations as a reminder to themselves to follow up on a directive.

Somehow the thinking of Trump is that people are telling the media and his detractors of what is taking place in closed door sessions at the White House. But the real problem seems to be the man himself who flip flops on his own illusions and perceptions to the point of portraying himself in a negative way. He wants to get rid of the Electoral College that made him President; rails at Congress that he did not win the popular vote because millions of people were denied voting; the political opposition is a bunch of criminals, the FBI is corrupt, there are far too many judges who ought to be fired, “shithole” countries have been ripping off America and so on. Deliberate untruths and lies spread to convince his supporters to believe in absurdity. “He spreads lies he hears. He makes up new lies to spread. He lies to our faces. He asks people around him to lie. People who have known him for years accept it as common knowledge,” the Anonymous senior administration official notes making the point that appointees of the President have the “humiliating chore” of defending Trump when he is wrong or patently speaking falsehood.

If the President is so crazy or even deranged to the point of being unfit to sit in the Oval Office, why not invoke the Twenty Fifth Amendment that deals with Presidential succession in the event of resignation, removal, incapacitation or death? Well, according to Anonymous senior officials did get into this 25th Amendment territory as they found the President’s behavior “so erratic” in the aftermath of the firing of the FBI Director James Comey and in Trump demanding the Justice Department that the Special Prosecutor probing the Russian connection in the 2016 election, Robert Mueller, be fired. Anonymous says that things were so bad that the Deputy Attorney General Rod Rosenstein reportedly considered wearing a wire to West Wing meetings to document the “madness” at the White House. But the idea of invoking the 25th Amendment was quietly dropped for many reasons one of which being — can anyone imagine Trump leaving the White House quietly as Richard Nixon got onto Marine One in the lawns of the White House in 1974? This is the same scenario that will come to haunt many in the unlikely event Trump gets impeached.

There are two choices according to Anonymous. “The first: is a man fit or unfit to be president. And the second: are we worthy or unworthy of the blessings of liberty? One will be decided by ballot and the other by our behavior in the weeks, months and years to come,” the senior administration official has said.

The Epilogue of the book recaptures the final moments of United Flight 93 from Newark to San Francisco on September 11, 2001 (9/11) when hijackers stormed into the cockpit, slashed and killed the flying crew and diverted the plane towards the Washington area where the target was supposedly the White House. It was then Todd Beamer, a passenger and others decided to take on the hijackers and wrest control of the plane. Beamer’s last words were, “You ready? Okay. Let’s roll”— the struggle in the cockpit lasted a short while and the plane crashed in Shanksville, Pennsylvania, barely twenty minutes away from Washington DC.  All 44 aboard perished.

And Anonymous’ last words in his book: “Let’s roll”.

(The author was a senior journalist in Washington DC covering North America and the United Nations.)

US to limit visas for pregnant women to curb birth tourism