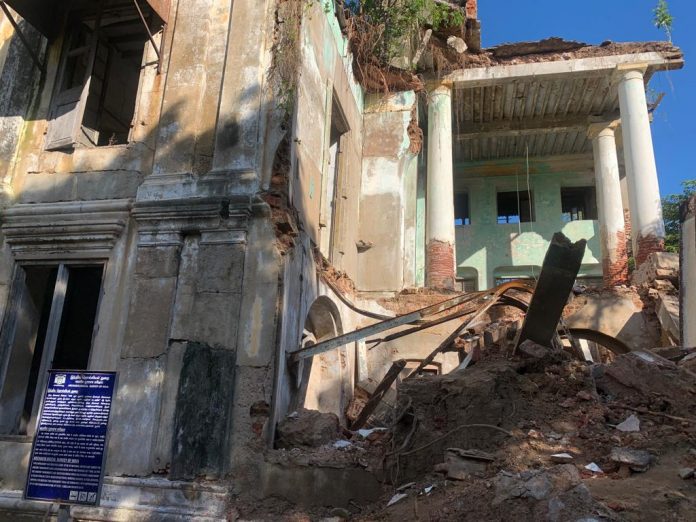 Chennai loses a slice of its past: Last House on the left of Snob's Alley

The famed Last House, one of the oldest protected monuments tucked away inside the sprawling Fort St George complex, and dates back to the 1690s, had even survived the bombings in 1746. But today, this historic structure, which is so interwoven with the growth of Chennai from a port city Madraspattinam into a bustling metropolis, is crumbling and is in ruins.

The Fort St George complex itself stands tall having served as the center of power for the British in the then Madras presidency. While officials in the secretariat (which functions inside the fort premises) and the general public are aware of the Archeological Survey of India (ASI)’s protected monuments inside the Fort such as the St Mary’s Church and the Museum, which are in good shape, not many are aware of the other heritage monuments, including the Last House.

This old multi-storied building or what remains of it is found on the left of St Thomas street or what is quaintly referred to as Snob’s Alley. It probably gets the name the Last House by virtue of being at the end of this street, which was once a fashionable thoroughfare in the distant past. Today, a portion of the Last House has been reduced to rubbles even though it was supported by several poles. Thick vegetation thriving inside and next to the building throws light on its neglected state.

In the recent rains that lashed the city, a portion of this unprotected ancient structure has collapsed, secretariat employees tell The Federal. Workers were busy clearing the debris at the site.

Amid the dust and rubble, an ASI board still occupies pride of place at the spot, ostensibly to provide information on this monument, which has been declared to be of national importance under the Ancient Monuments and Archaeological Sites and Remains Act, 1958. And it warns any person who destroys, defaces, alters, removes or misuses shall be punishable with two years of imprisonment or with a penalty upto ₹1 lakh or both.

This building was even listed as grade 1 (no alterations are permitted) by the High court of Madras based on the recommendations of the Justice E Padmanabhan committee.

Historians in Chennai are predictably upset. Veteran historian V Sriram, who wrote an article about how the Last House was on its last legs in his column Heritage Watch in March last year, blames the current state of the building on lack of maintenance and negligence.

“When I visited the monument about ten years ago, it was in good shape without any vegetation. I could enter the building and climb the stairs. The present state of the building is the result of lack of maintenance and complete negligence,” he says.

This is not an isolated case, historians point out that several protected monuments, including the Wellesley House inside the fort and Alagarkoil in Madurai are in bad shape. The Chennai circle of ASI, which comprises 16 districts and the Union Territory of Puducherry, has about 133 protected monuments, according to an ASI official.

The dilapidated condition of these monuments establish that the ASI neither has a vision nor a commitment to preserve them. Pointing out that officials take years to even complete their paperwork before commencing restoration works, he urges the ASI to speed up work on these sites.

“First, the department should modernise the system and display its protected monuments and sites along with its current status. Custodians, even if they are volunteers, should be appointed to protect these monuments. If they cannot  carry out the restoration works, it should be given to willing private organisations,” he suggests.

Also read: How a legend found its way to literature via a matchbox logo

Another historian, CR Elangovan believes a lot more needs to be done in terms of conservation and improvement though many of the protected monuments in western region are in good shape.

He explains that historical structures hold the key to the history of civilization and it is critical to conserve them. And, he recommends that the government should allocate more funds to the department and people with specific skills should be appointed in the department.

To encourage people to visit the monuments and understand its importance, professional guides should be deployed at all the sites, he avers, adding that  guides are deployed at a few places, including Sithanavasal in Pudukkottai district.

Historian Pradeep Chakravarthy however does not want to just pin the blame for the monumental neglect of these ancient structures on the ASI.  “We cannot just blame the ASI as they have been doing their best to preserve the monuments even though it is true that a lot more can be done. They have a lot of practical difficulties such as the remote location of the monuments, lack of funds and manpower shortage,” he says.

“Ideally, awareness should be created among the public and it is only with their support, sustainable preservation can be achieved. With the help of social media platforms, YouTube and OTT platforms, a lot of information about Indian history can be shared with the public to evoke interest,” he adds.

“Tamil Nadu has a lot of buildings with historical importance and the government should come forward to include more buildings under the umbrella of its protected monument list. Also, a group of monuments can be turned into an administrative mini-circle and it would be helpful to maintain them better,” says S Rajavelu, adjunct faculty, department of history, Alagappa University.

Meanwhile, the ASI is carrying out restoration works on an emergency basis at the Last House. M Kalimuthu, superintending archaeologist, ASI, tells The Federal that he has directed the officials to do the work. Moreover, the ASI is also conducting a survey to identify monuments that require immediate attention. “Once the survey is completed, a proposal would be sent to the central government seeking funds for the same,” he reveals. Is it too late to save a slice of Chennai’s 380-year-old history?