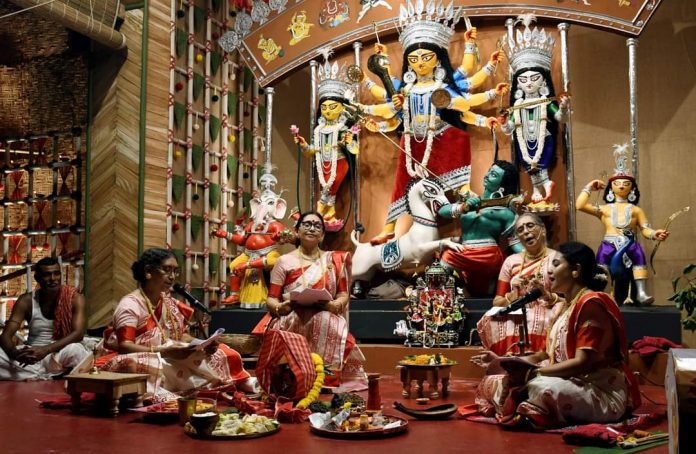 Remember the Durga idol depicted as a migrant-worker mother embarking on a journey home on foot with her children in tow, at a South Kolkata puja pandal last year?

This year the deity, again depicted as migrant worker, finds herself locked in a detention camp with her children, as the puja committee, the Barisha Club in Behala, decided to come up with a sequel to their earlier thought-provoking theme to depict an ongoing crisis.

The innovative theme called ‘Bhager Maa’ (Divided Mother) portrays the apprehension over the possible turmoil of thousands and thousands of migrant workers in the country if a nationwide National Register of Citizens (NRC) is implemented.

“Where will she go as a refugee? What will be her address? In which country that address would be? These are some pertinent questions we have tried to raise seeing the way the horrific memory of the partition is being raked up again,” says Rintu Das, the man behind the ‘Bhager Maa’ concept.

Such theme-based pujas, depicting the travails and triumphs of human life and other contemporary subjects have been a part of the annual celebration ever since the Jagat Mukherjee Park Durga puja committee in north Kolkata had decided to bring some innovation in pandal decoration way back in 1959. Back then the committee had hired a budding artist Ashok Gupta to deck up their marquee with elaborate murals.

“The country is gripped by the pandemic, deaths, conflicts…. With our unity theme, we want to promote strength of bondage amongst people. We are also paying homage to the humanist poet of Bengal, Sankha Ghosh, whom we lost this year due to COVID,” points out the joint secretary of the puja committee Dwaipayan Roy.

Also read: The sorrow of Bengal: Why Damodar is not what it was meant to be

The practice of using the annual festival as a mode of social messaging in fact precedes the concept of modern-day theme pujas, reveals a retired history professor, Apurba Chakraborty. “Those days, zamindars and other rich families, who mostly organised grand pujas, used to tweak rituals of the festival for such social causes,” he says.

Zamindar Sisir Banerjee of Raghunathganj in Murshidabad district introduced an inclusive ritual in his family puja some 350 years ago. Ostensibly, after getting instruction from the deity in his dream that all communities should be involved in the puja, Banerjee asked a Muslim woman who lived in the village to cook bhog (offerings) for the goddess.

The zamindari system had long been abolished and the zamindar puja celebrations is now no longer a family puja. All the people of the area, now called the Banerji Para of Raghunathganj, jointly organise the puja. But they continue to follow the old tradition, and Muslim families of the area still prepare the bhog that is offered to Durga.

Around the same time, another zamindar Baburam Sarkar of Arambagh introduced a ritual of commencing his family puja with the offering of namaaz by Muslims. The Sarkar bari of Arambagh has kept the tradition alive for over three centuries now.

The self-proclaimed defenders of the Hindu faith may find it shocking to know that worshiping a Muslim girl child, as a manifestation of Goddess Durga during the Kumari Puja ritual on Maha Ashtami day of the Durga Puja, is not very uncommon either in the state.

The pioneer of the tradition is none other than Swami Vivekananda. He had worshipped a four-year-old Kashmiri Muslim girl as the goddess during Kumari Puja at the Kheer Bhawani temple in Srinagar on August 18, 1898.

The Durga Puja is the harbinger of change, reflecting the need to break free from all kinds of dogmas and inequities and the theme-based pandals this year are the continuation of this tradition.

The latest addition to the tradition is the new precedent set by a South Kolkata puja organised by the 66 Pally Club. Breaking another social barrier, for the first time in the state, the entire puja rituals of the club are being performed by priestesses.

The 66 Pally approached the members of Shubhamastu’, a Kolkata-based collective of priestesses to conduct the puja rituals after their regular male priest passed away last year, says Pradyumna Mukherjee, the general secretary of the puja committee.

Members of Shubhamastu such as Dr Nandini Bhowmik, Ruma Roy, Semanti Banerjee, and Paulomi Chakraborty, have already stormed the male bastion by conducting social ceremonies like weddings and memorial services in the past. But helming a religious ceremony was uncharted territory for them.

Now that they have successfully traversed the new domain, their footsteps are likely to be emulated by others.