The country’s first carbon-neutral music tour Make Forests Not War by Goa-based indie singer-songwriter and urban ecologist Aditi Veena aka Ditty was on Saturday (March 14) postponed in the wake of the novel coronavirus spreading across the globe.

In a first for the country, Ditty’s carbon-neutral tour which started on Saturday (March 7) in Delhi, aimed to travel alone in various cities spreading the message and trying to be the change she wants to see was postponed.

Friends, the world is toppling over with fear and uncertainty. We have to stay strong, take precautions and take care of ourselves and our loved ones. 🌺 . My show in Baroda today continues but we've decided to postpone the rest of the #MakeForestsNotWar tour due to the spreading covid 19. Its a hard decision, but we feel it's the right thing to do! . . For all of you who bought tickets, they will be valid for the new dates. If you’d like a refund now, or once the new dates are released, please write to events@pagalhaina.com. You would of already received an email from the @pagalhaina team. . Thank you for your support, sending you all lots of love. Shows being postponed: Mumbai 15/3 Goa 18/3 Bangalore 21/3 Chennai 22/3 Hyderabad 25/3

The proceeds, in addition to funds raised online, will go towards planting an edible forest in north Goa, for which Ditty is also facilitating a permaculture course this April in Arambol.

The purpose of the forest is to eventually offset the carbon that’ll be emitted during this tour, which has been estimated as 3.5T for the entire tour. Interestingly, carbon emissions from taking three flights around the tour dates is estimated as 1000 kgs, close to that of as many as nine train journeys (1240 kgs).

Juxta positioning seemingly normal decisions with their calamitous impacts, Ditty said, “We’re mostly taking trains. We’ll play in nine cities over 20 days. We’re also trying to get friends and families to host us in each city, instead of staying in hotels, which causes so much energy and water wastage. This way, we’re also building a community instead of isolating ourselves.”

Gig venues, she said, will also be centrally located, so that concert-goers don’t have to travel from one end of the city to another which in turn creates more carbon.

Apart from this, in a first for Indian artists, Ditty is making a point to travel in cabs together instead of individually or in small groups, eat locally, reduce meat and dairy intake, and carry water bottles and rechargeable batteries individually. 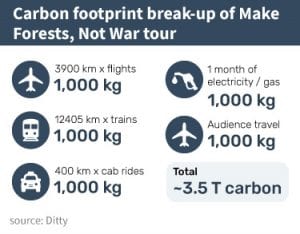 Going into the positives of the ‘greener’ choices made by them, the 30-year-old explains how it’s not just about emissions. “There’s not enough transition time while traveling in flights. When you arrive, everything is suddenly changed. Mentally, it wreaks havoc on our state of being. Buses and trains give us more time to adapt to this change,” she said, adding that, an additional benefit is also the money that is saved since taking hotels and flights is very expensive.

Describing the challenges she faced while planning a carbon-neutral tour, Ditty said, “A big challenge was to find other artists who’d do this with me. Usually people think in terms of how many shows they can play in a shorter period of days. But I feel like the whole purpose is to find your kind of people, I found mine. It’s about oneness with nature and each other.”

One might wonder when and how Ditty started connecting with nature, to which she said that it all started when she was studying architecture.

“It was an eye-opener. I was shocked when I realized that our world is finite but we’re living as if it’s infinite. I was like, why are we doing this? Why aren’t we designing in a better way for ourselves and the society? Over the years, I understood that I have to live consciously and pick opportunities to perform consciously, instead of saying yes to opportunities that would create impacts that are the opposite of what I sing about,” she said.

This connection with nature also seeps into her songs musically; evident as the theme of her mollifying album Poetry Ceylon–deemed debut album of the year by India Today — with some of the sounds recorded in her garden.

Related news: One for Mother Nature: Artistes around the globe and in India go green

Ditty’s manager Lucy Peters, who is also the co-founder of the indie record label Pagal Haina, told The Federal how the idea came about: “We started with doing a more conscious tour and it developed into a carbon-neutral one. Ditty and I keep discussing how we can have less impact on the climate.”

The artists will also collaborate with local environmentalists to talk about important issues, said Lucy, adding that “I’m no expert in ‘going green’. At this stage, it’s still at an individual level more than an organisational level. But Ditty has definitely made us all more aware. It’s a natural extension of who she is, and I feel blessed to be part of the journey.”

By the end of this year, setting up an organisation is on the cards. “It’ll be sort of like a charity, to help artists and business, or anyone really, offset the carbon footprint for their events by investing funds into afforestation projects through us,” she said.

Even as Ditty strongly suggested that the onus is on everybody, she hopes artists are driven to jump on this bandwagon, even if it’s just to keep up with the trend.

Related news: Politics and theatre: A story of the oppressed in Bengal

“The climate is changing so fast. We can’t catch up with it anyway. Every single one of us, not just artists, needs to live consciously now,” she said.

The singer also believes that the music industry needs to take a collective effort if things have to change. “There has to be more conversations about the mental health of musicians. A lot of us are extremely stressed out; it’s not easy taking this course. If we choose wisely instead of thinking I could’ve done more shows and made more money, others have to help us do that. Otherwise, we’ll suffer mentally,” she added.

Ditty is going to be playing in Delhi, Jaipur, Indore, Vadodara, Mumbai, Goa, Bengaluru, Chennai, and Hyderabad. The tickets can be bought from the links in their Instagram bio.

(The author is a Pune-based freelance journalist)

Cancel Eid relaxations or we will go to court, IMA tells Kerala govt...