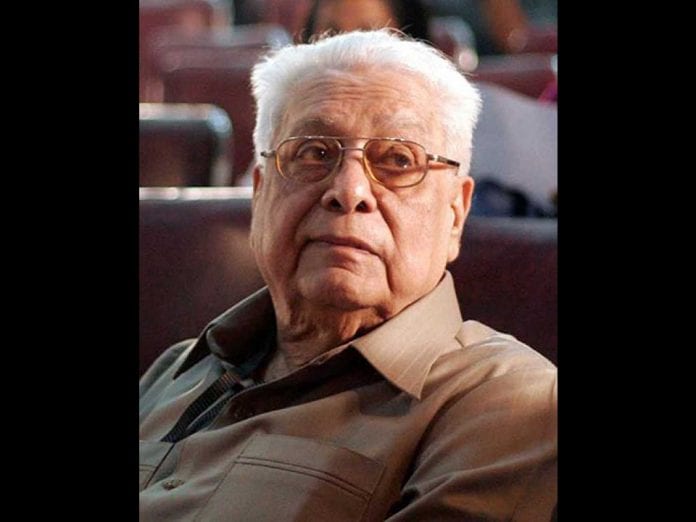 The tale of a persistent but shy man desperate to woo an office-going and comely woman, or the escapades of any average family residing at a chawl (Marathi term for a complex comprising housing units) in the Bombay of 1970s, were not formulaic.

Rather, these heart-warming stories have remained endearing and immortal, even decades after they were made. From the stable of filmmaker Basu Chatterjee, who turns 90 on January 10, 2020, one of the foremost proponents of middle-of-the-road movies, his is a genre of movies that takes the middle path, devoid of both the over-the-top treatment in mainstream cinema and the absolute reality of art cinema.

Long before writer Suketu Mehta coined the moniker ‘maximum city’ for Mumbai in his narrative non-fiction, Chatterjee had made the city, then Bombay, a character — a recurring theme — in many of his celebrated works.

In Piya Ka Ghar (1972), a newly wed Malti (Jaya Bhaduri) is left bewildered when she finds herself married into a joint family, living in one of the tiny homes in a crowded housing complex meant for working-class families.

Chatterjee introduces the viewers to the abundance of happiness and love that can dwell in the chawls, even as they cope with a limited supply of water and the lack of a private space. Malti reconciles with her newfound home, a doting husband and a caring family, far from the cosiness of her maayka (parents’ home) in her village, as she finds joys in the smallest of things that actually seem magnified in a big city.

Through the lifeline of the city, local trains, Chatterjee takes us through the love story of Tony (Amol Palekar) and Nancy (Tina Munim) in Baton Baton Mein (1979), where he narrates the story of a young Catholic couple which meets on train trips via Bandra and Victoria Terminus on work every day. Where taking the 8:10 am train matters the most and after love blossoms, thanks to constant egging by Uncle Tom (David) and over conversations on the beach, they have to fight it out to come together in the end. The odds they beat are not disapproving families or scheming villains, but overbearing mothers, pesky relatives and their own petty egos.

In the social drama Kamla ki Maut (1989), the chawl turns into the foreground for seeking answers on ethical issues. Following the suicide of a 20-year-old woman living in the quarters, that raises questions on her character, a lower-middle-class family has a moment of epiphany. They begin to closely examine their own lives after the incident — with their own debates on pre-marital sex, infidelity and modern-day relationships.

Basu’s Soudhamini or Mini of Swami (1977) or Deepa of Rajnigandha (1974) were in different settings — the former in rural Bengal and the latter in Delhi. Yet, they were both bound by the strength and depth of their roles. Mini (Shabana Azmi) is defiant and stubborn and questions every term and condition of her domestication, as she reluctantly adjusts with her marriage to a wheat trader Ghanshyam (Girish Karnad). On the other hand, Deepa (Vidya Sinha) is seen grappling with her sudden attraction to an ex-flame, measuring his attributes with that of her current love interest. Only to realise that the latter is her present, while the past has long moved on.

The romantic tale of Chitchor (1976), of mistaken identities starring Amol Palekar and Zarina Wahab, was actually the coming of age saga of Geeta (Zarina Wahab). She is fun loving, carefree and naïve, over musical sessions with Vinod (Palekar), whom she mistakes for her suitor, even as she discovers love and is gutsy enough to seek him, stepping out of the shadows, when the real suitor arrives.

Chamelì Ki Shaadi (1986) about Chameli (Amrita Singh) and her defiance to court the man, a wrestler Charandas (Anil Kapoor), is an outright exhibition of girl power. Chameli repeatedly fails in Class 8 but she can’t care less about the taunts by people. She is no wallflower who will take suppression by family that tries to talk her out of the relationship.  A laugh riot, the film also leaves a lot to ponder about the role of a woman willing to lead in a relationship and who makes no bones about it.

Much like Hrishikesh Mukherjee, who was a doyen in the same genre, Chatterjee found humour in the commonplace. In Chhoti Si Baat (1976), it is amid the drudgery of everyday commute between office and home that he portrays a timid Arun’s (played by Palekar) predicament over conveying his love for Prabha (Vidya Sinha).  Enter Colonel Julius Nagendranath Wilfred Singh (Ashok Kumar), who turns the tables on them, as he coaches Arun to pursue his love with confidence. It was often these quirky characters and situations that changed the course of his films.

For Dillagi (1978), he transposes Dharmendra, who was still fresh from the success of Chupke Chupke, as a chaste Hindi speaking botany professor. This time, as a Sanskrit professor in a girls college, Dharmendra plays Swarnkamal or jijaji, trying to impress a chemistry teacher Phoolrenu aka carbon dioxide (Hema Malini) who also has a silent and conniving admirer (Deven Verma).

Adapting the 1968 Hollywood flick Yours, Mine and Ours starring Henry Fonda and Lucille Ball, Khatta Meetha (1978) was a tale of  a Parsi family, with seven children — including step brothers and sisters — fighting with each other, as their parents have chosen to marry.

Sparring families have inspired Mukherjee to make films like Bawarchi (1972) on the same premise. One of the first films to weave a story around the small community, Khatta Meetha was a tribute to the race that has contributed immensely to the country, as revealed in the credits.

While he made movies across genres, Basu Chatterjee’s real genius was in weaving extraordinary tales from everyday lives of ordinary people, prompting us to celebrate life humming, Yeh jeevan hai is jeevan ka yahi hai, yahi hai, yahi hai rang roop (this is life, these are the colors of these life, this is the way of life).