Currently, the video has over 87 million views, and features Playboy model Rose Romero. The song has been written, composed and produced by Badshah himself. Shot by Marlon Pena and choreographed by Greg Chapkis, the video has got Hollywood-like feeling with LA skyline in the background and a dance number to watch out for.

Known to create peppy party songs, the rapper has slowly risen to fame from a small-time Punjabi rapper, who started out his career with Yo Yo Honey Singh’s ‘Mafiya Mundeer’ gang. 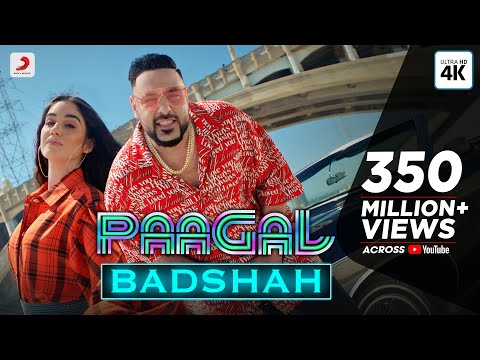 Time and again, his music and videos have broken records, albeit Indian. For example, his debut single, “DJ Waley Babu” featuring Aastha Gill, was ranked No. 1 on Indian iTunes charts within 24 hours of release. ‘Wakhra Swag’, where he collaborated with Punjabi singer Nav Inder, too was watched a record number of times.

Responding to the big news, Badshah, whose real name is Aditya Prateek Singh Sisodia, said, “I am ecstatic and I am overwhelmed with the amount of love we have received in the last 24 hours.”

“‘Paagal’ was made with the focused intent of taking music from India across borders and making our presence felt. My fans just went all out to help me achieve my dream. We’re going big with this one,” he added about the song, which released on Sony Music India’s YouTube channel and was also released on Instagram by the rapper.

“This is an unprecedented feat and we are very proud. This will go down in history because Badshah has become the first Indian artist to reach 75 million views in 24 hours,” Shridhar Subramaniam, President India and Middle East, Sony Music, said.

Before Badshah’s Pagal, BTS’ Boy With Luv was the most viewed YouTube video in 24 hours with 74 million views from the time of release, followed by Taylor Swift’s ‘Look at What You Made Me Do’.

As the news caught the frenzy of people across the globe, it has also raised criticism, mostly from fans of Taylor Swift and BTS who are calling it a paid gimmick to fake news.

Digital Music News even wrote that ‘A relatively unknown rapper has managed to achieve the feat using Google AdWords’, alleging that Badshah and Sony Music have paid Google and YouTube to set the world record.