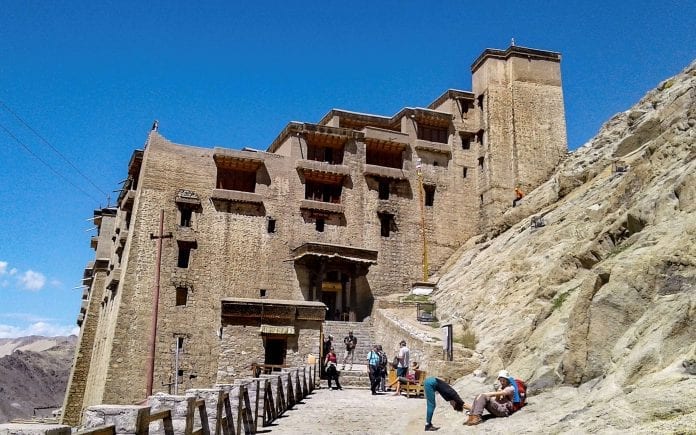 Skillful hands are carefully chipping away extraneous elements and adroitly removing graffiti to reveal the original beauty of age-old murals in 17th century-era Leh Palace as part of a painstaking restoration work currently underway at the monument.

The Archaeological Survey of India (ASI), which maintains the famed palace nestled in the mountains of Ladakh, recently began the restoration of the age-old wall art located on its sixth floor, officials said.

“The murals are made of natural colours, and that is one of the reasons it has survived the ravages of time and inharmonious interventions over the decades. It is perhaps the first time such an extensive restoration on murals have been taken up in the last 30 years or so at Leh,” a senior ASI official said.

The official, part of the core team of eight members working on the preservation, said, that the murals had been defaced by visitors with graffiti, some of which date back to late 1960s.

“About two weeks ago, the project began at the palace. Experts in chemical techniques have come from Chennai, Indore and Agra, assisted by other local staff members and labourers. The layering of extraneous elements, like plaster work had to be carefully removed,” he said.

An architectural masterpiece and an engineering feat of the Namgyal dynasty, the second dynasty of Ladakhi rulers, it was built in Tibetan style with materials such as stones, sun-dried mud bricks, woods of poplar, juniper and willow procured from different areas of Leh, according to the ASI.

“The construction of the palace was completed in a short span of only three years during the reign of Senge Namgyal (c. 1590-1635), the most illustrious king of Ladakh. The palace, overlooking the Leh city, has nine levels and an exquisite entrance gateway,” it said.

Asked about the design and span of the murals, the ASI official said, the paintings are spread across the walls measuring an area of about 32 sqm.

“As per the design, these murals done in a series of sorts, depict Buddhist symbols, like the spinning wheel, flowers and other religious motifs. It is beautiful, and people of Leh, who are rejoicing creation of a UT, are also delighted to see the old glory of the palace murals being brought back,” he said.

Sources said that the restoration work is likely to be completed by mid-September.

Ladakh will assume a new identity of a Union Territory on October 31. The palace is being maintained by ASIs Leh Mini Circle, constituted some years ago. Earlier it fell under Srinagar Circle of the ASI.

On the sixth level, the team can be seen carefully chipping away plaster work laid on the murals over the decades or putting daubs of paint on faded artwork with needle brushes.

Asked if there is any documented work on these arts, the ASI official said, “No documentation as such is there but we are taking reference of ancient Tibetan Thangkas, which are also painted with natural colours.”

He said an ASI team had worked on a restoration project some years ago at Thiksey Monastery in Thiksey area of Leh district, one of the most iconic buildings in Ladakh.

The Leh Palace comprises nine levels with over 100 rooms, however, purpose of only few of considerable importance are known. The rooms in the lower level served for use by staff, servants, and as storage silos.

“The palace is entered through an elaborately embellished wooden portico gate, known as Singe-sgo (the lion gate) at level two. At level four is a large open courtyard known as Khatok Chenmo, a platform for social and cultural activities of the royal family, as well as a royal shrine.

“The minister and other members were addressed by the king in the hall of audience on level five and the living quarters for royal family were reserved on level six,” reads the ASI plaque near the entrance.

The palace was in a ruined state when the ASI declared it as a Monument of National Importance in 1982. Since then, the ASI has carried out restoration and conservation work in a phased manner to revive the glory of the palace, visited by a large number of tourists daily.