The Indonesian Navy recently lost a submarine that sank off the coast of Bali, which was found split into three pieces on the seabed, killing all the 53 sailors on board. The submarine, KRI Nanggala 402, disappeared after it requested permission to dive during a live torpedo firing drill. The ill-fated Nanggala, like all submarines in peacetime, trains for war as effectively as possible, in the knowledge that this will contribute to its prevention.

The KRI Nanggala 402 was a Cakra class submarine of Type 209/1300 attack submarines developed by Howaldtswerke-Deutsche Werft of Germany, bought and commissioned by the Indonesian Navy in the 1980s. In 2012, the 44-year-old Nanggala underwent a refit or midlife upgrade to extend its serviceability for a few more years.

Every submarine hull has two major components, the light hull and the pressure hull. These are unique structures to hold water in them to enable the submarine maintain buoyancy underwater. The light hull is the outer non-watertight which provides the submarine a hydrodynamically efficient shape. The pressure hull withstands the hydrostatic pressure at a depth at which the submarine is designed to operate. Each submarine hull is designed to withstand the pressure up to a certain depth, beyond which it would simply crush due to the hydrostatic force at that depth. For this reason, every submarine has a diving depth. What decides the maximum crushing depth of the submarine is generally the thickness of the hull and the type of material. 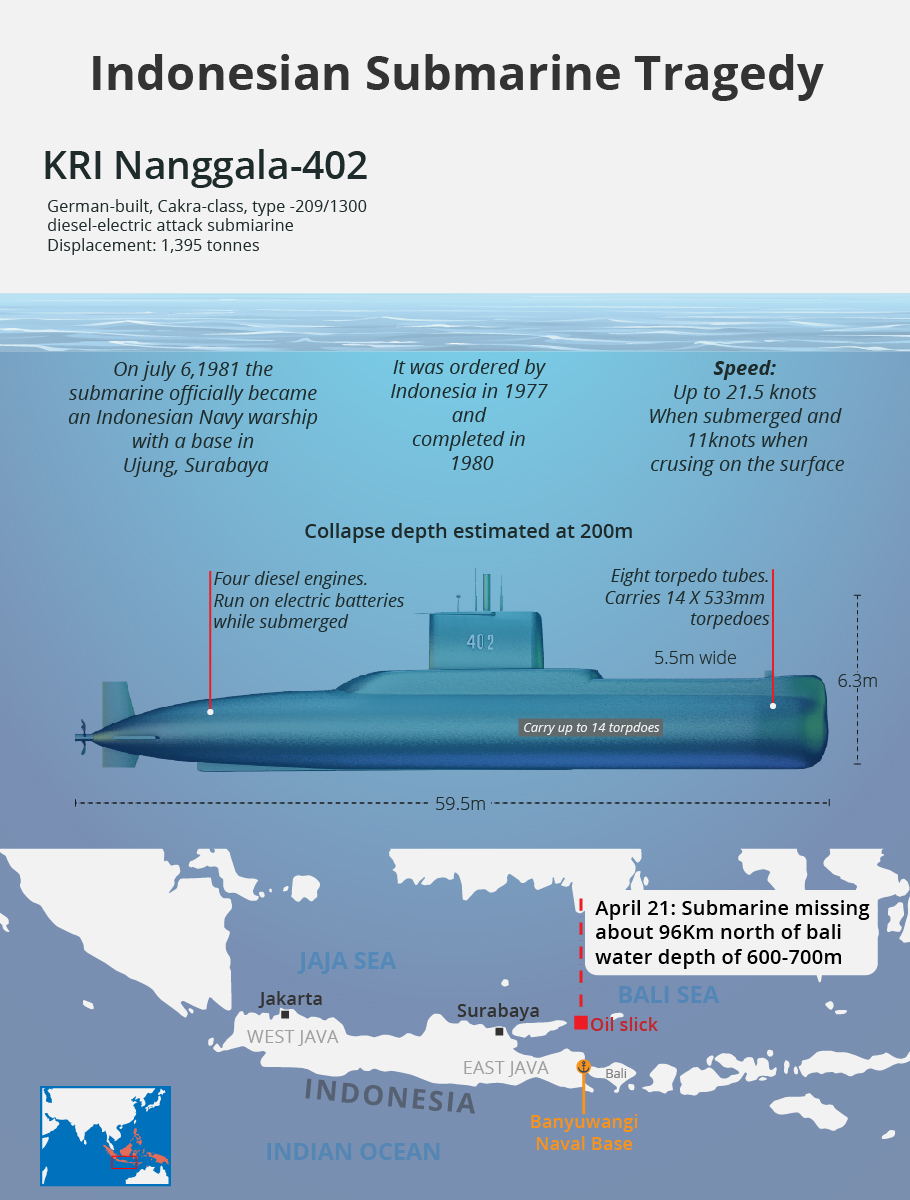 In the case of the Indonesian submarine, it was suspected to have a power failure which resulted in the malfunction of some control system and therefore, may have lost control and sunk beyond its crushing depth. It is highly impractical for a submarine to be designed to withstand a pressure up to 838 metres of water where it was found. This was what would have led to the submarine hull being broken into three pieces, as preliminary findings indicate.

The underwater environment is dangerous one and, therefore, submarines face many perils of the deep. Even a small fire or gas leak inside a submerged submarine can have catastrophic consequences. A collision with another vessel or grounding may be much more serious for a submarine than for a surface ship.

Very few submarines have been fitted with escape pods, but if sailors are trapped in a sunken submarine, there are other ways of getting them out safely. Locks allow submariners to escape by first climbing through an inner door or hatch and sealing it tightly behind themselves. They then partially flood the small volume before the outer hatch will swing open, but this two-door system means they do not need to flood the entire boat. Some navies have special mini-submarines that are small enough to fit aboard an aeroplane. These can be quickly flown to a sunken submarine and used to rescue the crew.

Several of the 40 odd countries which operate submarines have had their share of losses due to underwater accidents. These include countries like France, Israel, India and China, among others. However, given the sizes of the US and Russian submarine fleets and the intensity of their underwater operations, these two countries have suffered the maximum number of tragedies. In August 2000, the Russian nuclear-powered submarine K-141 Kursk vanished in the Barents Sea. Russian authorities later determined the vessel sank after a torpedo on board unexpectedly exploded. The first blast then triggered the explosion of several other warheads. In April 1963, the USS Thresher, an atomic submarine, sank in the Atlantic Ocean, killing its entire crew of 129 sailors and civilians when the submarine unexpectedly plunged to the seabed roughly 300 miles off the coast of New England. In between these two losses several nations have suffered severe underwater tragedies.

The Nanggala is similar to the Shishumar class submarine of the Indian Navy and come from the same German manufacturer. The Indian Navy commissioned its first submarine INS Kalvari in December 1967. INS Nistar served as a submarine rescue vessel starting 1971. Thereafter, from 1989 onwards INS Nireekshak functioned as a diving support vessel which also served as an interim submarine rescue vessel. Only in December 2018 the Indian Navy inducted two Deep Submergence Rescue Vessels to tackle challenges of its underwater fleet.

In the case of Nanggala, regional naval cooperation was possible due to the efforts of the International Submarine Escape and Rescue Liaison Office (ISMERLO), which aims to facilitate an international response for a distressed submarine and to improve the ability to respond to calls for assistance through its coordination role. Though ISMERLO is a NATO organization, it supports all submarine operating nations with a humanitarian objective to save lives at sea. It issued an  alert to coordinate the rescue of the disabled Indonesian submarine and the Indian, Singaporean and Malaysian navies swung into action to contribute their might. The Indian and Singaporean navies deployed their underwater rescue vehicles to get visual confirmation of the wreckage.

(The writer is Secretary, Institute of Contemporary Studies Bengaluru and a former Professor of International Relations and Strategic Studies, Christ Deemed to be University, Bengaluru)