Net-zero by 2070 – India’s pledge to control emissions has been the big news from the UN Climate Change Conference at Glasgow so far. Not least because the announcement of a net-zero target by Prime Minister Narendra Modi took everybody by surprise. For much of the year, India’s position on net-zero – the term refers to removing from the atmosphere as much greenhouse gases as are produced – and the possible paths it can take towards that threshold, have been the subject of keen discussion among climate change experts in the run-up to the meet.

But what do these targets mean? And are they feasible?

For a start, here’s the context of these discussions: after China, USA and the European Union, India is the fourth largest global emitter of carbon dioxide despite its low per capita emissions. The country’s per capita emissions are at 1.9 tonne annually, low by global standards. But so is India’s per capita energy consumption. “Our per capita energy consumption and emission is the lowest among G20 countries,” says Samrat Sengupta, programme director, climate change and energy, at the Centre for Science and Environment (CSE). 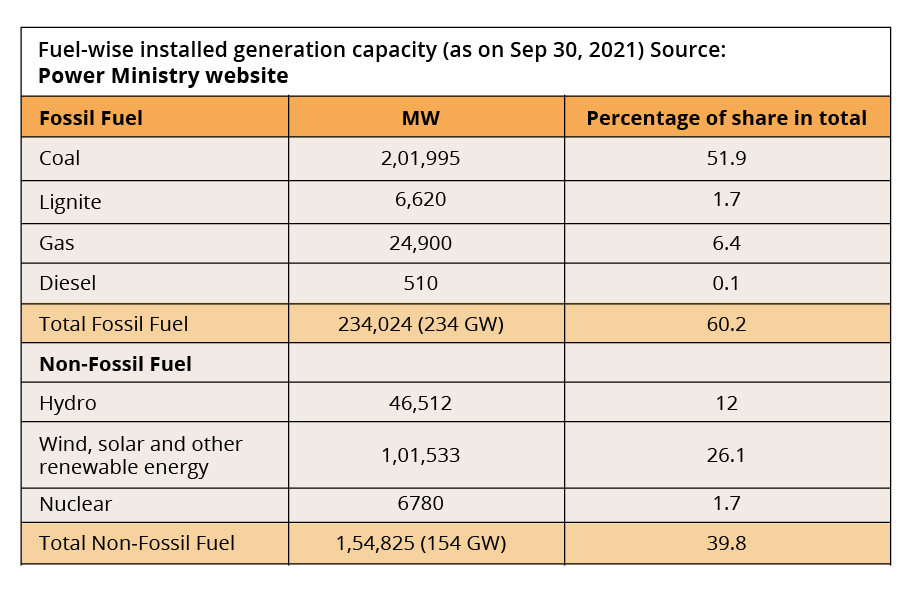 Also read: All eyes on COP26 as carbon emissions return to pre-pandemic levels

“From a development, as well as equity perspective, we need to first bring a large population to a minimum standard of living. That will enhance energy consumption as well as related emission,” says Sengupta. “But on the other hand, most of our infrastructure development… 70 per cent of what will be required by 2030… is still not built. So there is a greenfield opportunity.”

Currently, the country’s carbon dioxide emissions are 2.88 gigatonne a year (a gigatonne is equal to a billion metric tonnes). Assuming a business-as-usual scenario, CSE estimates that emissions would reach 4.48 gigatonne in 2030. In terms of per capita, however, this would still be lower than the US and China.

Naturally, the country’s energy use is set to grow rapidly, even accounting for the impact, and the uncertainties, caused by the coronavirus pandemic. For perspective, per capita energy demand in India has grown by over 60 per cent since 2000, of course with all its inherent inequities, according to the International Energy Agency’s India Energy Outlook 2021.

India is also the world’s third‐largest energy consuming country, it notes. “To meet growth in electricity demand over the next twenty years, India will need to add a power system the size of the European Union to what it has now,” said the report released in February.

How that energy will be generated is, therefore, the key question. Currently, about 70 per cent of power generation is from coal – this is unlikely to change dramatically anytime soon, experts say. Indeed, about 60 GW of coal-fired capacity is still in the works. But dependence on coal should peak at some point and then taper off while cleaner fuels become dominant.

Coal-based power generation must peak by 2040 for a 2070 net-zero scenario, said the think-tank Council on Energy, Environment and Water (CEEW), in a report in October. That scenario would also require solar-based electricity generation capacity to reach 1689 GW, wind-based generation to 557 GW and nuclear capacity to 68 GW by 2050, it projected.

Currently, installed capacity for non-fossil fuel, excluding hydro, is a little over 100 GW out of the country’s total installed power generation capacity of 388 GW. A further 50 GW of renewables is under installation and 27 GW under tendering, the Ministry for New and Renewable Energy said in August.

The country stands fourth in the world in terms of installed renewable energy capacity.

Rather than the 2070 net-zero target, several experts appear more keen about the four other shorter-term pledges the PM made at Glasgow. These were:

“Net zero by 2070 will get headlines, but the 2030 pledges is where the action is,” tweeted Prof Navroz Dubash of the Centre for Policy Research. These targets, said CSE in a press release, were “bold and ambitious, but they will be immensely challenging as well to achieve”.

The target to reduce carbon dioxide emissions by one billion tonnes by 2030 translates into a 22 per cent cut in emissions from the business-as-usual scenario, said the CSE release. By that measure, India’s per capita emissions would be lower than all the industrialised countries. “It also means that we have committed to a transformation of our energy system and this when we still have the challenge of reaching affordable energy to millions in the country,” it said.

So far, India’s volume of emissions per unit of GDP (called emission intensity) have been within the target range committed to in the Intended Nationally Determined Contributions. The latest biennial update report submitted by India said that the country’s emission intensity had reduced by 24 percent during the period 2005-2016. With emission intensity declining by 1-2 percent annually, experts reckon the country will meet its the 33-35 per cent reduction (from 2005 level) target by 2030.

Total greenhouse gas emissions were 2.8 billion tonnes in 2016. The broad sectors that contributed the most to these emissions were: energy (75 per cent), agriculture (14 per cent) and industrial processes and product use (8 per cent).

Some of the key reasons for the reduction in emission intensity over the years, explains Samrat Sengupta, are the inclusion of renewable power in the energy mix, revision of vehicular emission standards, efficiencies in energy guzzling industries such as steel and cement and electrification. “Even in the future, we have to target for 100 per cent electrification of end-use energy.”

“To understand the scale of the transition we need to usher in,” wrote economist Vaibhav Chaturvedi of CEEW in a recent article in The Economic Times, “we need to register the fact that electricity comprises less than a fifth of the total energy needs of the industrial sector currently.”

Evidently, there is much heavy-lifting to be done, on many fronts – this includes access to capital, fixing electricity transmission and distribution, managing rapid urbanisation and so on. The road-map will become clearer as the specifics are spelled out, experts say.