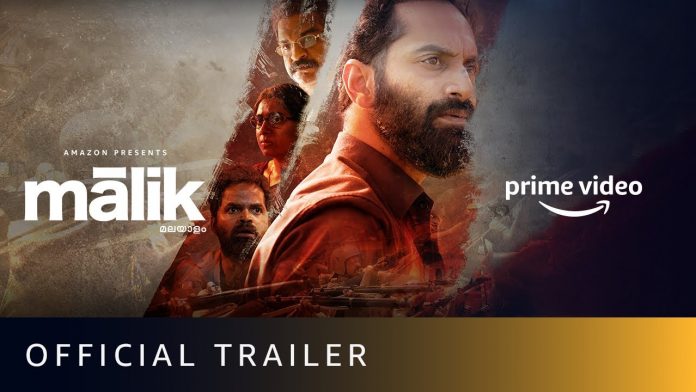 Written and directed by Mahesh Narayan, Malik centres around the life of Sulaiman Malik, a don-like character of a coastal community in Kerala and his battle with greedy land-grabbers

The trailer of the eagerly-awaited crime drama, Fahadh Faasil’s Malik, which will premiere on Amazon Prime on July 15, 2021, was unveiled on Tuesday (July 6).

Written and directed by Mahesh Narayan, the film centres around the life of Sulaiman Malik, a don-like character of a coastal community in Kerala, and his battle with greedy land-grabbers.

The trailer starts off with a young boy sitting on a beach looking out at sea with a female voice over stating that he (the boy) had nearly died when he was six, and she wished that he had died. The film comes across as a volatile, emotionally-charged drama as the trailer further has Fahad admitting to having chopped a character, ‘Chandran’ and thrown him into the sea. He challenges the police to lift him from amid the people of Ramadapally, who obviously will lay down their life for him.

In another scene, much like Dhanush in ‘Karnan’, Fahad makes a rousing speech to his people that no one can enter their land, including the police without their permission and that they know how to protect their land. There’s also people plotting to strangle him in jail.

Since Malik spans different time periods, you can also see an older Fahadh in the film.

An excited Fahadh Faasil said in a statement, “Collaborating with a brilliant director such as Mahesh Sir is always a pleasure. The storyline of Malik is truly very special to me and we have put our heart and soul into making this film.”

While Nimisha Sajayan, who plays the female lead pointed out, “The film has a very unconventional and unique narrative that spans different time periods which was quite challenging for me to perform.”

Fahadh Faasil’s Malik: A lengthy, complex epic with a politica...

Watch: Teaser of Prithviraj’s Cold Case, a thriller, set to re...