Karthik Subbaraj’s ‘Mahaan’ with Chiyaan Vikram and his son Dhruv, seems inspired by TV crime drama Breaking Bad. The trailer of the movie, which will release on Amazon Prime on February 10, dropped today. (February 3).

The two-minute-long trailer shows the transformation of Vikram’s character from a humble, Gandhian commerce school teacher into a badass liquor baron. In Breaking Bad, Walter White, the protagonist, who learns he has cancer uses his knowledge in chemistry to cook meth and distribute it to make quick money and secure his family’s future before he dies. He also feels that his knowledge is undervalued and wants to hit back.

In Mahaan, the trailer shows Vikram as a working-class, Gandhian commerce teacher bullied by his students at school. His wife, played by Simran, yells at him for a small deduction in his salary and he feels small and frustrated. Then he takes to crime and becomes the kingpin of the illegal liquor business.

Dhruv, the real-life son of Vikram, will be seen as ‘Dada’, who locks horns with his father Mahaan. As usual, we can see Karthik Subbaraj’s signature tribute to Quentin Tarantino’s films and this time it is Hateful Eight, where we see Vikram wearing a poncho, cowboy and shooting with two revolvers. 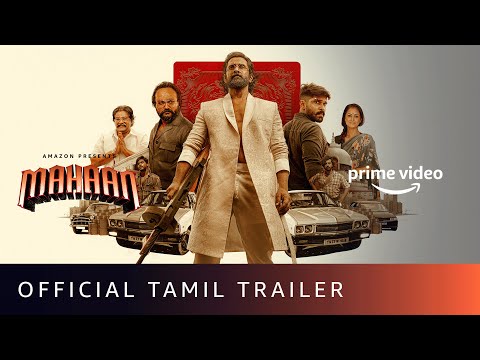 The official synopsis however said, Mahaan is a story about an ordinary man, who has a regular job and a small family with a wife and a son. He lives a very ordinary life, never breaking a code or crossing a line, and his day’s chores are in sync with the sunrise and sunset. One fine day, when he steps out of line for the very first time in his adult life, all hell breaks loose and his family leaves him. He then joins hands with a long-lost friend from his childhood and becomes a billionaire living his life king-size. However, he misses his son every day and life comes full circle for him, when one fine day his son comes back in his life in an extraordinary situation. What happens next is a thrilling, action-packed roller coaster ride.

Vikram said in a statement, “Mahaan is, of course, also an extra special film for me – one, as I reach a milestone in my cinematic journey with this being my 60th film, and secondly as my son Dhruv Vikram is playing my reel-life son in it.” While Dhruv said, “Mahaan is very special to me as this is the first time I am getting to share screen space with my father and that too in a role portraying his son. He is a very talented man with an excellent understanding of the craft and I have so much to learn from him,” said Dhruv Vikram.

Talking about her character Nachi, Simran said, “My character in the movie, is a humble and simple-hearted woman leading a simple life with her small and loving family, and how her world crashes when her husband strays from the path of an ideological life.”

Santhosh Narayanan has composed the music album and background score in this action thriller, which will release on Amazon Prime Video on February 10.